God Parent :Palaemon (could theoretically change to any other parent however I would have to redo the entire history) 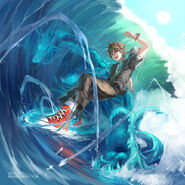 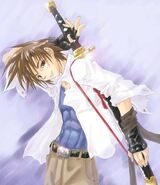 Personality: Alfonse has some major anger and depression issues, however those are to be expected of any veteran, especially one who was driven to Piracy. Despite this, he is actually very kind, happy, loyal and funny, due to the fact that he has finally found the home he has so long been searching for. He doesn't exactly understand technology very well, and it is a good thing phones aren't usually used at camp or he would probably go insane trying to figure one out.

History: Lt. Commander Alfonse Domville was born in the October of 1699 in the English Colonies of New England to Samantha Domville and an unknown sailor from Spain who ran off weeks after they discovered Samantha was pregnant. Alfonse did not have a nice life early on, his mother was poor and he could barely afford any education. He started working at age eight, delivering the daily newspaper, however he was soon fired after his employer discovered that he had skipped the delivery of multiple papers each day to take a swim in the local lake. Afterwards his mother began to abuse him as he was the primary source of income coming to the house. At age twelve he ran away from his home to go and join the military, however, after discovering that he was still four years too young to join the actual military, he decided to enlist as a Paramilitary Privateer, excited that he would get to sail the ocean. And so, he left on a large former Spanish Trades Ship dubbed "The Entrepreneur" to Quebec, Canada where he and his fellow privateers would help in the conquest of Acadia in the hopes to expand New England's territory. In 1713, after multiple years at sea a peace treaty was signed between the forces of France, Spain and Britain, ending the War of the Spanish Succession and the Queene Anne's War. After being discharged from the Privateers on the front that they were no longer needed for battle, Alfonse went back to the only place where he could think to go, his mothers old house in New England. His mother was ripe with rage and began to whip him, however Alfonse, now a seasoned Veteran of the British Military was quick to defend himself, slamming his mother into the wall and creating a large gash down his mother's arm. She began to bleed quite a lot, and as the smell of flesh blood entered his nostrils Alfonse found that he could no longer control himself. After hearing a scream, several of the local townspeople rushed into the house, where they were met by a gruesome sight. Alfonse was hovering above his mother, sword dripping with blood, his teeth suddenly sharp and jagged like some sort of vicious predator. Samantha Domville was most assuredly dead, long gashes ran down her neck, head and back and her limbs had been sliced off. It took more than forty trained British Soldiers, however Alfonse was eventually arrested and brought on a military ship out to sea where he was to be executed.

Alfonse was covered with blood and fat before he was chained to the anchor and thrown out into shark infested waters. The soldiers waited a few minutes to see Alfonse' Body float up to the surface, however, what emerged from the depths was quite the opposite. It seemed, Alfonse' teeth had gone razor sharp again and after biting the chain off of him, he somehow had managed to assume control of a great white shark and was now riding him towards the ship. Finding himself yet again unable to control himself due to the massive amount of blood that was covering him, he attacked and brutally killed everyone on the ship, taking it as his own and deciding upon a life of piracy.

In 1715, Alfonse joined in on the massive raid on Spanish divers trying to recover gold from a sunken Galleon near Florida. Along with various other former English Privateers, Alfonse would be enshrined in Notoriety after the raid proved successful and they had claimed the loot as their own. After that, Alfonse began to target the large shipping business between Africa, the Caribbean and Europe (also known as the triangular trade) taking new crew members from slave workers on the ships he attacked along with a plethora of rum and gold.

Yes, all was good for the young boy, that was, until one of his fellow pirates who had made base on the island of New Providence after the raids at Florida decided to do a raid of his own on Domville's beloved ship. Domville was sure he would defeat the pirate in battle due to his shark abilities, however, he found that the other pirate had supernatural abilities of his own. He possessed a fighting skill of the likes that Domville had never seen, and after Alfonse unhinged his jaw and showed his teeth, it seemed that the other pirate wasn't surprised at all. He explained that his name was Edward Teach, AKA the notorious Blackbeard, and that he shared a similar origin to Alfonse, explaining that they both had parents who were gods. His father was Ares, God of War, and suspected that Alfonse was the son of Palaemon, the god of sharks. He went even further to explain that Alfonse probably had several other abilities that he was not aware of, such as the ability to turn into a full shark himself. Not wanting to get into any trouble with another half-blood, Blackbeard happily left Domville's ship alone, however to get revenge for his initial planning of the raid, Domville led Lt. Robert Maynard of the HMS Pearl into Blackbeard's trail, something that would soon lead to his beheading.

The idea of becoming a shark intrigued Domville, and after staying up many a night thinking about it, he finally found out a way that he could leave his old life as a pirate and a killer which he despised so much behind and look towards a brighter and better future. He decided that he would become a shark for as long as a shark could live (about 40-50 years at a maximum) and then spend half a year as a human again, hoping to find a place where he would be welcome. If that did not work, he would spend another 40-50 years before spending another half year as a human, and so on and so on until he found a place where he felt welcome. Alfonse continued this strategy six times, before, at the physical Age of Nineteen (although he had lived 295 years as a shark) he found Camp Half-Blood, a place where people like him were welcome and treated with care. Happily, he decided he would live the rest of his life in this time, spending as much of it as he could at this wonderful, wonderful place.

His Cutlass from his Privateer Days. He had the edges coated in Celestial Bronze.

His Queen Anne Style Percussion Pistol. It can't hurt monsters due to the fact that it fires normal bullets, however it still has it's uses. 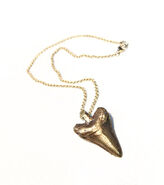 His Queen Anne Style Percussion Pistol. It can't hurt monsters due to the fact that it fires normal bullets, however it still has it's uses.
Add a photo to this gallery

This claim has been approved as a child of Palaemon. You now need to make a page for them and a word bubble, if you aren't sure how to do this you can see the guide here. Once you have done that you can add your character's name to the cabin list located on the cabin pages and start role playing with your new character. If you have any questions feel free to ask a member of the Admin team.

Retrieved from "https://camphalfbloodroleplay.fandom.com/wiki/Claiming:Camp/Alfonse_Domville?oldid=1200102"
Community content is available under CC-BY-SA unless otherwise noted.