Appearance:Amelia has midnight black hair and dreamy blue eyes, she has pale skin and a slim figure, she is never seen without jewellery, and always has her nails done in crazy colours and designs. She loves clothes and can be seen wearing almost anything. 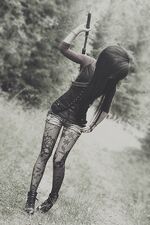 Personality:Amelia is very friendly and outgoing with her friends, but when in public she uses a mask to cover up her true self, as she is scared of what people think of her, so, when in public she's a mean and spiteful little b*tch that craves attention. She can be quite nosey and always wanting to know what everyone is doing, where someone or thing is and what everything does. She has 2 weaknesses, golf and shoes, she loves them to death, she even said she wants to die holding a golf club and wearing Gucci shoes.

History:I was born to Rhianne Dusk, a young, non-professional, model and Hermes, who was posing as a semi-professional Irish golfer from a town in County Donegal, they met in a golf course where my mother was working part-time. Apon first sight she fell in love with him and the night before the compitition she dragged him off to her room and.......well you get the idea. So yeah, soon my mother got pregnant with me and she was super happy. Until a few days after I was born, my father told her he had to leave and told her he'd send her a letter once a year and left, but forgot to tell her of his true nature. Hermes stuck by his promise and sent a letter every year, telling her about his exciting but fake adventures. Rhianne kept these letters in hope of showing them to me, of course, I was too nosey for my own good and stumbled apon the letters myself. However this had disastrous results...

Hermes had enchanted to letter you see, so that if a demigod touched them they would learn about the fact that they was a demigod and that the Greek gods were real, etc., I passed out because of the trauma and my mother quickly rushed to the hospital, Hermes had stationed a satyr here as he knew I would pass out and be rushed to hospital by my mother, I awoke to find the doctor, aka Kennith checking my blood pressure, he smiled at me and left hastily. He came back the next day and closed the curtains, then he told me everything, I knew most of it, like I was a demigod etc. but I didn't know there was a camp for demigods just like me to go to. I asked him to take me, but before he could answer, a hellhound smashed through the window, it was about to kill me when another demigod came and killed it. The nurses were rushing around panicked and flustered. The demigod introduced himself as Butch Heart, and told me that he was here to take me to camp, he seemed more experienced than Kennith at fighting, so I decided to go with him instead. Suddenly Kennith came up and told us he's coming as well just to be safe, as two demigods would be a lot less dangerous if a satyr came as well, just incase. Kennith and Butch decided not to tell my mother, as she didn't know anything about camp, demigods, etc. as my father never told her. We eventually arrived at Half-Blood Hill, when a harpy attacked up from behind, sadly Butch was killed during the attack and Kennith was seriously injured, I, however, only had a minor slash on my arm before a camper came and saved me, I've been living at camp ever since.

Weapons:A silver golf club that turns into a CB sword with a beautifully engraved pommel and hilt.

Butch was there 'cause Kennith wasn't that skilled at fighting, and of course Amelia wouldn't be either, so he was sent to keep an eye on Kennith incase any monsters attacked which an untrained demigod and a satyr couldn't fight off. ♥Fear my............horrible writing skills♥

This claim has been approved as child of Hermes. You now need to make a page for them and a word bubble, if you aren't sure how to do this you can see the guide here. Once you have done that you can add your character's name to the cabin list located on the cabin pages and start role playing with your new character. If you have any questions feel free to ask a member of the Admin team.

Retrieved from "https://camphalfbloodroleplay.fandom.com/wiki/Claiming:Camp/Amelia_Dusk?oldid=1201141"
Community content is available under CC-BY-SA unless otherwise noted.