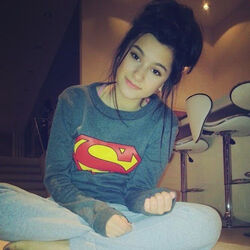 History: Amelia's mom, Delilah, was a Daughter of Apollo and great-great-granddaughter of Hermes, giving her a really bubbly, happy and outgoing. Amelia's Father, who went by the name Louis (Lou-ee), caught her eye and she caught his during a Halloween Party. Something of his cold and badass attitude lured her to him. They got to know each other for the rest of the party, but before the party ended, they had sex. From that night, Amelia was created.

What Delilah felt for Louis was merely an interest, not love. The next morning, when Delilah woke up in her friend's apartment (The party took place there), naked and sweaty, the first thing she saw was a note, bracelet, ring and two daggers, instead of Louis. She immediately grabbed the note and read it. It basically said who Louis truly was, that she was probably pregnant, how the weapons worked and what to do. Delilah already knew what to do if she was pregnant, as she was a demigoddess herself.

Delilah went through the pregnancy alone, as her mother was dead, her family cut all ties with her and her father couldn't help. Her closest friends visited her all the time, though. On one of those visits, her water broke. Panicky, Skylar, the friend that was visiting her, had to call her mom, who was a doctor.

Skylar's mom indeed came and helped Delilah give birth, as she cared for the young woman like a daughter. Anyways, after a few hours of cussing, pain, laughter and fainting (From Skylar), Baby Amelia was born.

Amelia's childhood was a happy one. Delilah found a job as a model, so after signing a contract, she began gaining lots of money. Rapidly. Delilah's model friends visited whenever they could, showering Amelia with lots of gifts. Amelia always took an interest in dancing and sports. Especially soccer and ice-skating. You could always find her in the ice-skating rink with her mom, in the nearby soccer field or in the dancing studio, where she took dancing classes.

When Amelia turned 7, Delilah was diagnosed with cancer. Amelia understood what was going on, but didn't fear. She knew death would always be there. The only thing Amelia feared was that her mom would die in a painful way. Two years later, Thanatos was busy with some mortal when he received a prayer. It was from Delilah, a woman he had done nine years before, she was in her death bed in a hospital. Thanatos then sent a death nymph of his to collect his daughter and take her to one if his priests.

The fates had cut Delilah's string by the time the nymph arrived.

The death nymph found a grieving Amelia. The nymph introduced herself as Lily and used the excuse that she was visiting a sick friend and helped Amelia through her grief, trying to convince her that Delilah was in a better place. She then explained that there was a man, her friend's uncle was lonely and needed company.

Amelia agreed to stay with him, though nobody could replace her mom. A few days later, she was with her new guardian. He had already been informed by Thanatos of her situation and he'd make sure she was fully trained before she got attacked. That's basically how she lived until she turned 12. She then found out who she really was.

When she came back from school at 4, she was greeted by Oliver & Lily (who had stayed to watch over her) they explained that Greek Gods were real, who they really were, about Camp, how her weapons worked, and well... everything except who her father was. They then told her a demigod would be coming three times a week to help her train until she went to camp.

For the following six months, she trained for 10 hours, 3 days a week. By the time six months passed, she was pretty damn good with a sword. While she walked in the woods, she was attacked by a hellhound. Frowning, she pressed her ring, sword appearing. The hound lunged and she dodged. She then swung her sword across it's neck and stomach, turning it into dust.

After a year of more training, she was attacked by a fire-breathing horse. Summoning her shield and sword, she began dodging, avoiding becoming a human torch. Every time the horse tried to burn her, she used her shield. When there was an opening, she lunged and swung her sword across it's legs and neck, slicing it's head off and turning it into dust. Training then continued.

Six Months later, she was attacked by a harpy in her backyard. Throwing her daggers at the thing's wings (thanks to the training she underwent), she injured them badly, probably prohibiting it from flying. She then lunged and swung her sword across it's chest, legs and arms, tuning it into dust. After this, the trainer thought she was a very well trained demigod, so training no longer continued. She did get a training session once a month, though.

Six months after that, she was attacked by a flock of stymphalian birds on her way home. Luckily, she was on a train station, so she simply boarded it and was soon on her way back home.

Six months after that attack, a hound attacks her. Using her shield, she dodges every attack and makes her own with her sword. She swings the sword across the thing's neck and stomach, turning it into dust.

Six months later, 15 1/2 year old Amelia had decided to finally go to camp. She told Oliver and Oliver agreed to take her. After saying their good-bye's in front of Camp Borders, being given a present by her nymph friend (the bow and quiver of CB arrows) and Oliver and Lily left, two hounds appeared. Amelia simply laughed and stepped into Camp, walking to the Camp Leader. While she talked with him, she was claimed by her father, Thanatos.

Weapons: Amelia has a silver ring with a black gem in the middle, which if pressed, a Celestial Bronze Sword named "Θάνατος Κομιστής" appears in her hand. She also has a Pandora Bracelet with many charms, but the most beautiful is the middle one. It's a letter A surrounded by an infinity sign and a heart in the middle. That charm, is pressed, turns into a beautiful shield with the following words engraved in it: "Ο θάνατος είναι αναπόφευκτος, ούτε δίκαιη ούτε και είναι η ζωή." She also has a bow and quiver full of arrows in case she doesn't want to use her sword and shield, and for long distance fights.

You current have a total of two active claims, you may only have one active at once. As such this claim will be placed on hold until Claiming:Camp/Ryan Black has been claimed/approved.

She didn't go sooner because she wouldn't be able to see Lily anymore. WE'RE

Who is Oliver? He was mentioned but not much stated. Also,how come her friend's uncle was immediately willing to let her stay?Such is life~ lol.

Oliver is the priest of Thanatos. The one who was going to be Amelia's guardian actually. And he was immediately willing because Thanatos had contacted him previously. Oliver knew about Greek Mythology being real, as he was clear-sighted, so he really wasn't fazed. WE'RE

Kindly go back to my previous comment and make any changes necessary for the un-fixed points that I have bolded.

This claim has been approved as a daughter of Thanatos. You now need to make a page for them and a word bubble, if you aren't sure how to do this you can see the guide here. Once you have done that you can add your character's name to the cabin list located on the cabin pages and start role playing with your new character. If you have any questions feel free to ask a member of the Admin team.

Retrieved from "https://camphalfbloodroleplay.fandom.com/wiki/Claiming:Camp/Amelia_Hunter?oldid=1802295"
Community content is available under CC-BY-SA unless otherwise noted.