(This is a Hunter claim) 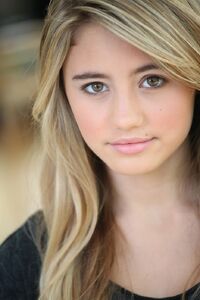 Amy is a smart, young girl who is very sweet and kind. She is also loyal to her friends and family. Being the daughter of the wisdom goddess, she learns quickly and loves to read, despite her dyslexia and ADHD. She is athletic, geeky, and a naturist. On the other hand, she is also stubborn and ambitious. She also may seem shy at first, but once you get to know her, she becomes very outgoing and fun to be with.

Tom was a clear sighted, smart, high class business man in his early 30s when he first met Athena. Athena saw how intelligent and successful the man was and thought that he would be a good person to father one of her kids.

He met her at a bar after a successful big day. He noticed her and flirted with her a bit. Later that night, he took her to his home and kissed her. She then explained to Tom who she was. He eventually believed her, and agreed to have a child.She explained how the process worked, and Tom did what she told him to do and soon, Amy was born. Immediately, Athena went back to Olympus to continue her duties.

Unfortunately, when Amy was 5 years old, Tom died from a brutal car crash. Amy was taken into foster care. She was treated badly, and when she was adopted, it didn't get any better. Her foster father was abusive and treated her more like a slave than a daughter. She was only allowed to bath once a month, and she was never given any new clothes. If she grew to big for them, she would still have to wear them for a few more months before he gave her old clothes that were her size.

She learned through getting any book she could find. Her dyslexia wasn't much of a help, but she spent whatever free time she had, unscrambling the words to figure out what they actually said. She discovered she could read Greek better than English when she discovered a book that was in Greek.

Due to Mark's(Mark is her foster father) odorous smell, Amy's scent was hidden for a very long time. She was 13, she was first attacked. She was planning on running away, so she had her bags all packed, and she was wandering the streets of New York, when all of a sudden a hellhound started charging her. She sprinted the other direction, hoping to outrun the large beast. She was suddenly hit with a massive paw which knocked her back. She was dazed for a few hours, but she could of sworn she saw a silver arrow pierce the hellhound, and killed it before she completely blacked out. She was stuck in a coma for awhile, but she woke up in an infirmary with her left arm and right leg broken, which was wrapped in secure bandages. She looked around to see a girl with black and silver outfit standing there. On the side table was a glass that looked almost like a milkshake and a small bowl with pudding like substances in it.

The girl explained to her what happened and that she was a nymph and huntress. She told Amy that she was a demigod, which was why she was attacked by the hellhound. She told her about the summer camp, which interested Amy, but she wanted to know if there were other options, so she also told her that she could become a huntress like herself. Amy was very interested at the idea of being a huntress and thought joining them would be best for her, as she had always had a rough life, and being with the Hunters would be like a fresh start in a way, but seeing it was a big decision, she wanted to wait.

The girl didn't take Amy immediately to camp so that she had time to heal, and she also helped train Amy, as she thought if Amy was to eventually become a huntress, she should know how to fight and protect herself from dangers. They trained at a small camp with a few other Hunters who had agreed to help Amy. They took turns taking guard to make sure monsters didn't hurt Amy.

After about 3 years of training, the girl then decided that Amy was ready to go to camp and make her decision. She followed the girl to camp. They arrived at camp, having to fight a few hellhounds on the way, due to Amy's growing scent.

She was claimed by Athena, but she decided to go join the Hunters and headed towards the cabins to officially join them. The girl(The Hunter, not Amy) actually left to find more recruits and did not stay for much longer afterwards.

Two silver daggers or a bow

"I want to be where the people are."~Ariel

This claim has not been edited for 8 days. If it reaches 8/26 with no edits it will be deleted for inactivity.

This claim has been approved as a huntress in Artemis' cabin. You now need to make a page for them and a word bubble, if you aren't sure how to do this you can see the guide here. Once you have done that you can add your character's name to the cabin list located on the cabin pages and start role playing with your new character. If you have any questions feel free to ask a member of the Admin team.

Retrieved from "https://camphalfbloodroleplay.fandom.com/wiki/Claiming:Camp/Amy_Barron?oldid=1456370"
Community content is available under CC-BY-SA unless otherwise noted.