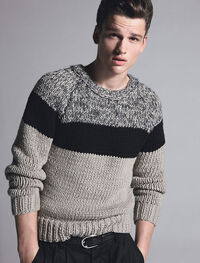 Personality: For a child of Ares, Anders is very introverted. His mother being a demigod, and knowing children of Ares, she taught him how to keep a level head, though sometimes he does lose it. At first you would think that he is a child of Athena, but sadly he is not. He meditates a lot to keep his temper in check.

History: Nov 8, 1943: Carmen Parker came from a wealthy family, she was very well off, she was also a daughter of Aphrodite. She wasn't like normal children of Aphrodite, however, she was charitable, even at only 23. She was a giver, a very peaceful, non-conceited woman, who used her beauty and grace to help others. On this particular night she was at a bar. It was about one year into WWII and she was just looking for something to take her mind off things. She was drinking alone, but it was in the good part of Manhattan and she needn't worry about anyone harassing her. However she did catch the eye of two men, two very powerful men, two gods named Ares and Hades. They knew instinctively that she was a demigod, and even better, that she was a daughter of Aphrodite. Her half-blood status was what drew them to her. She knew she was a demigod, so they had no qualms introducing themselves as their true identities. It was hard to believe at first, but when they subtly proved themselves, she had no doubts. However, she was not interested in affairs with the gods, so she left them both alone and defeated. Yet the gods were relentless. They showered her with gifts, jewelry, anything she could possibly want, it was a feud between the two. After months and months and months, she gave in. Perhaps it was the Aphrodite in her that made her choose the God of War over the King in the Underworld, but that was how the pieces fell. Ares was happy, though really all he wanted was sex, like most gods, he had come to fancy Carmen. Hades however was not as ecstatic, and he had a plan for Carmen. Deep down Carmen knew what Ares wanted as well, but still enjoyed their short time together. Yes, they did sleep together, and yes, she did get pregnant, and yes, Ares had to leave, but Carmen knew of this, and was OK with it. The day that Carmen and Ares found out she was pregnant, they were paid a visit by none other than Hades himself. He told them that he had put a curse upon their unborn child, that the day before he is to turn 18, he will fall ill, and die. Carmen and Ares knew that Hades was not a liar, but Carmen did not know what to do. Ares begged with the god of death not to kill his child, that it was not the child's fault. So Hades, liking the fact that the God of War was begging, loosened the terms of the contract. Hades would still take the child's soul one day before he reached adulthood, but, he would release the child back into the world the day after the child's mother, Carmen, was dead. Ares accepted those terms, and reluctantly, so did Carmen. Around five months later, April 5th, 1945, Carmen was gifted a baby boy, a son of Ares, whom she named Anders.

Being a demigod, Carmen knew what children of Ares were like, so she tried very hard to keep his temper down, while teaching him to hone his anger. From an early age Anders was told he was special, but weren't all kids? Carmen never told him about his father, only that he was a great man who cared deeply for his son, but could not stay, but she never elaborated on anything else. She never told him of the gods, or of his impending death, she even liked to pretend that it wasn't going to happen. Anders lived a very nice life, though he was born with a silver spoon in his mouth, he was taught by his mother to be charitable to all living things, and that he should be very humble. His grandfather, who had had Carmen with Aphrodite, knew of the situation and wasn't too concerned about his illegitimacy as other wealthy people at that time would've been, he knew that there would be monsters, so he hired bodyguards for his grandson, demigod bodyguards to be more specific.

The first attack happened at age 13, walking home from the cinema with his mother, their scent doubled, they were approached by a rather tall man, dressed in black, with one eye, who tried to take Anders. Quickly the situation was handled by their hired men, "killing" the man with one eye. There were a few more now and then, but Anders was very well protected, Carmen treated the guards like family, and they reciprocated. Another attack happened on his 17th birthday, a big celebration at the Parker's house, unbeknownst to everyone else that it would be his last. They had rented out a ballroom and it was a fabulous, and rather pretentious, display of wealth, but was soon interrupted by a loud barking. An unnaturally loud barking. Soon the barking found its way into the building, and soon into the ballroom. The guests were shocked at this disruption, men that seemed familiar to Anders filtered into the ballroom, this time with giant dogs, and began trashing the place. The guards moved swiftly, destroying all of the intruders and their large pets, the mortal guests saw the intruders being escorted out, Anders watched in horror as they all turned to piles of gold dust. Carmen searched frantically for her son, this was not the way she wanted him to find out about his lineage. When all was taken care of, the festivities continued, but Anders wasn't as into it as he previously was. After the party his mother told him to shake it off, that it was just the heat of the moment and that everything was fine.

The year went by slowly, Carmen had now made Anders take classes at home, instead of his usual private school. And slowly but surely, Anders became sick. It was subtle at first, a cough here or there, then he got pale, and visibly weaker, soon, if he ever got so much as a scratch, he would lose a ton of blood, so he was bed ridden. His mother told him that everything was OK, and that he would soon be better, she was only half lying. Two days before his 18th birthday, one day before his death, his mother never left his side. She told him she loved him a thousand times, and that soon he would be better. The next day he was dead.

Carmen never stopped mourning her son, and her father mourned with her. She never married again, never had any other children. They placed Anders in a tomb, knowing that one day he would come back to live again. Carmen grew old, her father died, and she mourned him too. She did keep her guards as company, they grew old with her, and had children of their own. Carmen was now 96 and on her deathbed. She knew it wouldn't be long before she passed on and her son came back, so she enlisted the help of a few half-blood children, she told them that when she was to die, which was any day now, that they were to go to her sons tomb, and retrieve him, for he would no longer be dead. A few days later she passed, and a day after that, her son felt the sun on his skin for the first time in half a century. Before the demigods took him to Camp, they gave him a letter written by his mother:

My dear son, if you are reading this I am dead. I have not been dead long. There are so many things I need to tell you. Fist, I love you, and I will always love you. Second, you are a half-blood, I don't expect you to know what that means at this point in time, but trust me, you will soon enough. Third, the world is a changed place from when we last talked, be careful, my son. And fourth, soon you will be reunited with more people like you, like us. They will be closer to you than I can ever be now. Be safe.

There was no time to cry, they had to get to camp, so away they went. When they made it to camp he was swiftly claimed by Ares.

Note: Checked this before it was posted so yea c:

This claim has been approved as a child of Ares. You now need to make a page for them and a word bubble, if you aren't sure how to do this you can see the guide here. Once you have done that you can add your character's name to the cabin list located on the cabin pages and start role playing with your new character. If you have any questions feel free to ask a member of the Admin team.

Retrieved from "https://camphalfbloodroleplay.fandom.com/wiki/Claiming:Camp/Anders_Parker?oldid=1645420"
Community content is available under CC-BY-SA unless otherwise noted.