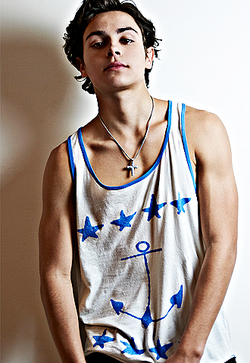 Personality: Andrew is cold and prefers his solitude, but commands himself by a set of specific morals, deciding for himself what is right or wrong. He's come to hate he name Tyler, and doesn't even speak of his past at all.

History: Thalia Michaels was raised a daughter of Aphrodite. However, even with her lineage, Thalia felt drawn to the thought of war. However, the family she was born into was against the heiress to their multi-billion dollar industry going off to fight for the country. When Thalia found out about Camp Half-Blood, she gladly ran away, joining in their endeavors.

When Thalia turned 18, the New Titan War was in full blossom. Thalia even participated in the defense of Manhattan. Luckily, her skills as a fighter led to her keeping her life, and safely being able to leave Camp Half-Blood to join the American Military. In the military, Thalia served only a single,being forced to charmspeak her way into the airforce, before coming home with a Purple Heart and a medal of honour for rescuing an entire platoon of marines.

She was part of a resupply operation, but the plane she used to get there was shot down over the firefight. Thalia landed behind enemy lines, and was shot in the head whilst using an enemy radia to call in for support.  Luckily, she was force fed Ambrosia by a fellow demigod squadmate before receiving too much damage to her brain. While her actions saved 20 Americans, it cost her her sanity. Back home, she tried to return to her family, but they shunned and disowned her for running away. She wanted to return to Camp, but didn't want them to see her as anything besides what she once was.

Alone and cold, Thalia took to the streets, selling her body to scrape by. One day, she came into contact with a god. She knew full well he was a god when they met, being the demigod she was, but she hadn't a clue who he was. He introduced himself as Ares, and Thalia fell for him immediately. She game him everything, starting with her body, and she was destroyed when "Ares" left her. Luckily, she beared a beautiful baby boy, and named his Tyler Michaels, after her father. She cherished everything about Tyler, babying him as much as a prostitute could. When Tyler turned 2, Thalia found a man for her, a regular mortal, and married him to give her litle bundle of joy a father to look up to. However, everything went down hill as Tyler came into his powers. Instead of demonstrating Ares-like abilities, Tyler acted like a child of Zeus (Poseidon, Hades) with Zeus (Poseidon, Hades) powers.

At eleven, Tyler was sought out by a small hellhound, only being able to evade it by running to his mother, who used her skills as a demigod to dispose of it easily. As she hugged him to make sure he was alright, she felt a spark in him. A spark that slowly grew to that of intense lightning, and she pulled away, disgusted as she found out his true father was not Ares.

At age twelve, Tyler had grown distant from his mother, and Thalia treated him like worthless trash, as he was not the son of Ares she hoped him to be. However, Thalia found for him one of his brothers, a son of Zeus to show him his powers.

This son of Zeus, Andrew, taught Tyler well, but he also taught Tyler to hate the gods, as they had done Andrew wrong. Andrew was a proud member of the Broken Covenant, and decided to take Tyler from his home in Wyoming to New York when he turned 15, to get him inducted into the BC.

On this journey, Tyler learned to think for himself, making for himself his own sense of right and wrong, and decided the gods were not to be hated, as the were only doing their jobs. In Virginia, nearly there, they came into contact with a Hydra. This Hydro has recently lost three heads, and rather than nine, he had 15. This Hydra made quick work of Andrew, but Tyler had easily surpassed his mentor in skill. Tyler bobbed and weaved, using lightning to cauterize the stumps he made out of the Hydra's necks. When the Hydra was defeated, Tyler looked upon Andrew's lifeless body, and decided he wanted to begin anew. Tyler dropped his old name, Tyler Michaels, and assumed the life of Andrew Malone, a nobody from the Broken Covenant.

Andrew found his way to BC on his own, killing monster after monster, developing quite the ability to deal with them. At the BC, he was disgusted.Everyone was against the rule of the gods, and some where killing innocent people, from what he heard. Luckily, Andrew drew no attention to himself, sleeping in the Liberi dorms, acting as best he could to the original's personality. Nobody could tell Andrew was not himself, even after his face had undergone significant changes and his age decreased.

The final straw was when Andrew came across a young man named Icarus. Icarus was the same age as Andrew, but Andrew could tell Icarus was far beyond his years. Icarus claimed to be proud of his body count, revisting every kill night after night, and always mentioning campers. One day, however, Icarus slipped up. Icarus told Andrew Camp's full name and location, expecting Andrew to want to kill campers as well. Andrew took this knowledge and strolled through camp gates, claimed as a son of Zeus (Poseidon Hades)

There's no way she would have been sent out into combat like that, especially in the marines.

Retrieved from "https://camphalfbloodroleplay.fandom.com/wiki/Claiming:Camp/Andrew_Malone?oldid=1200168"
Community content is available under CC-BY-SA unless otherwise noted.