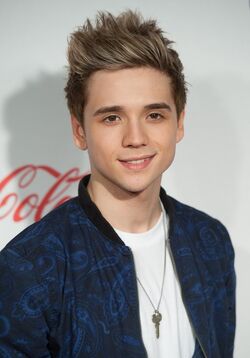 Personality: Arian is a violent thrill seeker who enjoys the sensation of a good fight above all else. He is immensely short tempered and has no issues giving into his rage and attacking someone no matter what, regardless of any consequences or how powerful the person may be. This is also due to his sheer stubbornness, hardly being the one to give up or change his mind on practically anything. He’s proud of his strength and fighting prowess and works every day to maintain it, hence why he tends to spend most of his time training. Aside from all of that, Arian is incredibly blunt and foul mouthed. Never afraid to speak his mind. Being annoyed by the people he deems weak and sensitive, often avoiding people like that. As long they’re not horrifically evil bastards, Arian can respect just about anyone who is strong and capable of handling themselves in a fight. He holds the Nike and Ares’ cabin in great regard due to their aspects over victory and war respectively, especially since the latter was once home to his father.

History: Jake Bridger was a well known son of Ares, having gone on countless quests for his father and having slain many monsters in his time as an active demigod. Being a strong warrior who had strived for victory every time had easily caught the attention of Nike. As a minor goddess who still wanted nothing less than to be considered a more important deity among her peers of Mount Olympus. Nike had heard about Jake while Ares was bragging about him after his latest quest. So Nike sought him out and found him while he was celebrating at a bar with his fellow demigod warriors. As Jake was drunk and having the time of his life, a rather lovely looking woman caught his attention and his buddies allowed him to leave and take her home.

The son of Ares had considered it the greatest night of his life, only downside was the woman was gone by morning. Like with possibly every child she conceived, Nike hoped the one born from her fling with Jake would be the famed demigod hero that would bring glory to her name. 3 months later, the baby that had been left at Jake’s doorstep had caused him to be rather shocked and confused. He knew what had happened with that nice piece of ass a few months back could’ve easily resulted in a child, but there was no way it could be born that fast unless it was a demigod as well.

Deducing his new son’s status as a demigod, Jake decided having a demigod son could be interesting. Having a strong child who could defend him from monsters in his elder years did seem like a good plan. Naming the baby Arian, the son of war decided he’d bring pride to his family name.

Arian had grown up seeing his father as a strong, violent and aggressive man and he served as the boy’s prime example of what it meant to be a man. Eager to emulate the behavior, Arian began picking fights with other children and give into his rage. While most parents would’ve punished the young bully, Jake was quite happy with how Arian was growing up. Encouraging this behavior, he placed his son in boxing classes so he could even be more of a menace.

After he turned 11, Jake had taught his son about his demigod heritage and it immediately went to Arian’s head. According to his father, he was 75% Greek God! As far as he was concerned, that had to make him better than regular people who were worried about school and jobs. Arian was then told about his father’s demigod adventures and strove to be just as great as him. Since the boy was bound to face monsters, Jake was sure to grant his son a celestial bronze xiphos that even turned into a simple lighter. Arian had quickly fell in love with the beloved hand me down.

As the boy approached puberty, Jake was curious to finally find out which goddess had gave him his son. He could tell the boy was strong and a natural fighter just like him. Jake was able to narrow it down to goddesses like Bia or Enyo. Arian’s mother had to be a goddess that focused on strength and power. Most likely a war goddess. Jake had to make sure his son had enough restraint not to accidentally kill any mortals in his usual scraps while ensuring he could slay any monster that got too close.

When Arian was 12, slaying the two harpies that wanted to devour him was painfully easy. Slicing them to pieces with his beloved xiphos was more thrilling than any fight he had previously been into. While most young demigods grew up fearing monster attacks, Arian had certainly anticipated them with excitement. As he turned 16, Arian had begun cutting school to hunt down monsters who saw him as a weak kid. Hellhounds, telekhines and harpies had offered him quick thrills and entertainment. He hadn’t cared about school anymore, graduating and going to college didn’t even matter to him.

He had been like this for a year, still killing monsters and hoping to be a legendary demigod hero just like his father. One day, the 17 year old had met a group of demigods coming back from a quest being attacked by an angry pack of cyclops. Tired, hungry and injured from their lack of food and ambrosia, Arian’s bold charge into battle had accidentally caused him to bellow a powerful war cry. Allowing them to fiercely slay the cyclops. The young heroes had thanked Arian even though he was more worried about the fight than rescuing them.

The demigods had seen what happened and begged Arian to come with them back to camp. Asking about the camp and being told about it, the son of victory had decided it’d be way more fun than returning his semi-normal life. He doubted his father would mind since he figured it’d help him become a famous hero just like him. The journey to camp was thrilling, well at least for him. Once he arrived he was claimed by Nike, the goddess of victory. Arian had thought it’d made plenty of sense since he made it a point to never lose a fight. So as a child of one of the most important cabins ever (At least to him), Arian was eager to begin his new life at camp. He hoped for strong opponents and the chance to lead his own quest, maybe take over his cabin too since he’d rather give orders than take them.

...Never thought I would get to do this to you hydro.. Still just one comment and then I'll claim it. The first attack would be earlier than 13 yeah I know he's a child of a minor goddess but remember the dad is a demigod too and wouldn't monster attack the dad notice there's more than one demigod? so 11 or 12 maybe earlier? but then again if you could argue your points to me I'll be happy to retract my comment no problem

Ehhh can I just drop it to 12? I hadn't considered the added scent thing from the dad. brocky and yorkie agree 14 is the oldest demigods can go without an attack, but i'll still change it cuz of the added scent issue. Hydrocarbon1997 (talk) 03:57, January 18, 2017 (UTC)

This claim has been approved as A son of Nike. You now need to make a page for them and a word bubble, if you aren't sure how to do this you can see the guide here. Once you have done that you can add your character's name to the cabin list located on the cabin pages and start role playing with your new character. If you have any questions feel free to ask a member of the Admin team.

Retrieved from "https://camphalfbloodroleplay.fandom.com/wiki/Claiming:Camp/Arian_Bridger?oldid=1727150"
Community content is available under CC-BY-SA unless otherwise noted.