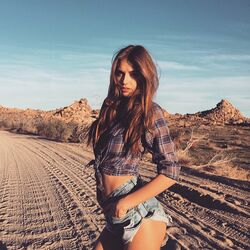 Personality: Ariel is a very smart girl who makes very bad decisions. Still lamenting about her deceased boyfriend, Ariel is very calm and reserved, but if you get to know her, she is very fun loving.

History: Richard Bishop was like any typical Manhattanite: good looking, rich, and of course, sleazy. He was a misogynistic asshole, actually. He refused to date anyone older than ten years his junior, so, at the ripe age of 30, he was dating fresh faced 20 year old college students. They never lasted long, most of them were gold-diggers, and most of them thought they were playing him, when really he was just using them for sex. Only once did Richard ever really "fall" for someone his same age. It was his 31st birthday party, he and his friends were at some upscale bar trying to pick up chicks (because what else do you do on your birthday), when Richard saw someone who caught his eye. She had jet black hair, sparkling pale blue eyes, and skin as white as snow. Clearly she was not the same type of 20 year old bimbo Richard usually went for, but something about her drew him in, she just had this air of mystery. When he approached her, using the best pick up line in his repertoire (which, of course wasn't that good), she promptly threw her drink in his face. This only made him want her more, no one had ever denied him sex. He tried again and again, until finally she broke, and let him talk to her. Her name, she said, was Melinoe, an odd name he thought, but nice nonetheless. After a few drinks, and some dumb bar banter, he took her home. Needless to say they had sex. When he woke up the next morning she wasn't there. As a matter of fact, it didn't look like anyone had been there at all, Richard couldn't decipher whether or not he had actually had sex the night before. For the next four months, this troubled him, until he arrived at his house, and there on his porch she sat, in her arms: a newborn child. He recognized her on the spot and was quite happy to see her, but when he saw the baby, he was not too thrilled. He invited them inside, she told him that she had had his child, and that her name was Ariel. She said that Ariel was a special girl, and that she'd need to be protected. She made him swear he would take care of her, she said she would stay with him for a couple more days, to help him get used to Ariel, but that she needed to go soon. The next day, when Richard woke up to the sound of Ariel crying, he found only a note reading "Remember your promise. -M".

Richard often times thought about how Melinoe had said that Ariel was a "special girl", but he just thought that's what parents thought about their children. Richard loved Ariel, or so he thought. He gave her a life of luxury, sent her to the best schools, dressed her in the best clothes. But something was always missing. The love part. He treated her more as a roommate really, while her entire life she thought of him as a parent. When she turned 15 that's when things started to change. Walking home from school, even with her friends, Ariel would have people following her. Something about them however, was off, maybe it was something about their eye, or eye, but she couldn't remember. Once, at age 16 they finally approached her and her friends. The man didn't go for any of her friends, but only for her. He grabbed her arm, and tried to full her away from her friends. She was able to slip out of his grasp, and run the short distance to her house. She told her father, and he called the police, from then on Ariel and her friends had a police escort to and from school.

At age 17 Ariel started to rebel from her father. She was old enough to know he didn't particularly care about her, and he was engaged to someone only two years older than her, Carmen, who smoked almost too much weed. Ariel started hanging out with the schools infamous drug dealers, most notable David. Ariel liked David, and David liked Ariel. They became extremely close. There was also Casey (David's ex), and Randy (who had something wrong with his legs). The day came when Richard Bishop got married to Carmen. That day was the day Ariel ran away from home. David, Ariel, Casey, and Randy had all ran away, traipsing the streets of New York City. Never had Ariel felt more free. She was finally living in the moment, living day-to-day with the people she loved most. The four of them made their money selling hard drugs on the street, and of course, using it in the process. Despite their drug use, Ariel and David were stronger than ever.

Many times, while living on the streets, did Ariel and her friends encounter strange things. Many times they would be followed by the same people that had stalked before. Once, after a drug deal, they were approached by some of the strange people. This time, the people brought dogs with them. They demanded that all four of them surrender and go with them, or face the consequences. Of course, being teenagers, they ran, and were followed by the dogs. It took awhile for them to realize that this situation was serious and that they might be in real danger. All four of them got split up along the way. Casey and David had gone one way, and Ariel was stuck with Randy going a different way. Randy wasn't a good runner, and frankly, was adamant about running in the first place. Finally Ariel stopped to a panting Randy, who explained to her he had a plan: he said they should find Casey and David, and he'll save the four of them. They tried to find them, and when they did, they were not happy. Right as they came up to where Casey and David were, they were greeted with the sight of Casey being ripped apart by the huge dogs. Quickly, Randy took a set of pipes out of his pocket. He began to play them, and suddenly vines came out of the ground, reaching for the dogs and squeezing them into nothing but gold powder. When the dogs were gone, they assumed all was well. Ariel began to approach David in an embrace when, out of nowhere, one of the strange, one-eyed, men came and stabbed David with a sword, killing him. Swiftly, Randy began to play the pipes, the vines doing the same to the one eyed man, but not before the last bit of life left David.

Ariel and Randy were the last ones standing. Ariel ran over to David, sobbing. Screaming at the sky to bring him back. Randy yelled at her to get it together, and to follow him, they didn't have much time before the others got to them as well. They ran through the streets of Manhattan, leaving Casey and David behind. Doing that was the hardest thing Ariel ever had to do. Randy explained to her that she was what they would call a "demigod", a child of a greek god and a mortal. And so were Casey and David, well, David at least. He said that David was the child of a minor god: Aglaea, and that he assumed she was too, and that that was why they didn't have too frequent monster attacks. She wasn't listening, she didn't care. She just wanted out of this, out of everything. Most of all she wanted what she could never get back: David. He took her to Camp Half Blood, where she lives now, but she hasn't forgotten about David. Weapons: Ring that turns into a sword

Note: A red this before it was in claiming and its good

This claim has been approved as a child of Melinoe. You now need to make a page for them and a word bubble, if you aren't sure how to do this you can see the guide here. Once you have done that you can add your character's name to the cabin list located on the cabin pages and start role playing with your new character. If you have any questions feel free to ask a member of the Admin team.

Retrieved from "https://camphalfbloodroleplay.fandom.com/wiki/Claiming:Camp/Ariel_Bishop?oldid=1613664"
Community content is available under CC-BY-SA unless otherwise noted.