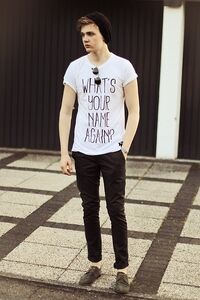 Personality: Basil, or as he prefers to be called, Sil is very friendly, making friends wherever he goes. A very outgoing boy, Sil likes to party and is quite the socialite. He likes to have fun and never smiles for pictures, as it thinks it's funny. Though he is quite the socialite, he can easily make things awkward for you.

Dawne Northrop was a demigod daughter of Aphrodite that obviously inherited her mother and well, her demigod siblings' beauty. She attracted the eyes of every man she encountered and sometimes it went too overboard as she would've been raped several times in her youth if it wasn't for her demigod powers. Although she had a choice of any man she wanted, Dawn couldn't find someone that she actually liked enough to spend her entire life with despite the thousands and thousands of dates she went on. One day, as she was just jamming with a guitar in Central Park, a handsome man walked up to her, holding a guitar as well. They spent the noon, just playing their guitars, people watching them. After that, well, he or the man who introduced himself as Sam, asked for her number, Dawne wanted to say no, but fortunately, the crowd was watching, so she just said yes.

A week later, the two of them met at a music festival, where they mingled a bit, had a few drinks but ultimately, got bored. Sam went on ahead to a bar where they would later meet up again, as Dawne wanted to enjoy the festival a bit more. Slightly drunk, she met a man, and they, they well, had "fun" in a bathroom. The man drove her off to the club, where Dawne met up with Sam. Curious who the man who drove Dawne to the club, Sam asked and Dawne in turn, slightly ashamed, said, that he was "just a friend". After hours of dancing and a few drinks here and there, Sam took Dawne to their apartment where they made love. The next day, she found out she was pregnant, but having no memories of the man she met at the festival, assumed it was Sam's. And on October 16, 1997, Basil "Sil" Arthur Windjoy Northrop was born to Dawne Windjoy and Sam Northrop.

About two years later Sil was born, his parents got hitched and moved to New Jersey, where Sam got a job offering as a doctor in Hackensack University Medical Center. At first, Dawne didn't know that her son was a demigod because of the fact that she'd only slept with Sam... or has she? Well, anyways, as soon as her child showed signs of both ADHD and dyslexia, she was sure that her son was a demigod.

Sil grew up pretty happily with everything he wanted; a good, rich family, a close group of friends, a few girlfriends here and there, sports, video games, and anything to fulfill his expectations. He was pretty popular as the power forward and MVP of his school's basketball team and as the fun, party boy, who DJ's at most parties. His mother usually protected him from monsters and eventually got a satyr to act as his best friend while protecting him.

The day before Sil turned 16, he found a note on his bed, saying:

At first he was a bit confused, because his father didn't come home, as he had a bunch of surgeries to perform. Nevertheless, he followed them anyway, and when he got to the place that the last instruction is telling him to go, there was a box, wrapped beautifully. He took it and went to his mom, like that note said. When he opened it, a gold watch was in it. He again, followed the instructions on the back, and stood back in awe as he witnessed the watch turn into a wooden recurve bow and a quiver. Dawne was right. Her son was a demigod.

She explained to her son how it did that and who his real father was. There was another note eith various notes written on it, they were on how to turn the bow back into a watch and a personal message for his mom. Dawne soon then packed up for Sil, and told him to come with her. She drove like a crazed lunatic to get to New York and to Camp, but on the way, they were attacked by a hellhound and about three harpies. His mom brought out a sword, and forcibly turned Sil's watch back to a bow. His mom took out the hellhound and two harpies, and just left the last harpie for Sil, to use as a living target practice. The rest of the road was just smooth sailing, and when they arrived at the arches of Camp, Dawne gave Sil a goodbye kiss on the forehead. Sil asked Dawne how she'd explain it to his dad, and she just said, "He'll understand.". Dawne signaled her son to go, and couldn't help herself and cried as her son crossed Camp's borders.

Retrieved from "https://camphalfbloodroleplay.fandom.com/wiki/Claiming:Camp/Basil_Northrop?oldid=1792616"
Community content is available under CC-BY-SA unless otherwise noted.