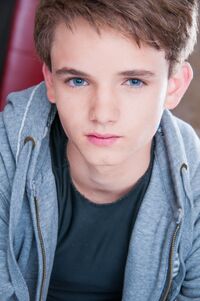 Personality: Benjamin was raised in a small town. His father’s job meant that he was left alone for a lot of time, and he spent his time playing make-believe. This means that he’s a little bit shy and insecure of himself. At times, he can be young for his age and act childishly. He never had anyone except his father, and Alex who he saw as an older brother. He wants to be wanted and needs to be needed. He latches onto people who fulfill these needs, and often blinkers himself to outside stimuli. He feels a constant need to prove himself and wants to make his father proud.

Dr Nicholas Carraway worked as a psychiatrist. All types of problems came through his door, kids with depression, anxiety, eating disorders and the like. Yet, even he couldn’t have prepared for a patient with the problems faced by a demi-god. He was a son of Hebe, suffering from PTSD. The guy suffered from paranoid delusions, of a monster attacking him in the dead of night. However, the child exhibited none of the behaviours associated with any known illnesses. Restricted by the law of direct interference, Hebe was forced to watch her son waste away.

Soon, a new patient arrived at the small town clinic. She was articulate, smart and looked extremely young for her apparent age. She was treated for general anxiety and depression, however, as she spoke, he got the impression that she wasn't fully honest with him. Eventually, the goddess broke down and confessed her worries for her son. She proved that she was telling the truth. Moved by her compassion, he agreed to help. The two eventually began to date. A baby was born several months later. Hebe had informed his father about what to expect, and he raised the child as his own. He named the child Benjamin, after the protagonist of his favourite TV series, M*A*S*H. He was a caring father, however he worked in the nearby city and had to commute often. This meant Ben was left with an array of local babysitters, trusted neighbours and stayed at home with his toys.

As Ben started to grow up, his powers began to slowly manifest. He seemed younger and more innocent than the other children, wilting flowers and fruit would often take on new life and he knew how to create ambrosia from thin air; his father had to be strict on that one. His father subsequently decided to establish a shelter for local demigods, living in the area or those on the way to the camp. Hebe spread the word, and it was a temporary safe haven. However, Ben saw Nicholas even less and less, as he treated the other demigods at all times of the day. He realised he wasn't the only kid with special abilities.

His dad grew concerned, that his son wouldn't be ready for his first monster attack. So, he enlisted the services of Alex, a demigod son of Hecate, who after leaving camp, had lived by himself, got a wife and then had a divorce. In return for counselling on his emotional issues, he agreed to train Ben for a couple of hours a week. Thus happened for a couple of years, and he gained an understanding of swordplay and began to actively use his powers.

At the age of twelve, a hellhound saw the two demigods training and attacked them. Taking this as an exercise, Alex helped Ben kill the monster, showing him how to ensure a clean and quick kill. Ben gained a few cuts and bruises but he did his best and the monster was promptly defeated.

Alex was satisfied Ben could handle himself for a couple more years before going to Camp Half Blood. Life went on as normal. When he was 15, they decided to go on a camping trip as a lesson in survival on the way to the camp. However, they were attacked by a large manticore. The two struggled to fight it off, and the son of Hecate was mortally wounded, as he defended Ben from a series of poisoned quills. As they fought, Lazarus Gein was watching and saved Ben’s life. Alex seemed to be poisoned and Laz sent him away to grab a satellite phone to call for help. While he was seemingly distracted, Laz killed the older demigod, wanting to train up the younger kid.

Mortified at Alex's death, Benny tried to resuscitate him. But Alex was already gone and his body burst into flames from over-exposure to the food of the gods. Lazarus convinced Benny that he should go straight to Camp Half-Blood with him. The two arrived a couple of weeks later, and Ben was officially claimed as a son of Hebe.

This claim has been approved as a child of Hebe. You now need to make a page for them and a word bubble, if you aren't sure how to do this you can see the guide here. Once you have done that you can add your character's name to the cabin list located on the cabin pages and start role playing with your new character. If you have any questions feel free to ask a member of the Admin team.

Retrieved from "https://camphalfbloodroleplay.fandom.com/wiki/Claiming:Camp/Benjamin_%22Benny%22_Carraway?oldid=1531584"
Community content is available under CC-BY-SA unless otherwise noted.