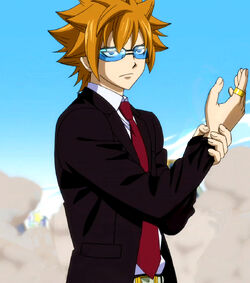 Personality: Blaise secretly cares for no one but helpless, any act of kindness or compassion will be convincing but truly fake. He acts nice so he can use people for his advantage and will show his true colors when the person is of no more use to him.

History:Tyler Stone was a son of Hebe in 1954, he lived in a small town in Nevada. Tyler was 22 and found a nice job at a local doctor. The town had a dark secret, many children would die before they reached the age of 12. Weak immune systems, heart diseases and cancer was too common among youth. Tyler did the best he could, disgusted at how many children got their lives cut too short.

Tyler wasn’t aware of it, but the town had a curse from Apollo. 50 years before, the main resource of the town was mining. Many Italian American immigrants were forced to work in the mines, including young boys. Two twin boys, fathered by Apollo: Arnaldo and Valentino. They were only 12 when they died in a mining accident.

Apollo was furious at how the townspeople allowed such young children to die. Many people didn’t care, so Apollo used his powers over health to curse the town. So many children wouldn’t live to become older than Arnaldo and Valentino. So for about 50 years, many parents there felt the same pain that Apollo felt all those years ago.

So the son of youth worked tirelessly, praying to his mother for guidance. Hebe told him about the curse and that she couldn’t do much about it, Tyler wasn’t happy. Later that night, Melinoe came to him and offered him a deal.

She was trying to produce more children and figured she could convince Apollo into lifting the curse. So if Melinoe was given a child from Tyler and he would agree to raise it, she’d get Apollo to undo the curse. So things happened and Melinoe was left impregnated,she had managed to seduce the sun god and got him to lift his curse.

A few weeks later when a baby boy appeared on his doorstep, Tyler accepted his role as a father and named him Blaise. Many of the children stopped becoming sick and Tyler couldn’t be happier. Things were finally looking bright for him.

The local cemetery has a very large children’s section, sometimes Tyler would brood over some of the children he lost. He had raised Blaise the best he could, the young man didn’t really know what it took to be a father and was always busy with his work and secretly fending off monsters. Blaise felt neglected, not gaining the attention he desired so much. School was somewhat awkward, since he didn’t seem too interested in making friends.

When he was 12, Blaise realized he was able to talk to ghosts. So from then on, he would spend most of his time speaking with the dead. Learning of the history of the town, in fact he spoke to many of the children affected by Apollo’s curse.

When he was 13, he was attacked by a flock of harpy. He accidentally turned himself intangible which protected him from otherwise fatal injuries, but when his energy waned he became tangible once more. But the harpies all seemed to become very old, right before being slain by Tyler wielding a Celestial Bronze sword. He explained how he and his son were both demigods, about camp and monsters. He explained how he could cause people to age since his mother was the goddess of youth. After finding out who his mother was, his intangible and ability to speak with ghosts made sense.

Tyler quickly escorted his son to Camp Half Blood personally, where he had spent a few years there. After finding out his father was a demigod, he visited him frequently. And finally grew quite close with him.

When Blaise was 16, he went on a quest with Mitch a son of Hades. He and the other questors were fighting a large dragon. As it blasted them with it’s deadly flame, Blaise reacted quickly enough to become intangible. Allowing him to survive, Mitch and his allies had painfully died.

He managed to return to camp safely, Hades was incredibly furious. Blaming him for Mitch’s death, he cursed Blaise to his scent would attract many more monsters than usual. Forcing to hide within the confines of camp for a year, allowing his hatred for Hades to fester. Hades wasn’t happy and knew he needed a way to lure him out.

He generated an Iris Message, making it seem like Blaise was speaking with his father. The message told him that his father was quite ill and was close to death. He decided to brave the monsters alone if it meant he could be with his father one last time.

When he was getting close to Nevada, the Clazmonian Sow attacked him right after he had withstood a number of attacks for the day. He didn’t have the energy to properly used his powers, so Blaise Stone had perished at the age of 17.

Becoming a ghost since he still wanted to see his father. But his life as a ghost came with two good factors. Hades couldn’t touch him, since Melinoe had protected the boy. Seeing as how he wasn’t a demigod anymore and wasn’t affected by direct interference. So from 1971, he remained a ghost safe from the wrath of the lord of the dead.

Hades realizes he cannot get to Blaise like this the way he is. He feints forgiving Blaise, saying that there was nothing he could’ve done to save Mitch. Hades ever agreed to allow him to live again, Melinoe and son were elated to hear this.

Blaise was fully restored as a demigod son of Melinoe, but after returning to camp he noticed something. He couldn’t feel anymore, he didn’t care about anyone in truth. Not able to care about his elderly father or any of his many siblings now at camp. Even when one of his half sisters died of cancer, Blaise didn’t care at all.

This was because Hades had secretly taken his soul from him, which meant the son of ghosts lacked any sort of conscious or any concern of what was right or wrong. He’d feint being a nice and caring person so people would be useful to him, but in truth he is truly a soulless bastard who shall only use people whenever possible.

Hydro let me read this earlier when he linked me before posting it. I know it's okay. (just in case people think it's weird that I claimed it like 3 seconds after he made it >.<)

This claim has been approved as a son of Melinoe. You now need to make a page for them and a word bubble, if you aren't sure how to do this you can see the guide here. Once you have done that you can add your character's name to the cabin list located on the cabin pages and start role playing with your new character. If you have any questions feel free to ask a member of the Admin team.

Retrieved from "https://camphalfbloodroleplay.fandom.com/wiki/Claiming:Camp/Blaise_Stone?oldid=1387187"
Community content is available under CC-BY-SA unless otherwise noted.