I'm done so go ahead and check it

Personality: Blake is very quiet and to himself a lot. He is very artistic but will not show any of his artworks in case nobody likes them. Blake also doesn't like confrontation and will stay out of it at any cost. He has a Australian accent that he gets from his grandfather 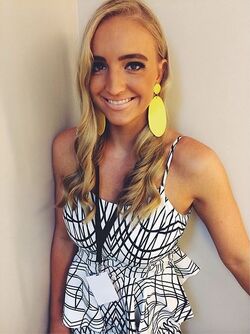 Personality: Zoe is the total opposite of her brother. She is very loud, likes to be around big crowds and loves to be the centre of attention. The only reason she would get in confrontation is if she has to. She has a New Zealand accent that she gets from her mother

Weapons: Glow stick that never turns off unless Zoe uses her powers. When it is snapped by a demigod, it turns into a 1m long long sword

Candice met Notus when she was touring Tasmanian. They were in the same tour. When she left for New Zealand Notus was on the same plane and next to her on back to New Zealand. When they got back to New Zealand, Candice asked Notus out on a date. Notus said yes and they went out on 3 more dates after the first one. One the third date they did the thing with the other thing (I don't like explaining that). When they found out Candice was pregnant , Notus spilled the beans that he was a greek god, that their child will be a demigod and what to do when the child has it's first monster attack. Notus stayed with Candice until Blake was born only living a katana hilt and a note that says "He will know what to do with it when he is ready".

Roughly a year later, Candice went back to work as a musican while Blake got looked dater his grandparents. One night after she finshed a perfomece with her band , a man offered to buy her a drink. After a few more drinks, Candice and the man started to hit it off. Later in that night, the man asked Candice if she wanted to come back to his place. Being a bit drunk, she accepted. It was an one night stand and Candice never saw the man again. A few months later, she found out she was pregnant again. A week after Zoe was born, the man returned and told Candice the same as Notus: that he is the greek god Apollo, and all that kind of stuff and left Zoe a glow stick. 2 years afte Zoe was born, Candice got married to Jack McCain, who was a navy officer who moved eveyone to Honolulu ,Hawaii 6 months after he got married to Blake and Zoe's mum. Candice told Jack what her children are so if they came to either of them about monsters.

Blake's first monster attack was at the age of 13, while he was doing sprinting training like he does every weekday. In the middle of training for the 100m, Blake saw a giant scorpion that was 3m big and was half way down the hill into the field. Blake immediately stopped running and started slowing backing away from the scorpion but the scorpion started towards Blake very fast. Blake ran the other way as fast as he can wishing there was somewhere to hide. Then all of a sudden, fog started to form around him and the scorpion. Now if I had something to fight that scorpion he thought to himself. As soon as Blake thought that, a sword of hot air formed in his hands and the fog disappeared. The scorpion instantly came straight at him and tried to sting him. Blake out of instinct swung the sword and cut off the scorpion's sting, then he threw the sword right at the scorpion and it turned to dust. Blake ran home as fast as he could and told his mother all about what just happened. She told him was a demigod (but not who his dad was) and so was his sister but don't tell her. Then she left Blake for a second to get the sword hilt and give it to Blake and told him to keep it with him at all times.

Zoe's first monster attack was a year later after Blake and at the same age as well. She was walking home from her friend's house when a massive flock of birds came after her. She screamed so loudly that the birds got disoriented. While the birds were disoriented Zoe ran away towards the field where her brother was training. Blake looked very surprised when he saw Zoe running towards him but then he noticed the massive flock of birds. He got his sword hilt out then trying it for the first time, put both his hands on the hilt and instantly the sword blade popped out. "Just think of a sword then it might appear in your hands" Blake said to Zoe. She did what her brother said and a sword made out of light appeared in her hands. In round about ten minutes the whole flock of birds were gone.

On the way home, Blake told everything he knew about what they are. When the arrived home they found their mother and step-father in a deep conversation. Blake and Zoe told their parents what just happened. They both answered all most at the same "Pack your bags we're going to New York". Jack and Candice took Zoe and Blake to camp. On the way to camp Candice gave Zoe a glow stick and told her if she ever needed a weapon just snap it. They were claimed by their father's a week after they arrived.

This claim has been approved as children of Notus/Apollo. You now need to make a page for them and a word bubble, if you aren't sure how to do this you can see the guide here. Once you have done that you can add your character's name to the cabin list located on the cabin pages and start role playing with your new character. If you have any questions feel free to ask a member of the Admin team.

Retrieved from "https://camphalfbloodroleplay.fandom.com/wiki/Claiming:Camp/Blake_and_Zoe_Yeves?oldid=1660676"
Community content is available under CC-BY-SA unless otherwise noted.