Personality: Brönte was always pushed by her father to be knowledgeable and polite. She’s very mature and doesn’t see immature people to be worth her time. Though saying that, she can be fun and have an immature side, yet it tends not to be shown.

History: Aidan McGregor always marvelled at stories about his grandmother, Brönte. He knew that Greek Gods ran through his family, and that his grandmother was a daughter of Hecate, and that his mother was a daughter of Eros. One story that he always loved was the one where his mother was tell him that Brönte was a Hunter of Artemis, and still remained as her 16 year old self, even to this day. Another he’d like, was Brönte’s life story.

Brönte McGregor was born to Peter McGregor and Hecate around about the 1940s, in Stalingrad, Russia. Peter was in Stalingrad during the time of the Battle of Stalingrad. The reason being, a few months before, he was split from his regiment and some Russians found him, taking him aboard their squad. They were then called in to defend the city. In 1946, Peter returned to Scotland, but later moved to Spain. In Spain, he met Hecate, posing as Marie. They then began to date, and before long, Brönte was on the scene. Hecate soon left, claiming that Brönte was a mistake. Peter was heartbroken, and decided to move to Australia. There, he had two more kids, Andy and Joel who were twin sons of Nike. In the back of his mind, he knew that he should be more protective of his 4 year old daughter, and a few month old sons, due to them being demigods, yet he brushed the thought away and never looked back. In 1952, he married Shirley Jones, daughter of a fisherman. The couple had a daughter, whom they named Bella.

Now having a stable home, Peter began to push Brönte to be the most intelligent girl at her school. He did the same to Andy and Joel, pushing Andy to be sporty, and Joel to be handier around the house when things broke. The only child, who had it easy, was Bella. Andy and Joel began resenting their sisters. Yes Peter pushed Brönte, but they were convinced he had a soft spot for her, due to being his first born, and Bella for being the only normal child. When Brönte was 12, she experienced her first monster attack. The monster was never revealed to Aidan’s mother, but she always said it was a hellhound. Brönte apparently fought the beast by hurling various objects that she had around her, in hopes of luring it away. She threw a brick at its head, confusing it, giving her a chance to escape. After this, many more attacks came, but with time, she became more experienced in how to fight the monsters. The way she battled them, was using her father's dagger, which was celestial bronze, due to Hecate changing it, as she was with him, so that she knew that their child would have some form of protection. When she was 15, Brönte was forced to have sex by lust fuelled Eros, leaving her pregnant. She gave birth to a beautiful girl who she named Charlotte. After that, she had a bitter hatred for men, and cried herself to sleep each night. Artemis saw how upset men made the girl, and she went and presented herself to her. Artemis was acting as a psychologist, who was helping Brönte through the traumatising event that was her rape. Near the end of one of their final sessions together, Artemis revealed that she was the Goddess of the Hunt, and told Brönte of her true heritage, due to Hecate revealing to her that Brönte was her daughter, and told her that she may join the hunt if she wished to. Brönte quickly joined with no hesitations. She said goodbye to her father, step-mother and siblings, and left with the goddess.

Brönte enjoyed life on the Hunt, she never looked back on her decision of leaving Australia. Sometime in the 1980s, she went back and visited her family. In her old family home, she was greeted by her step-mother, Bella and Charlotte. Each greeted her with a hug, and it was all happy, until Brönte asked where her dad and brothers were. It was then found out that her father had recently passed away, due to measles, her brother Andy died on his first monster encounter, at the age of 13, and finally, her other brother, Joel, had committed suicide, on his 16th birthday. Brönte took a few years from the hunt, to stay with her family. In that time, Shirley passed due to being mugged and murdered. That’s when Brönte decided to go back onto the hunt. She said her goodbyes to Bella and Charlotte, and resumed her journey with Artemis. Sometime in the 1990s, Brönte was split from the rest of the hunt in Sierra Leone, during the civil war. Searching for Artemis and her fellow hunters, Brönte came across a group of people looking for diamonds. She had been following the transaction that the rebel group, RUF made for arms, and knew that said diamonds used to get arms were called Blood Diamonds. Two male rebel guards saw her, and chased her into the forest nearby. Refusing to give up, despite being close to tiring out, Brönte carried on running. Eventually, the two rebels caught her, and beat her until she was completely defenceless. After hours of lying down, bleeding and in pain, Artemis found her, and immediately took her to the nearest doctor, due to Brönte's request of being treated as a normal person would, not drawing attention to herself, Due to the many people being treated, Bröntee had to wait to be recovered. Unknown to her, Artemis had given her some ambrosia, healing her faster. Before long, Brönte was back on the Hunt.

Often Brönte wonders if she regretted joining the hunt, yet she never does. She loves her daughter and grandson very much, despite only seeing them a few times. She is now a trusted member of Artemis’ hunt, and has been for years. 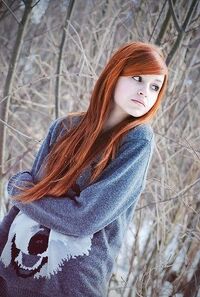 (Oh yeah, Unukabuno dared me to put this thingy at the bottom, so yeah c:)

Monsters would have come much more frequently due to there being 3 demigods all in one place. Why didn't she bring Bella and Charlotte with her in the Hunt? Artemis could have healed her or conjured up some ambrosia. With that in mind, why did she need to be checked by a mortal doctor? Take your time. I've got forever to wait -Demi ღ

Fixed the monsters thing. She couldn't have forced Bella and Charlotte to come into the Hunt, even if she wanted to. In a simplified way, they didn't want to. And hopefully, I've fixed the doctor thing.

Before she joined the Hunt, what did she use to fight of the monsters? Bricks alone won't kill them since only CB can kill monsters. Take your time. I've got forever to wait -Demi ღ

In the first attack she had, she threw bricks at the monsters head, confusing it, as being hit in the head with a brick, generally cracks your head open, and or confuses you. The other times, I've added something to.

It looks fine to me.

This claim has been approved as a Hunter or Artemis. You now need to make a page for them and a word bubble, if you aren't sure how to do this you can see the guide here. Once you have done that you can add your character's name to the cabin list located on the cabin pages and start role playing with your new character. If you have any questions feel free to ask a member of the Admin team.

Retrieved from "https://camphalfbloodroleplay.fandom.com/wiki/Claiming:Camp/Br%C3%B6nte_McGregor?oldid=1201225"
Community content is available under CC-BY-SA unless otherwise noted.