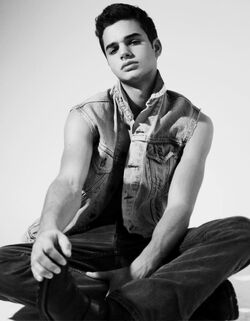 Personality: Bryson is the definition of a free spirit, he hates any of kind of rules or order. Due to how restricted and dull his childhood was, he does his best to make it up now. His only two secrets are his past and addiction to heroin, other than that he's simply an open book.

History: Miriam Miller was a devout Amish woman, she was married to her husband at 18 Jacob who was 40. They were very strict about their faith, shunning any sort of modern technology or deviation from their christian faith. They quickly had a son named Daniel and raised him, but sadly a farm accident had robbed Jacob of the ability to father any more children.

So for 18 years, they both raised Daniel as the perfect Amish boy. He obeyed their faith and rules, always did his work and never complained even once. But when Daniel was 18, he went to go out into the world to find himself. As proper Amish tradition.

But when Daniel had been gone for 2 years, Miriam and Jacob were devastated and worried for their boy. So Jacob had left the town, determined to find his son going to where he was last seen.

Hermes was in the town on business, delivering word to a number of tree nymphs in the area. He had met Miriam, along, miserable, scared and worried for her son. The god of thievery had comforted her, having pity for her.

In a moment of weakness, Miriam had allowed the god to sleep with her. Due to her weak and emotional state. Once Daniel’s dead body was found, Jacob returned to the town.

So when a few weeks later Miriam realized she was pregnant. Jacob was furious, causing a rift in their marriage. But they kept the child’s parentage a secret. When the baby was born, they named him Abram and planned to raise him to be another obedient Amish boy.

But Abram was a rebel in any sense of the world, he hated that they had no technology and hardly any fun. He would always do the best he could to cause trouble. Naturally the fact that he was a love child made Jacob and Miriam foster a secret dislike for him, but with his mischief only got worse.

From the age of 9, Abram would start sneaking off from the town. His high stamina and navigation skills made it child’s play for him to journey to the nearby city and explore. He had stolen a fair amount of money to purchase some regular clothing. He was astounded by everything the modern world had to offer.

So for a few years, he had spent his time sneaking off into the city at night to live the life he had oh so desired. But when he was 13, he was attacked by a giant scorpion. He quickly panicked, doing his best to avoid all it’s attacks. It’s as if the beast couldn’t touch him, obviously he couldn’t have kept this up forever.

A 30 year old son of Hephaestus had saw the attack and quickly slayed the beast with a Celestial Bronze axe. But young Abram had already had away without knowing what had happened. Later that night, he looked upon a wild party.

He quickly joined the festivities, he dazzled people with his impressive dance skills. When some girls asked for his name, he knew Abram was rather lame. He had told them his name was Bryson, having heard the name somewhere during one of adventures through the city.

So he lived 2 lives, one where he was boring Abram. Had to live amongst boring and religious farm people, but at night he was Bryson. Party boy who became quickly swept up into a life of sex, alcohol and drugs.

But when he was 14, he was attacked by a Scythian Dracanae while he was at home. Fortunately for him the son of Hephaestus, Felix had saved him. He had been keeping an eye out for monsters and such because he had wanted to find the untrained demigod he knew was somewhere in the area, he even asked a satyr to track him down. But due to Felix’s kindness and responsibility, he decided to handle the son of theft.

Felix quickly slayed the beast, he went to Miriam and Jacob to explain to them and Bryson that he was a demigod. They didn’t believe a word, only believing in their true god. Bryson had had it, he was tired of living with them and saw this new life as a demigod as an escape.

He told them he hated them and being even being in the same room with the parents who never truly cared for him like they should’ve. He was dismissed as an ungrateful godless heaven and was quickly disowned him.

Bryson couldn’t be happier, Felix had offered to take him to camp and gracefully accepted. Bryson officially changed his name from “Abram Miller to Bryson West.” The name Bryson just wasn’t a persona for him, it was a new identity. Free from the shackles of an Amish life he hated since day 1.

Upon arrival to camp, he was quickly claimed by Hermes and joined the cabin. He was happy, able to find a good balance between boring farm life and dangerous party life. But after a few months, his old habits had crept up on him. He was soon staying out until the morning constantly and developed a very bad heroin addiction.

So after spending a year at camp, he had departed at 15. Not thinking he needed to stay there anymore. For three years, his problems only got worse. He used his powers to steal money and persuade people to give him their valuables and merchandise, money he needed to stay alive and feed his drug addiction.

He didn’t see it as a problem, the idea of going to any sort of recap terrified him. Being “locked up” like he was a child wasn’t an option to him. A while after he turned 18, Bryson sat down one day and decided he needed ‘’’some’’’ stability in his life. Returning to camp seemed like a good start...

For those who were wondering why this was claimed so fast, Hydro already showed this to me earlier.

Retrieved from "https://camphalfbloodroleplay.fandom.com/wiki/Claiming:Camp/Bryson_West?oldid=1389249"
Community content is available under CC-BY-SA unless otherwise noted.