Personality: His personality is a bit complicated because he has mild Borderline personality disorder. He has unstable self-image of himself, mild suicidal behavior, unstable control of anger, unstable mood and impulsivity. When he has stupors, he can be dangerous. He has the temper but tries to control it. He always questions himself mostly with negative questions, which doesn't help his current situation. Even mild shots of sedatives don't work. If he overdoses, he'll be on great risk. As sedatives don't work, he is left alone until he calms down. But this is another problem as his disorder includes frantic efforts to avoid abandonment. He can be a real pain but he's smart and somehow fun to be with, if you're able to be friends with him. Deep inside, he still hopes for a brighter future in which he'll be happy, broken free from the problems he is facing. 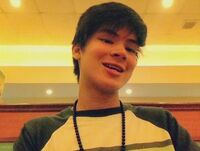 History: In the Chinatown of Manila, called Ongpin, lived a simple man named Bernardino Ongsee. He is of Chinese descent from his father. He owns a small herbal medicine pharmacy a few walks from the famous Binondo Church. Although his herbal medicine didn't sell much, he still has sidelines like helping out in a Chinese eatery there. On that place he met a beautiful woman: (god) in the guise of a pretty Filipina. She said she lost her wallet and that she was very hungry. Bernardino happily treated her for some Chinese cuisine. On that day their friendship started. (god) introduced herself as Carina, a simple person who lived at Tondo, Manila. After a few weeks their feelings became intimate and eventually became a couple. But Bernardino's parents told that their wedding will have to wait for some time. During this time, they had an affair. Once his parents knew Carina was pregnant, they have no choice but for the couple to live separately from them. After some months Carina gave birth to a handsome child which they named Caesey. Shortly after his birth, Carina left them, leaving Bernardino heartbroken and had no choice but to go back to his parents. He was raised well and cared a lot. He studied at a private school in Manila. There, he was flocked by girls and was a general crush. Bernardino, seeing that living in the Philippines is hard for him and Caesey was hard, he decided to leave for the United States and live there with his brother and Caesey's uncle, Saturino. They left the day after Caesey's thirteenth birthday and arrived at New York hours later. He thought that he will have a better life in the States but unbeknownst to him, his life will change for the worse. At first, he thought that Saturino was a very kind uncle but as weeks passed, he showed his true colors. He was gay. Yeah, gay. There are times when he would touch him, which Caesey avoided. There are also times he would invite him to watch X-rated gay films, but Caesey refused also. Then there are times he beats him up, locks him in his room while Bernardino is away for work. He does everything to make Caesey's life painful and miserable. Things got worse, and Saturino moved from touching to actual rape. He beat Caesey up first with his fists, then a hard stick then banged his head on the wall. From there he did the crime. Caesey's hands were tied up to prevent him from escaping. Caesey resisted and tried to kick his head. But his uncle won't relent his advances. Caesey screamed for help, but no one heard his cries. Saturino eventually did it. Caesey was left there, crying from pain and trauma. Bernardino came home, and saw what happened to him. He was angry at his brother for doing such a thing so he called the police and he was brought to jail. Caesey was brought to the social worker for debriefing and counseling. Bernardino was told that he should be left there to be monitored. For the next days, his condition didn't get any better. Afterwards he was brought to the psychiatrist and was diagnosed with Borderline personality disorder. News came to his father, and he was greatly saddened. He had no choice but to surrender him there. He was alone most of the time but sometimes he goes into tantrums. He was the least liked because of his temper and avoided by the other children. Even though he has the disorder, he can still think clearly. He planned to escape, even though he doesn't know the way home. He packed his things on a small bag and ran away. Unfortunately, he got beat up again by some gangsters and left injured at the streets. He regained consciousness and continued to run away. He hoped that he will find his dad. He didn't know where he was, but he stumbled upon Long Island Sound. After resting, he heard the sound of gnashing teeth and growling. That's when he saw a hellhound with its piercing eyes at him. He was scared and ran for the forest to hide. But the hellhound chased after him. He ran and ran, deeper into the forest. Then he saw lit torches and an arch with the words "Camp Half-Blood" on it. He thought it was a campsite and ran straight for it. There he bumped into a satyr, who was startled to see him. There he was asked. Then the satyr realized he was a demigod so he gave him a tour around camp. He was claimed by (god), his mother, afterwards.

"My heart just couldn't keep up with the gigantic gap between dreams and reality." - Jellal

This claim has been approved as a child of Mnemosyne. You now need to make a page for them and a word bubble, if you aren't sure how to do this you can see the guide here. Once you have done that you can add your character's name to the cabin list located on the cabin pages and start role playing with your new character. If you have any questions feel free to ask a member of the Admin team.

Retrieved from "https://camphalfbloodroleplay.fandom.com/wiki/Claiming:Camp/Caesey_Ongsee?oldid=1792620"
Community content is available under CC-BY-SA unless otherwise noted.