Species: Erotios (by Aries and Sadie)

Personality: Calix is always full of energy and can be wild and crazy sometimes without knowing it. He has an odd obsession for Coca-Cola which explains some of his energy and causes him to talk before thinking. He can sometimes be nice and flirty but, at other times he's selfish, rash and inpatient. He loves being care-free and having freedom to do what he pleases. His personality is a mix of Aries' and Sadie's. 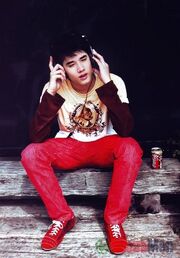 History: Aries and Sadie confessed their love in the forest after hanging out for a while. Aries invited Sadie to come over to his room to have a slumber party. Of course, a slumber party means sleeping together, they slept together in Aries' bed, filled with love. Sadie moved closer to him for warmth that night. The next day, they woke up and heard the sound of cans near the bedroom door. They came to check it out and found a rather tall boy drinking Coke and a pile of Coke cans at the corner. They asked who he is and he introduced himself as Calix, the spawn of their love. They were very happy to see him. From then on, Calix lived with his creators, who treated him like a child and best friend at the same time.

Weapons: His powers as an Erotios. No physical weapons at the moment.

This claim has been approved as an erotios. You now need to make a page for them and a word bubble, if you aren't sure how to do this you can see the guide here. Once you have done that you can add your character's name to the cabin list located on the cabin pages and start role playing with your new character. If you have any questions feel free to ask a member of the Admin team.

Retrieved from "https://camphalfbloodroleplay.fandom.com/wiki/Claiming:Camp/Calix?oldid=1829874"
Community content is available under CC-BY-SA unless otherwise noted.