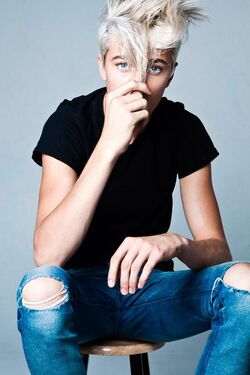 Appearance: Calvin is at an average height of 6"7' and weighs 61kg. He has a well-built body but seems to be skinny. His shoulders and back are broad, his eye color is light blue and he has thick brown eyebrows. He has long, dirty white and messy hair which happens every time he wakes up. He sports a simple shirt and shorts every time and is too lazy to add more decorations on his body. His eyes are somewhat glaring but that is actually his poker face or his expression whenever he isn't interested or is bored.

Personality: Calvin is a lazy being and a proud couch potato. He seldom gets interested in something and easily gets bored. He was always scolded back in his school days because of sleeping in class and not paying attention. He's always absorbed in his own world whenever he feels like it. But, aside from his negative attitude, when something excites him, he easily gets attached to it and enjoys it but doesn't show it the reason why people thought that he isn't interested in anything at all. He only shows this part of him to people that he trusts.

History: 17 years ago, it was Jade's first day on college. She was actually nervous but it simply changed into excitement when she met Jason (she doesn't know that he is Hypnos), a transferee that she got along with. Days passed and Jade got annoyed of Jason's personality of being completely lazy and not being interested in anything at all. She was his first male friend as she stepped into college but it seems that he isn't that surprised to have a friend. Months already passed and they grew closer and Jade just realized that she has feeling for her friend, Jason. One night, while they were working on their project (Jade and Jason are in a diad for the project), Jade decided that she will confess her feelings for him that night. They finished the project early and it turned out that Jason also has feeling for Jade. That night, he took advantage of her and regret nothing.

The following day, Jade woke up and just realize the thing that they just did. She quickly got up, dressed herself and went out to find Jason but failed. It just strucked her head about what Jason did: they had sex and just left her, alone. She regretted what they had did and left school to escape the embarrassment to herself. She traveled back to her hometown in New York with her parents and months after it, she started showing symptoms of pregnancy. Jade was on her night shift on a certain local restaurant when it was her time to give birth. It was her crew mate, Timothy (who's a son of Apollo), who helped her. After that, Jade and Timothy grew closer and he stood up as a father to Calvin. Timothy already sensed that Calvin was a demigod and that he would take proper care and responsibility of him. Calvin was 7 years old when he was diagnosed of ADHD and dyslexia after showing symptoms of it earlier. Timothy always tells story to Calvin mostly about Greek gods and he simply showed interest in it. On his primary schooling, Calvin didn't make any friends because of his different interest about Greek mythology that he knew about. That's why in other topics, he seems bored and uninterested and ends up sleeping.

Calvin was around 11 years old when he encountered a monster. He was on his way home from school because Timothy would always be the one to fetch him but he seems to be late that day. He was silently walking when something starts to chase him. When Timothy finally arrived at the school, he just saw a harpy chasing Calvin. He also chased after it and told Calvin to run faster and killed the harpy after. Knowing what happen, Timothy decided to train Calvin for his future. From then on, Calvin already knew about CHB and everything that he needs to know which Timothy explained. Timothy gave him his weapon (the dagger that changes into a CB sword) as a gift and trained Calvin every time he went home from school or whenever Calvin's mother is on her shift. They spent 5 years (Calvin is already 16 years old) of secret training which includes swordplay and self-defense with the help of Timothy. They encountered several minor monsters while he is undergoing training but with the help and guide of Timothy, they were able to get past it. Through the years, Calvin was committed on what he's doing because he got excited of it and wants to go to CHB already. And because of that, Timothy explained everything to Jade and was surprised but simply agreed on it. She wants her son to be happy and free that's why she agreed on Timothy's proposal that it was time to bring Calvin to CHB. On their way to CHB, they spotted a hellhound the time they stepped into the forest. Timothy believed in Calvin's potential and let Calvin deal with it. As the hellhound charged at Calvin, he stepped back and leaped on it and ended up on the hellhound's neck. He slashed its neck until it disintegrated and that results to victory. After that, Calvin and Timothy bid their farewells and thank yous before Calvin enters camp. And on that day, he got claimed as a son of Hypnos.

Weapons: A dagger that transforms into a CB sword.

Hey there ill be your claim checker for today and there is only one thing i see wrong about this claim. well not wrong per say but something you should add.

1) were there any moster attacks between the ages 11-16? You dont have to explain all them in detail maybe something along the lines of "Through the years as Clavis grew he was occasionally attack by monster but with the help of timothy and his training he was able to get by." Idk or you could come up with something else

There? Any more errors or anything I should add, Mian? :--)

This claim has been approved as a son of Hypnos. You now need to make a page for them and a word bubble, if you aren't sure how to do this you can see the guide here. Once you have done that you can add your character's name to the cabin list located on the cabin pages and start role playing with your new character. If you have any questions feel free to ask a member of the Admin team.

Retrieved from "https://camphalfbloodroleplay.fandom.com/wiki/Claiming:Camp/Calvin_Hood?oldid=1540191"
Community content is available under CC-BY-SA unless otherwise noted.