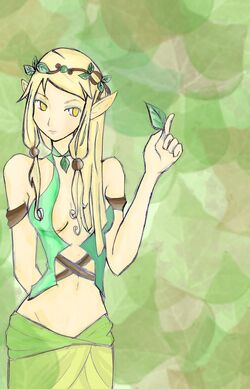 Personality: she is very shy but bubbly. camellia is not afraid to be the leader when she needs to be. she is friendly to everybody.

Camellia was created by Persephone in the underworld to guard her garden (which is her life force; note: Persephone planted a bunch of camellia's in the garden). She was supposed to be a secret because Hades never lets Persephone's "guests" stay in the underworld but Camellia was eventually caught by a harpy who worked for Hades. The harpy dragged Camellia to Hades and Hades planned on killing the garden so Camellia could die. But Persephone pleaded him to spare her. Hades considered her plea and sent her to camp. She resides in Persephone's cabin with the permission of the counselor. Persephone also moved her camellias to camp and they are near the strawberry fields.

Note: this is my first time creating a nymph so if you have any questions, please comment! :3

So, she's a flower (camelia) nymph, right? Also, her flower must not be far away from her. If she came to Lotus casino, the flower should come as well.There is a crime, but no criminal. ★❣Broken❣★

so can i say that persephone moved the garden to camp?

Yes, but how about being a bartender? Also, why did Hades send her to Lotus Casino out of all places? Why not camp? Why would Persephone call a demigod to retrieve her only after some time?There is a crime, but no criminal. ★❣Broken❣★

Oh, Persephone moved her whole garden to camp? o.o I think just Camellia's flower would be ok :) Also, why did Hades find it necessary to wipe her memories?There is a crime, but no criminal. ★❣Broken❣★

This claim has been approved as a flower (camelia) nymph. You now need to make a page for them and a word bubble, if you aren't sure how to do this you can see the guide here. Once you have done that you can add your character's name to the cabin list located on the cabin pages and start role playing with your new character. If you have any questions feel free to ask a member of the Admin team.

Retrieved from "https://camphalfbloodroleplay.fandom.com/wiki/Claiming:Camp/Camellia?oldid=1200928"
Community content is available under CC-BY-SA unless otherwise noted.