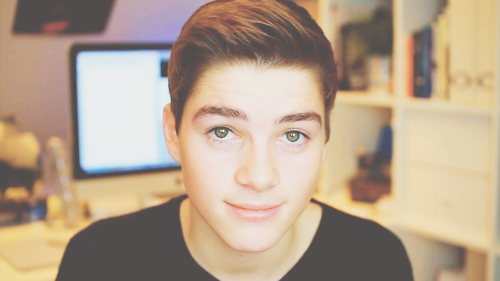 At the age of 19, Charles was as rebellious as any teen could get. Nightly, he'd come home with almost a different girl each night. Being a child of a divorce and having a father who was permanently drunk, he was used to getting away with most. When he was 17 and came back to the custody of his mother, her strict rules had no effect on him whatsoever. After two years and being desperate for a change in her son's behaviour, Megan sent Charles to live with her sister in Germany for a year in hopes of changing him.

In Weimar, Charles continued being his rebellious self for a week before knuckling down and changing. For a few months it'd seem he had changed, but one night, as a treat from his aunt, he went out clubbing and ended up bringing a single woman home. The woman herself was Eris and the two had a one night stand. Hearing this, Megan arranged for Charles to stay for another year to really enforce what she expected of him. Of course, nine months later Eris showed up with a baby boy for Charles. Being left a single parent with his aunt only helping when he begged her, he quickly got a grip on how he was meant to behave. By the end of the extra year, Charles was a changed man.

Back in England, Charles settled into the city of Sheffield where he raised Carter for a year, staying off of his old life, accepting a new one. However, when Carter had just turned one years old, Charles ran into Eris again, and she seduced him into having another one night stand with her. This resulted in the birth of Hadley, Charles' second child. For about 5 years, Charles managed to stick to the lifestyle he had attained in Weimar, but after a night of being influenced by the wrong people, he slipped back into not caring, resulting in him losing Carter and Hadley.

In the Foster Home, six year-old Carter and four year-old Hadley refused to be split up, always spending time together. Whenever a potential foster family visited, the two would always be seen together. After countless visits of foster families and nobody seeming to want to foster them, the two moved more and more into the background. At the age of 10, Carter and Hadley were split up when Hadley was picked by a foster family and Carter wasn't. For roughly a year or so, the two had no contact until the family dropped Hadley back off at the home, claiming she had been too disruptive. United again, the two promised each other that they'd never be split up again.

When Carter was 13, his first monster attack occurred. It just so happened as he was at a friend's party. The monster itself was a fire-breathing horse. As it spotted Carter, it broke out into a charge, aiming straight for Carter's midsection. Frightened by the outburst of the horse, Carter grabbed a nearby hammer - which so happened to be celestial bronze, as the owner was a son of Hephaestus - and as the horse nearly touched him, he brought the hammer on its skull, causing it to disintegrate into a golden dust. Returning to the Home, Carter refused to speak to anyone, even Hadley, scared that they'd find out and judge him. It wasn't until a few months after the attack did he finally confide in Hadley, telling her everything. Due to Hadley being slightly younger, she believed most of it and promised not to tell.

When Carter was 16 and Hadley was 14, Megan managed to get custody over them, and so, they went and lived with her. By this time, Hadley had also had her first attack and confided in Carter. With both of them being mysteriously attacked by strange beasts, they wanted an answer. Eris, having told Charles about her world and finding out he never left a note for them, went down and spoke to Megan, telling her about the Greek world. She made sure Megan promised to not tell the two where she had learnt of this information and not even who their godly mother was. Having told Carter and Hadley, Megan made sure they were on watch basis by an old friend of hers. The friend himself was a storm spirit and promised to keep the teens safe due to knowing how much having the two meant to Megan.

The next two years passed surprisingly easy for the two siblings. The odd small monster attacks happen but due to the spirit protecting them, they rarely got harmed. Carter had, however, experienced his second monster attack, but unlike his first, he had some control over it due to the on and off training he received from the family friend. After Megan fell ill with cancer, she finally gave in - having previously saying no to the idea of Carter and Hadley leaving her - and allowed the storm spirit took Carter and Hadley to Camp, where they were claimed by Eris.

Since I'm brain dead for writing the whole thing out, here's a gist of his personality: He's cheeky, mainly nice unless you insult something close to him (standard stuff really). He also doesn't give two for what anyone thinks. He does have mood swings quite often due to his past.

Okay so... you've mentioned that when Carter was 13 y o, he was attacked by a fire-breathing horse. Then the next attack you said was when he was 16. 3 years without another attack? I doubt that, especially there's two of them and together their scent would attract more monsters, as far as I could remember.

The hammer thing is kinda out of place. I mean, where exactly did he get the hammer?

And then you also said after that "2 years passed" so I'm assuming he's now 18, am I right?

Added in the monster attack, the hammer thing happened because the horse attacked him as he was going past a farm house, who was owned by the son of Heph who had the hammer. And yeah, he's 18 now.

This claim has been approved as a child of Eris. You now need to make a page for them and a word bubble, if you aren't sure how to do this you can see the guide here. Once you have done that you can add your character's name to the cabin list located on the cabin pages and start role playing with your new character. If you have any questions feel free to ask a member of the Admin team.

Retrieved from "https://camphalfbloodroleplay.fandom.com/wiki/Claiming:Camp/Carter_Cambridge?oldid=1201319"
Community content is available under CC-BY-SA unless otherwise noted.