Personality: Cece has a fun personality. She is giggly, and energectic and eccentric. However, while being on Earth for 2151 years, she has grown tired of things, and, nothing truly excites or surprises her anymore, though she acts like it. She loves the thrill of excitement, and, she is a naturally hard worker, and, will give the task she has at hand all she's got. 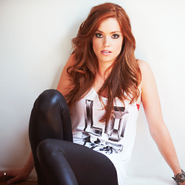 Cecelia Casca was born into a family of mortals. Where they lived at the time, where present day Republic of Macedonia is, was being controlled by the Roman Empire, as it was around 138 BC. Cecelia was born on, approximately, April 5, and, her family could already tell she was special. Just how special their mere mortal minds could not comprehend, because Cecelia, although mortal, was able to see through the mist.

Cecelia was never an ordinary child. She was always so eccentric to do any, and every, thing she could, and, that's what made her special to her parents. She was a beautiful child, and, a naturally hard worker. She was always focused on one thing, and, everyone just seemed to appreciate her company. She always preferred hanging around adults, though. The other children began to whisper about her, and, she began to get bullied by the other kids, for not being normal.

One day, after Cecelia had turned 13, she was walking along, away from her home, kicking a stone. She had been excluded from the games the other kids played, again. She was confused as to why it hurt, after it's been done time and time again but, before she could come up with an answer, she kicked the stone into a bush, and, it seemed to hit something. Out of the bush pounced a large dog, roughly the size of a small dumpster. It, mad that it was hit with a stone, went to pounce on her. However, before it could touch her, however, it was shot with a silvery arrow, and turned to dust. As she looked at the place the arrow was shot from, she saw a group of young woman. She was approached by the girl who seemed to be the leader and was told that they were the Hunters of Artemis, and she was Artemis. She explained about the Greek Gods were real, and, that Cecelia seemed to be a very special mortal who could see things for what they were. However, Artemis also explained that it was very unlikely that there were many more mortals who could see through the mist, and, if she told, no one would believe her. It was then that Artemis and her hunters took their leave.

Every day after that, she thought about Artemis and the Hunters. She considered telling her parents a few times but, Artemis' warning that no one would believe her, so, she ended up remaining quiet. She was very intrigued by the Hunters and Artemis. So, one day, roughly 3 years later, she was brought back to that same spot that she originally met the Hunters, and, couldn't help it but, smile at the fond memory. So, she sat down at a fallen stump. However, before she could do anymore thinking, a man burst through the trees around her, and, she gasped. The man was far larger than any man she had seen before, even the Roman Soldiers. Also, the man only had one eye. She stumbled back off the log, gaping at the one-eyed beast as she hit the ground and began to crawl backwards. However, it became clear that it wasn't after her. In fact, it hadn't seemed to notice her at all. As Cecelia looked closer, she realized it had gotten something in its eye and, was now partially blind, and, on a rampage. As it began to stomp, it moved closer to her, and, was soon about to step right on Cecelia. However, before it could put it's foot down, literally, it was stricken through the chest with a familiar silvery arrow, and, turned to dust. As Cecelia looked up, her skin now coated with monster dust, she saw the Hunters and Artemis, once again. Artemis bothered to explain that they were after the partially blind cyclops before it could cause a real disturbance, and, that it was unusual to meet a clear-sighted mortal for a second time. Artemis, for a second time, reminded her that no one would believe her story, and, that they will most likely not meet again. Artemis and her Hunters took their leave for a second time.

Cecelia kept the secret of the Greek Gods to herself for the next few years, again. She held back all of her curiosity and excitement, in an attempt to conceal that part of her life, believing Artemis would never show herself again. However, by her 16th birthday, Cecelia couldn't keep it in. Now, Cecelia couldn't take it. She had seen Artemis twice now, and, she couldn't hold her excitement and curiosity in any longer. As her parents and her were walking along one evening in the summer, she told them what she knew. They laughed at her, at first, believing that she was kidding. When they saw the look on her face, they scolded her for telling such lies. Her face burned with tears of embarrassment and anger. Artemis was right. They didn't believe her, and, she did the only thing that came to her mind as her parents stood there, scolding her. She ran. She, subconsciously, went to the spot she first saw the Goddess and her followers. She sat on the ground, sobbing tears of embarresment as she thought of the looks on her parents faces when she told them of the Gods and Goddesses. However, her attention was turned as she heard a branch snap in the distance. She stood, and went to check it out. She saw that it was a huntress fending off a bigger black dog than the one she had seen before, all by herself. Fearing the Hunter was in trouble, she picked up a stone and threw it at the dog. It's attention wavered and focused on Cecelia, and, went to pounce on her. Cecelia began to ran but, tripped. She knew at any moment that the dog would devour her, probably whole. However, as she looked up at the setting sun, and at the hound that was coming her way. However, at the last second, it was stabbed, and turned into dust, by none other than Artemis.

Artemis congratulated her for her bravery in throwing the stone. The hunter that was fending off the hound admitted that she might not have made it if the hound's attention hadn't been diverted. Cecelia, knowing that she couldn't go back to her parents, not after them thinking that everything, the Greek Gods, was a lie that Cece had merely heard before. She also knew that she owed Artemis not one, but, 3 life debts to repay, so, she opted to pledge herself to Artemis, who happily excepted her into the Hunt.

For the next 2000 + years, she traveled around with her savior, Artemis, and the other Hunters. A few times, she would catch the eye of a man but, she ultimately turned down each and every advance, remembering her pledge to her savior, and, knowing that she could never displease her Goddess. She, however, eventually grew wary of all the monsters and the fighting, wishing for some excitement, some change. Artemis, knowing her huntress, informed her of Camp, and, how a few of her hunters were there, and, offered to take Cecelia there. She hesitantly accepted, not wanting to leave her but, knowing her Goddess knows best for her. So, that night, she was dropped off at Camp.

Stuff: All the stuffs that come with being a Hunter of Artemis.

This claim has been approved as huntress of Artemis. You now need to make a page for them and a word bubble, if you aren't sure how to do this you can see the guide here. Once you have done that you can add your character's name to the cabin list located on the cabin pages and start role playing with your new character. If you have any questions feel free to ask a member of the Admin team.

Retrieved from "https://camphalfbloodroleplay.fandom.com/wiki/Claiming:Camp/Cecelia_Casca?oldid=1202605"
Community content is available under CC-BY-SA unless otherwise noted.