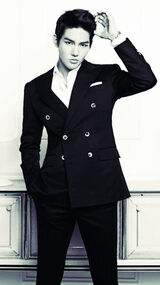 Personality:Cedric is mean spirited, a bit of a bully, and enjoys picking on people weaker than himself. He is quite narcissistic, very into his looks, and always tries to maintain good form. Despite all the negativity, he actually makes a good friend, who will listen to you and give you an honest opinion. He is somewhere between a tsundere and a himdere when it comes to love.

History: Leonora Kang was once a comatose patient, after getting in a car accident involving mosquitoes. Everyday, it seemed unsure if she would finally wake up, as she was not brain dead. Everyday, everyone was let down,except one person; Morpheus. During her 2 months comatose, he had one day noticed her, in her dreams. In each dream, he tried to get close to her, manipulating the dream so that she would believe he were her boyfriend, or something close to it. Honestly, Cedric should’ve been a child of morpheus. In fact, there is no doubt he would’ve, if it hadn't been for Hades.

See, Leonora had attracted two potential suitors in her deep comatic slumber. Hades watched her from afar, but couldn’t get close to her unless she died and went to his land, or woke up and left Morpheus. In his desperation to have her, Hades did the unthinkable; he raped her. By chance, she woke up the next day, feeling violated. No one knew what had happened, and so they said it never happened. Except, of course it had happened. A month later she learned she was pregnant. Having known no other man, she assumed it must have been the stranger in her dreams.

Morpheus tried to visit her in the mortal world; he tried to continue the spark they had. Leonora wouldn’t have it. She rejected him and threatened to report him for rape. Morpheus tried to explain it but in she wouldn’t have it. He grew angry and upset at her, and Hades. He hated the spawn of Hades growing in her, the reason he was cockblocked. In his anger, he made a vow to Leonora, that one day, he would show the child pain. He’d know what to do the day came. Naturally, she thought he was a loon rapist so she paid no heed. Because Morpheus wanted to hurt Cedric amorously, and he couldn't think of an adequate curse at the time, he waited.

On June 21 1997, Cedric was born. Leonora used to live in the outskirts of Las Vegas, but after what happened, she wanted to escape anything to do with that life, and thus moved inside the city, where she found a stable job at a pawn shop and cut all ties to her family and friends. The pregnancy, the rape, it had all affected her psychologically. How sickening it must be to realize that while unaware, someone took advantage of her body.

Cedric grew up barely with supervision. His mother wasn’t very involved in his life, for obvious reasons. To compensate for this lack of attention, Cedric tried to get people’s attention, and became very self involved, to the point of being narcissistic. Other kids were either scared of him or simply didn’t like him. He was what you might consider popular, as well as a bully.

Hades was not a completely terrible god, even though let’s be real he was. He was nice enough to send Cedric a gift for his 13th birthday, although Cedric didn’t know the undershirt he got in the mail was a stygian iron sword, that also doubled as light chainmail when he wore it. He discovered what he really had when one day, when he was out playing some basketball, and a hellhound attacked. Because he had his undershirt on, the scratch didn’t affect him, although it hurt like crap and he felt bruised. He crawled away quickly from the dog, in the process trying to rip off his upper and under shirt to see the damage. When the undershirt ripped (which, it rips easily when the owner of the shirt tries to rip it off forcefully) it turned into a stygian iron sword, to Cedric’s utter astonishment. As the monster tried to come back at him, he killed it.

He would tell his mom, but she wouldn’t care. She wouldn’t listen to him, and if she did, she would only pretend. He felt frustrated, but knew part of her depression was his fault. She never told him about his dad, or his birth, but he knew. Why else wouldn’t she love him if he wasn’t the reason?

From there on, he always wore his undershirt, and only light things on top that he could pull off easily. When monsters came around, he would just rip off his undershirt and slay them. (THIS LINE THO)

When he was 15, he got in a toxic relationship with a girl. It started via physical means and continued as a very physical relationship. It burned bright, but died quick,and left Cedric to feel the toxicity. He became a little crueler, a little angrier. Any other relationships he got in carried the same trait as his first. It was honestly a shame his first relationship was that way, because he never understood what a caring and compassionate relationship was. So when deep feelings like that later came, it was like he was hit by a truck.

16, and Morpheus came calling. He’d found the perfect way to inflict the pain he’d promised on the son of Hades. He found a boy, a boy who dreamed for the perfect guy. The boy just wanted someone to love him, someone to save him. Morpheus delivered it with a curse. He visited the boy, Connor, and visited Cedric. He cursed the two to forever see each other in dreams, forever be plagued by each other’s subconscious problems, and to fall in love. The twist? They could never meet each other in reality. Only when one of the two were to be mortally wounded, could they finally see each other, before one of them died. It was fitting really, like he was putting his own suffering with Leonora, giving it steroids, then passing it on to Cedric. Honestly, Morpheus basically pulled one of the best cockblocks ever.

Cedric was freaked out at first. Who was the boy? Sometimes, they’d be in dreams he recognized as his own; other times, he would find him in a dream that held no purpose for him. At first, they simply accompanied each other in the weird dream world. When he woke up, he couldn’t remember much except Connor.

They started talking, eventually. Cedric figured he was an imaginary person he’d made up, to cope with his guilt for his mother, his stress with school, and his bewilderment with monsters. He didn’t know it then, but he was falling in love. He especially didn’t know it because he thought Connor was kind of lame, and a little weak, despite being cute. He’d mess with him, tease him, but that was just small signs of what was really going on. Morpheus watched on, with the sadistic pleasure of knowing how crushed Cedric will be once he figures out he loves Connor, his “imaginary” friend.

When Cedric was 18, a satyr found two demigods, who went to the same school. One was him, and the other, surprisingly, was Connor. the satyr called up one of his satyr buddies, and left him to take Connor. He approached Cedric instead, offering an opportunity to learn about his parentage, understand the monsters of his life, and get away from Vegas. The one thing he didn’t offer was an explanation on the dreams, or Connor. Cedric figured, if monsters and gods could be real, then couldn’t Connor be real? Because the satyr hadn’t mentioned it, however, it left him in doubt. He did however, once overhear him mention Connor, on their plane flight to Camp. He was shocked. could it be the same person?

His mother let him go. He thought it wouldn’t affect her, until he learned of her suicide, when he got to camp.

Weapon:okay here is the explanation you probs wanted claim checker

You know the drill so let me just go right to the chase (I made a funny...)

thats all I have to ask have fun fixing it

Stranger? Oh dear I'm offended (not :P) still are you trying to tell me something bucko? still how long was the mom in the comatose state.... like seriously how long cause you do know it can go on for years right >.<

Am I a buck tho? I could be 5 bucks and you'd never know. Telling you somethin? Nahhh, no idea what you are talking about, totally didn't make any reference to real life deadly creatures or anything

anywho, i stated in sentence three that she was in a coma for two months

This looks ready to claim, and I'll be happy to do so if/when you want me to. However, why would Cedric recieve a CB sword that also transforms into an undershirt? I imagine mist form objects only really exist to turn into normal items to fool mortals. Plus, it seems a little illogical. Wouldn't Hades want him to be (somewhat) protected and have a weapon? The way I'd personally do it is by having him recieve a T-shirt that turns into mail, and a bracelet or w/e that turns into a sword. As long as it was similar to normal armour, don't think it'd be OP. If I'm being fussy, do feel to ignore this, but it's my suggestion :-)

Why would he? I mean gods can be really weird sometimes. I'm mostly thinking Hades probably has a fetish for young children (Persephone amirite) and i wouldn't be surprised if he just wanted to see Cedric rip off his shirt. Then it would have to be a bit of demigod kevlar because, well, gotta protect that beautiful chest. Honestly, Hades is a bit of a perv besides being a rapist

As we all had agreed in the 2.0 forum that weapons are no longer an issue on claims I'll be accepting this claim now as we do regard weapon and armor as the same. If anyone think I'm wrong do message me on my talk page

This claim has been approved as A child of hades. You now need to make a page for them and a word bubble, if you aren't sure how to do this you can see the guide here. Once you have done that you can add your character's name to the cabin list located on the cabin pages and start role playing with your new character. If you have any questions feel free to ask a member of the Admin team.

Retrieved from "https://camphalfbloodroleplay.fandom.com/wiki/Claiming:Camp/Cedric_Kang?oldid=1786240"
Community content is available under CC-BY-SA unless otherwise noted.