Personality: Chantal is a competitive person when it comes to getting things that she wants so she's sometime's called a brat. She also comes off as cold when people first meet her, but she's actually a really nice, warm, and caring person. She hates it when her friends are messed with and will try to find a way to get revenge on the person who picked on her friends. She also gets flustered whenever people hear her sing even though she's sung on stage live before and whenever people protect her since she has always been protected in her whole entire life.

Weapons: Bow and quiver that produces unlimited amount of arrows that changes into a music note hair clip 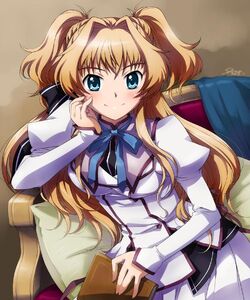 Cheri Floyd, a daughter of Eros, has always been single in her whole entire life (which is weird for a daughter of Eros cause you'd think that she'd have a boyfriend once in her life) and doesn't like the fact that she hasn't actually gone out with somebody. So she frequently went to a bar that was nearby her house and drank. One day, she met a lovely man named Damien. They had a lot in common and started going out. After a few months being together, they then had sex. The next day, Damien left Cheri and she instantly got depressed. The day Cheri gave birth to Chantal, she died since starved herself at certain days and got really sick the day before she gave birth. Chantal was then raised in a foster home.

Being a daughter of Apollo, Chantal loved to sing and her favorite sport was archery because she can perform it very well. Chantal also loved to sing but had stage fright and she usually sings when she's alone and nobody's watching her. In her childhood life, she'd take archery classes on her spare time and ran away a couple of times from the foster home, but they always managed to catch her so she stopped running away when she was 10. (tried to run away when she was 8-9) Chantal went only to public schools throughout her whole life.

At age 12, things were getting big for her. She finally got adopted by a man named Logan Jones (son of Zeus) but didn't take on his last name because she didn't feel like she should and also felt that she was betraying her mother (in a way). One day, when Chantal was in her room singing, Logan heard her and immediately asked her if she wanted to be a singer when she grew up. Chantal told him that she'd love to be but she has stage fright and it wouldn't do her any good. Logan then called his friend Alexandra Hale (a daughter of Apollo as well) who was a talent agent and was currently scoping out for the best singers. When Logan explained that his daughter is a good singer, Alexandra got very interested and asked him if she could hear her sing one day. Chantal agreed that Alexandra could hear her sing. When the day came and she sung for Alexandra (she had to take all of her courage to sing to her and messed up a bit during her song), Alexandra was impressed at her voice and then immediately asked her if she can be her talent agent. Chantal agreed but told her about her stage fright and Alexandra said they'll work on that. Since that day, Chantal has been working her butt off to become a well known singer.

At age 13, she had her very first monster attack. She was walking to the talent agency building she regularly goes to and a harpy attacked her. Logan dropped her home so he didn't notice this at all (since he was in a car and he already sped off). Chantal freaked and she didn't know what to do. Luckily, Alexandra saw the harpy attack her through her window and ran as quickly as she could to Chantal. Alexandra fended Chantal from the monster attack and quickly disintegrated it. Chantal then immediately asked what was going on. They went inside Alexandra's office and she told her what she think Chantal might be. Chantal didn't like the fact that she's part god of some sort and didn't want to believe it. But Alexandra told her she has to believe it whether she likes it or not since there is proof that she is a demigod. Not knowing which god is her parent, Chantal asked her father if she knew which god was her dad. Logan had no clue since the mortal hospitals don't exactly carry those kind of documents. But from what Chantal likes, Logan assumed that Chantal's father might be Apollo. Alexandra suggested that there was a chance her father could be Apollo, she should train her from time to time. Logan agreed and made Chantal train with Alexandra on the weekends.

At age 14, she made her first debut as a singer and got fully recognized by many people. She was loved by all and did very well in live performances. She also had another monster attack at this age and this was in her dressing room in a live performance. Even though it was heavily guarded by many others, the Empousai was disguised as a security guard and was roaming around the area since it sniffed out a demigod scent. Chantal was in her dressing room unattended and the demigod's scent lead her to Chantal's room (even though it was Alexandra's but Alexandra left a couple minutes after she was left unattended). The empousai knocked on the door and asked to come in and Chantal granted her permission. It started a conversation with her but then in the middle, it attacked her. Chantal freaked and lucky for her, Alexandra was nearby since she was going to bring Chantal up to the stage. When Alexandra was walking, Chantal was struggling to get free of the Empousai's grip. The door was closed so Alexandra kicked the door open and saw the Empousai through the mist. She immediately brought out her celestial bronze sword and slashed the Empousai into bits, but got a couple of scars and bruises herself. Chantal remained unharmed though the Empousai left a scar on her right wrist since it slashed her.

At age 15, she had another monster attack. This time, was when she was doing a concert in a public park. She got attacked by a hellhound when she was roaming around by herself with no security guard since she finally got them off her backs. The hellhound attacked her when she was walking on a path in the park. Logan was nearby, sitting on a bench and saw the attack. He rushed towards her to get her and protect her. In a couple of minutes, he succeeded in disintegrating the hellhound. Logan then escorted her back to her tent in the park so she can be protected there. Logan and Alexandra then concluded that Chantal really needed a weapon to use so she can fend herself. Noting that she handles a bow and arrows really well, Alexandra asked a friend who was a child of Hephaestus to forge a bow and a quiver that produces unlimited amount of celestial bronze arrows for her. Since she couldn't carry it around with her in weapon form where ever she went (since the mortal's would freak out a little if they see someone who was carrying a bow and a quiver full of arrows), Alexandra asked the Hephaestus demigod to make it so that the weapon changes into a music note hair clip. She gave it to Chantal after the project was finished and Chantal always wore it where ever she went.

At age 16, they decided to take Chantal to the camp that was made for demigods like her. They told her about it and she thought it was a great place, but she didn't want to abandon her career. Alexandra said to her that she can announce that she is leaving for a couple of years to do training, and then make a come back when she leaves camp. Liking this idea, Chantal agreed to go to the camp and so they drove her to Long Island with no monster attacks in the way. As they got to the entrance, Chantal said goodbye to both her talent agent and her adopted father and made her way to camp where she was claimed as a daughter of Apollo.

This claim has been approved as a daughter of Apollo. You now need to make a page for them and a word bubble, if you aren't sure how to do this you can see the guide here. Once you have done that you can add your character's name to the cabin list located on the cabin pages and start role playing with your new character. If you have any questions feel free to ask a member of the Admin team.

Retrieved from "https://camphalfbloodroleplay.fandom.com/wiki/Claiming:Camp/Chantal_Floyd?oldid=1327215"
Community content is available under CC-BY-SA unless otherwise noted.