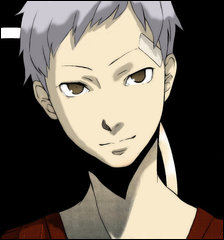 Personality: Hot-headed, reliable, rational, down to earth and friendly.

____ and Franchesca met in a wedding party of her friend. They got to know each other that time and eventually fell for each other. Afterwards, they had an affair and Franchesca gave birth to Charlton. ____ left his lover and son when Charlton was just a year and a half old to work in Dubai, UAE. After that, he didn't visit them anymore. Charlton grew up a well-mannered child and studied in his hometown, Providence in Rhode Island. Franchesca began to wonder why ____ wasn't going home even for once often and eventually she decided that he left them. She became resentful of ____ and lied to Charlton that is father died in a car accident in Dubai. A suitor asked for her hand but she rejected him because she feared that she will be left again. The suitor bore a grudge on her and on Charlton and even threatened that he will forcefully take her as his wife. In school, he had a kind Social Studies teacher named Paul. He wasn't sure why but somehow Paul was very concern of him. One day, while he was walking in a park full of trees, he heard a very beautiful and sweet song. He followed the song into an oak tree. On the branches was a traveling Siren, who was singing while preening her feathers. He saw his greatest desire: meeting his father, ____. But the Siren began to lead him to the lake beside the trees which was deep enough to drown him. Suddenly, a rock flew out of nowhere. It was Paul at good distance away the Siren who threw the rock to ward he off. He rescued Charlton from drowning into the lake in time. Charlton didn't knew much about the experience but he saw his desire and some of the Siren's appearance. Paul led him into an empty alley, which made Charlton confused and scared. Paul removed his pants and revealed his satyr legs. Charlton was shocked to see his Social Studies teacher turn into a satyr. He knew a bit of satyrs which made the shock a bit less. Paul asked him to pack his things and go back to the same spot. At first, Charlton hesistated because his mother will find out but finally he agreed and rushed to his house. When he got there, all the doors and windows were locked but the lights were on. He used a paperclip to pick the door in the back and searched for his mother but he couldn't find her. Why would she lock the doors? And, her mother was always in the house during that time even when he was just a kid. Her mother suddenly disappeared without a trace. He had a hunch that someone or something abducted her. Suddenly, he remembered the threat of his mother's suitor. He packed all his things and went to the alley. He said what he found out. Paul asked him what the guy looks like. He was pretty handsome, medium in height, short sandy hair and bright blue eyes. Paul didn't know who that person was but judging from the suitor's threats on forcing her to be his wife, he had a hunch that he took her somewhere where her family can't find her. After that, he pulled up his pants again to rode a public bus going to Manhattan, New York with Charlton. This time, he was really confused. Why would his teacher take him there? After about an hour, they arrived at Manhattan and headed to Long Island Sound on a taxi. They walked the forested path leading to Camp Half-Blood where he will train to become a hero. Paul went back to satyr form again and gave him a full tour and explanation of his identity, his purpose, his job and the camp. That night, he was claimed by his father, _____, which made him relieved that his father was alive, immortal to be precise. But he bears a big problem that he has to clear: he must find his mother, who is somewhere in the country living with her suitor, or even husband.

Weapons: Boomerang, Buckler (shield) and Katara (a push dagger, not the Waterbender)

Why did Paul know to have was in his ears? And who/what abducted her, because monsters don't go after mortals. RubyRose (Write your heart out here) 01:15, April 15, 2012 (UTC)

This claim has been approved as child of Koios. You now need to make a page for them and a word bubble, if you aren't sure how to do this you can see the guide here. Once you have done that you can add your character's name to the cabin list located on the cabin pages and start role playing with your new character. If you have any questions feel free to ask a member of the Admin team.

Retrieved from "https://camphalfbloodroleplay.fandom.com/wiki/Claiming:Camp/Charlton_Branford?oldid=1218035"
Community content is available under CC-BY-SA unless otherwise noted.