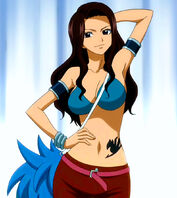 Personality: Very blunt but also outgoing. Loves to drink and never loses in a drinking competition. Cheryl is also head-strong and isn’t afraid of anything (except for blood; Hemophobia). She also doesn’t care on what people think of her. Doesn’t like those people who think they know everything but they don’t. Expert on wines and loves wine tasting. She also acts a bit tomboyish and sometimes a rebel (not all of the time but on occasion). She’s also very athletic as well having to play soccer ever since she was 5 years old.

Dislikes: Having no booze around her, having no friends, being a lone, fro-fro dresses (or poufy dresses in general. Basically anything that’s girlie to her, she doesn't like), stupid people, Blood

Weapon: Hair clip that changes into a sword. Keeps it in her pocket at all times. (Never wears it except for special occasions)

Natasha Anders is a bartender at the local bar in her hometown. Derek (Dionysus) happened to be at the bar she worked at. Having one of too many drinks, he came across Natasha and she was drink as well. They made love (but they were drunk) after a small chat. After that incident, Derek left her and a couple of days later, Natasha got pregnant with Cheryl. The day after Cheryl was born, Dionysus left a present for her on the steps of Natasha’s house for Cheryl: a necklace that 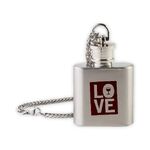 was in a shape of a wine flask and a gold hair clip that can change into a CB sword.

Childhood: Cheryl had it rough in her childhood. She acted very tomboyish and never had girls as her best friends. Cheryl also always hung around the boy’s group. But as she grew up, her friends ignored her since she was a girl and started acting a bit more girlie than she used to be. Cheryl then was by herself, all alone with nobody around her to hang out with. Cheryl then didn’t like the fact that her mother always ignored her and spent her money on alcohol instead of their essential needs.

When Cheryl was 13, that hit the mark of monster attacks for Cheryl. Cheryl was at the backyard, playing soccer in the nearby open areas of her backyard. All of a sudden, a harpy appeared out of nowhere and attacked Cheryl. It slashed her with its claw which eventually knocking out the hair clip she had on her hair. It then turned into a sword to Cheryl’s surprise. Cheryl ran towards the sword and used to slash at the harpy. It disintegrated soon after. Cheryl then ran back home. She tried to forgot about the monster attack but failed.

During the next year, Cheryl got her education by homeschooling. She got minor attacks when she was 14, but they weren't all too severe as the first monster attack she had (just a harpy passing by her and she slashed it with her sword again. It disintegrated after 5 deadly slashes) At age 15, she got her second monster attack, this time it was a hellhound. But in this monster attack, a satyr, who was her protector, ran up and helped her. He used his reed pipes to keep the hellhound in place so Cheryl can attack it using her cb sword. It disintegrated. The satyr told her she should go to camp and she did, only for a week of sword training but that was it. She went back home to take care of her mother. When it was half-way in the year when she was 15, her mother died because of an alcohol over dose. She was put in a foster care soon after but ran away because of the harsh living conditions and the poor treatment she got.

At age 16, she lived on the streets for quite awhile. (But she was being secretly watched by her satyr protector again). She stole to live and was seriously addicted to alcohol. When she was living on the streets, two hellhounds came up at her and attacked her. She took out her clip and it transformed into her sword. Cheryl then slashed wildly at the two hellhounds, getting a lot of scratches and scars from the both of them. She ran and ran as fast as she could. With the two hellhounds behind her back at all times. Just when she thought she was about to give up, her satyr protector and a demigod came to her rescue. He personally ecorted the demigod and Cheryl back to camp.  But in the middle of their journey, they lost the demigod to an Empousai but they disintegrated the monster and still trudged forward. Once they finally got to camp, Cheryl and the satyr were beat up badly. Cheryl was immediately claimed by Dionysus and she stayed at camp since she got claimed.

Why would she not be attacked at the age of 14? And why didn't a satyr come along by the time she was 15?

@Riri  when she was 14 she stayed mostly at home plus she didn't have a strong demigod scent. at age 15, she was all over the place (like living anywhere she can)

Riri, has a point. Even though her scent isn't that strong, she'd still be attacked but of course, it'll be fewer (more like 2 or 3 times). And how about that other demigod who came along with her to camp? What happened to him/her?

the demigod was at least 17 and a half (old enough to live outside of camp) and right after he/she dropped off Cheryl, the next day he/she left.

It seems unlikely to me that with all these years of her mother being alcoholic and not providing food that Cheryl was never taken out of her custody and placed in foster care sooner. It also seems unlikely that her mother would have the competency to homeschool her.

well.... she wasn't taken out of custody because Cheryl wanted to take care of her mother and even if she was to be taken out she would have refused.

and her mother did not homeschool her. she got tutors to tutor her

er, is anybody gonna check this? i kind of feel like its to short. >.>

"Your talent makes you who you are. You should be proud of it."   ~PanPan

How long exactly was she living on the streets? How did the demigods find her?

Couple of months and then she turned 16 1/2. the demigods were on a quest to look for her.

How was she surviving all these attacks on her own?

@bach she just uses her sword to take them all out, but she leave the fight scene with a few cuts and bruises

If it were that easy to survive monster attacks, without any training or explanations, they wouldn't need camp

so i changed that part a bit and i know you'll have questions so fire away. XD

The satyr seems to be M.I.A while she's on the streets. They should still be around, especially when's she's attacked.

Will add that in.

If the satyr was around, why didn't they save Cheryl from the hellhound attack?

@bird is now fixed. anything else? :D

This claim has been approved as daughter of Dionysus. You now need to make a page for them and a word bubble, if you aren't sure how to do this you can see the guide here. Once you have done that you can add your character's name to the cabin list located on the cabin pages and start role playing with your new character. If you have any questions feel free to ask a member of the Admin team.

Retrieved from "https://camphalfbloodroleplay.fandom.com/wiki/Claiming:Camp/Cheryl_Anders?oldid=1201276"
Community content is available under CC-BY-SA unless otherwise noted.