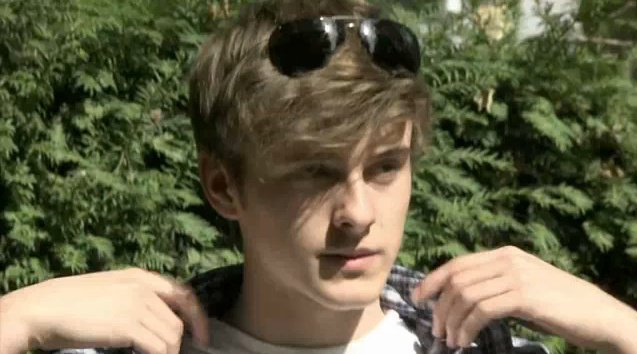 He could be quite cheeky and mischievous sometimes. He is good with words and it's not really easy to spot that he's even making things up. He's a friendly dude and he's like the happy-go-lucky type. He's always chill and doesn't worry a lot even though the situation is already at its worst, he still manages to have some fun.

History: Christopher was born in England having two older brothers, who are twins. He wasn't born in a well-off family. In fact, they were extremely poor.

Naomi Winchester was a loving mother for the twins Jordan and Max. The parents of the rich man George, Naomi's lover, never aprroved of their love but it did not stop George from planning their secret wedding. They were married discreetly--no guests, just them and the pastor. They lived in harmony for years until George's parents discovered that they already started a family, they did all they could to ruin the couple. His parents canceled all of George's bank accounts making sure he could never use them again. They fired him from the company George was in, which was also their family business. Despite all the hardships they started encountering, George worked hard trying to look for a job so he could provide the needs of his family. It came to a point wherein they had to take a loan just to pay for the bills until they became bankrupt and so they had to sell everything they had. And from there, they ended up living in the streets.

One time when they really had nothing to eat, George was forced to steal and he got caught. That's not the worse part of it though. He was also killed. The news of the death of Naomi's husband reached her and made her deeply depressed. Jordan and Max were seven years old back then. Because of too much depression, Naomi almost got insane. She decided to go for a walk at the moment and she left the twins at home. She was crying and crying not knowing what to do then Morpheus saw her and liked her at first sight. He offered her a drink saying it would perhaps make her feel better. Morpheus also used his powers on her to make her think he's a friend and so Naomi did not refuse. After all that, they got drunk and then off they go to a hotel and... it happened.

A baby boy was born only at home after nine months with the help of a mid-wife, who was only their 'neighbor'. So you could just imagine the hardship, the pain, Naomi had gone through.

Naomi didn't exactly know who the father was. Her memory of him was vague and all she could remember was that the man reminded him of George.

Christopher grew up being loved by his mother and his twin older brothers. Despite the fact that they were so poor and it wasn't everyday that they could have a meal, there was still joy in his heart. However, there was a bad side while he grew older. His twin brothers learned how to steal witout being noticed starting when they were four. They never told their mother though. And when Christopher was at the age of five, they taught him their ways. He thought it was fun and so he'd join his brothers as they stole especially from the rich people. They'd go to places where there are many people, rich ones, to be exact. But when Christopher was eight, his life changed when he attempted to steal a very priceless bracelet from a young girl.

He got caught by the girl's body guards and the bracelet was brought back to the girl. When Christopher got a closer look of the girl's face, he instantly had a crush on her. The girl said she'd let the incident slip today but the next time it happened, she won't forgive Christopher anymore. Then the girl left and Christopher tried to stalk her. Thankfully, he wasn't noticed. He hid in the trunk of the car not knowing that they were actually headed home. When they were finally there, he hid again and peeked in one of the windows of the house. The girl was there and she was reading something. It intrigued him. He always wanted to read but never got the chance. Later, the girl finally noticed him peering in. At first she thought of calling the guards but she realized that he's just a kid like her and so, she let him in but it was discreet. No one should know especially her parents. Then they talked and the girl taught him how to read. He did learn a bit but he had difficulties. When someone knocked on the door, the girl told him to go away immediately but Christopher wanted to learn more and so the girl just told him to come back.

They met almost everyday and Christopher enjoyed learning how to read little by little but then they got caught and they had to kick Christopher out of the house. He was almost nine years old by that time. He tried to go back after some time when he was nine but he never got to see the girl again. It was rumored that they moved to America the last few days. He didn't know what to do next... then he had the craziest idea ever. He told his mom that he 'needed' to go to America. When his family heard about this, and they just laughed at the idea but then Naomi had the craziest idea, too. Why not?

Naomi finally had the guts to introduce his sons to their grandparents, George's parents. They still despised Naomi thinking if she didn't marry George then he would still be alive. Naomi loved her sons so much that she pleaded them to take them in. It's fine with her if they didn't like her. She even suggested to just hire her as a nanny for the kids. The idea of taking in the children was approved. However, they do not want Naomi in the household and so they sent her away. Because of this, the children became rebellious and so the grandparents made a decision to let Naomi visit the children once a month.

Jordan, Max, and Christopher were sent to luxurious schools and the twins did very well. As for Christopher, whatever he did, he really had a hard time reading. The grandparents thought the people were a distraction and so they just decided to home school him. Sadly, when he was eleven, he was diagnosed of dyslexia and also ADHD but it did not stop him from wanting to learn how to read and write. He still did his best.

When he was thirteen and the twins were already twenty, they moved to America leaving Naomi alone in England. Their grandparents said they would just stay there for a few years and go back. The siblings continued their studies in America. He got what he wanted when he was nine--go to America in the hope of finding his friend but then he seemed to already shift his focus on his new set of friends in school and also on studies, well, a bit. He loved to hang out with his friends more than study. But one terrible day came when their house was set on fire by accident. Nothing was left but the siblings managed to survive. As for their grandparents, they died. Jordan, Max, and Christopher ended up in the streets, back to zero, just like before. The twins, since they're already adults, they tried looking for a job and they successfully found one in a fast food chain. They managed to save money and were able to rent an apartment for the three of them. As for Christopher, he had to transfer to a public school.

When Christopher almost turned fourteen, he was attacked by harpies on the way to school. Good thing there was a satyr nearby in a disguise of a man. He defended Christopher against the harpies and told him to run. The satyr used his reed pipes to summon grass or any plant that would wrap around the harpies just to slow them down. When they had the chance, they ran as far as they could. The satyr explained to Christopher how he got his demigod scent, which eventually led to the topic of him being a demigod. The satyr also told him he needed to go to camp for that is the only place where demigods like him would be safe. But it was too mcuh for Christopher to take in. He's going to leave again. He told the satyr to give him at least a year to think about it. The satyr refused to let him do that but then Christopher pleaded him. The deal for the satyr though was that he needed to stay by his side so he could defend Christopher.

So after a year, Christopher was already fifteen, and he decided to go with the satyr to camp. He was convinced that he really needed to go after the three attacks he encountered when he was fourteen. First were the harpies, then hellhounds and another set of harpies.

He arrived at camp safely and spent a year. He was also claimed by his father, Morpheus. He made a few friends no... A LOT of friends. One of them is Paige Gabriel, a daughter of Demeter, and she was just thirteen back then. They became sort of best friends. They spent most of their time together back in those years. A year later, when Christopher was already sixteen, he decided to go out for a while and visit his mother back in England.

For two years, now he's eighteen, he searched for his mother. He went back to the old place where they grew up but she wasn't there. He didn't stop. Through the years, monsters also became a part of his life but he managed to defeat them using his skills, which he learned in camp during his stay. Also, they were pretty easy to beat and it wasn't like he was attacked everyday. He was only attacked two to three times a year since he's a son of a minor deity. Then one day, he just heard the news from their 'neighbors' that Naomi died a few years ago, four years ago to be exact. She died because of depression that she never got to see her sons for so long. She refused to eat and because of that she eventually died.

At first, Christopher did not want to believe until the people showed him to her grave. Upon seeing it, he felt bad and depressed, as well. Because of that, he decided to finally go back to camp.

CB Broadsword, which he got at camp

This claim has been approved as child of Morpheus. You now need to make a page for them and a word bubble, if you aren't sure how to do this you can see the guide here. Once you have done that you can add your character's name to the cabin list located on the cabin pages and start role playing with your new character. If you have any questions feel free to ask a member of the Admin team.

Retrieved from "https://camphalfbloodroleplay.fandom.com/wiki/Claiming:Camp/Christopher_Winchester?oldid=1217898"
Community content is available under CC-BY-SA unless otherwise noted.