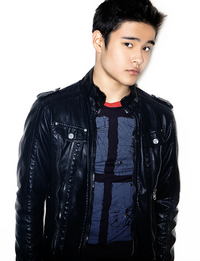 Personality: Most of the time, he insults others and loves to make fun of them. He is kind of competitive. He cannot afford to lose something. When he does, he thinks of a way for him to win. Perhaps in another time he and his opponent meet. But he never cheats. He loves to play it fair and square.

Chuluun was born in one of the province of Mongolia, in Khovd. Bataar Zaya, his father, met Nemesis when he was in California, working as an archaelogist. He was conducting seminars about his country, Mongolia, and well, Nemesis listened to his talks.

The two fell in love and started dating. Bataar even brought Nemesis to his homeland. One night, after a few years of dating, Chuluun was born but Nemesis immediately left after she bore him. Bataar raised the child alone. But Nemesis left a note telling everything to Bataar, who she really was, the camp, their son being a demigod, the monsters to come, all he had to know. She also left him a celestial bronze sabre and told him to give it to Chuluun when the time was right.

Bataar and Chuluun stayed in Khovd for years. Chuluun was diagnosed of dyslexia and ADHD when he was six. His father taught him basic sword-fighting and also martial arts  for him to know how to defend himself. Bataar showed him the sabre Nemesis gave him. The thing amazed Chuluun. Bataar did not give it to him just yet but said it would be his in the right time. When Chuluun turned eleven, they went back to America because his father had to work there.

When he was twelve, he and his dad were kidnapped one night by a mysterious group of demigods--the ones they call the rebels. They were brought to an abandoned building in a marketplace familiar to Chuluun and Bataar. The rebels did not introduce themselves but they knew Chuluun was a demigod. They asked him to join them or else his father dies. His father taught him about about making decisions for himself--distinguishing good from evil. He knew it was a bad choice to refuse but he also knew it was worse to join them. He tried to fight the demigods but he wasn't trained well, so obviously, he lost and his father got killed. His father's death made him feel wrath towards them. It drove him to want to take revenge against them. Unconsciously, he released a powerful wave of energy that made the demigods fall to the ground. He thought it was wiser to escape while he had the chance. He decided to go back to their house first and pack his stuff. He quickly grabbed his sabre, the one his father had been keeping, and packed some clothes. Harpies stopped him from going out of his house. He tried to kill them but his attack missed everytime. Thankfully, a satyr came and together, they killed the harpies. Chuluun was then brought to camp.

He spent his years training in camp. He had finally turned 16. He always thought of who the rebels were and his fathers death. He kept on blaming himself for his death. He didn't really interact with the campers and so, he always seemed like a stranger to them.

This claim has been approved as a son of Nemesis. You now need to make a page for them and a word bubble, if you aren't sure how to do this you can see the guide here. Once you have done that you can add your character's name to the cabin list located on the cabin pages and start role playing with your new character. If you have any questions feel free to ask a member of the Admin team.

Retrieved from "https://camphalfbloodroleplay.fandom.com/wiki/Claiming:Camp/Chuluun_Zaya?oldid=1218138"
Community content is available under CC-BY-SA unless otherwise noted.