Appearance: 5 foot tall 11 inches. light dark grayish-black armor, Boots that lace on both sides in a blue and white lacing. (When not wearing armor) Dark brown hair hair that slides across the forehead like a wrap, with tufts of hair sticking up in the front. Blue eyes at natural, but when angry they gain a yellow-gray diamond-shaped haze around his pupil. 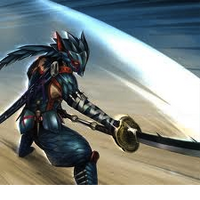 Personality: At first would appear dark and demeaning, or ready to kill, to get what he wants. But really is kind and friendly, ready to make friends with anyone. Knows what it is like to trust someone and then be stabbed in the back, then to have to trust that person again to survive. Can smooth talk anyone out of thinking anything. Often gets into trouble for smooth talking the wrong people at which he bursts out in anger, and reaches for his sword. quiet in speech and when moving.

History: Doesn't remember much of his past. His mother was a poor woman, supposedly left by her husband so he could go mess with some other woman. She worked 3 jobs to keep an income to support herself and her son. Her son squanderd that money on wine and dark magic tricks, but one day he was doing bad stuff with some friends one day, drinking wine, and a man pulled up in a grey suit with purple tie. Asked him into the car, and take a ride with him on behalf of his mother. That man took him to a wine factory, and showed him around in a hope to get young Cyon to change his ways. That night, Cyon was walking home from the wine factory and he was attacked by a fury, he then began to run home, where his mother gave him a sword called shadow-bender which had been given to her the day Cyon turned 13, which was a year and a half ago. A sword that Dionysus had bartered with Nyx to get, to help Cyon upon his journey. Dionysus had wanted Cyon to have the sword so that he won't be like the rest of his children, "defenseless" except for smooth talking. His mother then helped him pack his backpack for a camp, that she said he had been awaited at for. He ran out of the basement exit in the backyard, jumped over the fence and the fury chased after him, it hit the power-line and with a thunderous screech it hit the ground dead. He began to run from the sight of people until he found a forest at the edge of a sign that said "No Trespassing" he of course went in. and walked for miles until he found an archway He then walked into the camp, and Now his true story beings

Weapons: Smooth talking, A 5 foot sword, called the shadow-bender longsword (which leaves a tracing trail of black light when you swing it)

Why did his mother have a sword, where'd she get it? How did she know about gods/etc? I don't think you can sign someone up for CHB, and that last part about being tackled and the line of spear throwers if from the PJO movie, and is really unnecessary anyways. "I am the Master of my Fate; I am the Captain of my Soul." Ruby's blog! 21:38, March 14, 2012 (UTC)

This claim has been approved as child of Dionysus. You now need to make a page for them and a word bubble, if you aren't sure how to do this you can see the guide here. Once you have done that you can add your character's name to the cabin list located on the cabin pages and start role playing with your new character. If you have any questions feel free to ask a member of the Admin team.

Retrieved from "https://camphalfbloodroleplay.fandom.com/wiki/Claiming:Camp/Cyon_Nargaroth?oldid=1523653"
Community content is available under CC-BY-SA unless otherwise noted.