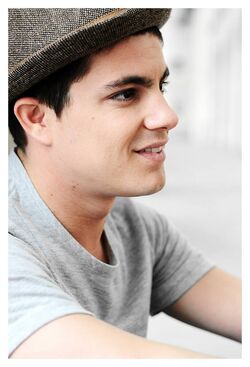 Personality:He is happy go lucky, childish, and tries to keep things light. This is a product of trying to be a child again, because his childhood was taken away from him. He is afraid of religion, and is easy to make cry. He tries to fight off his memories by training with a sword. Dallas is deeply in love with his creator, Tyche.

David and Romera Arias, a poor campesino (farmer) couple in Pradilla, Colombia, have a child. They named him Dallas, a city in which Romera's sister lived in. Like good Colombians, they said the ll like an english y. They struggled to make ends meet, trying to pay off the land they own.

When Dallas was about four, David died of a heart attack. Romera, being a young wife, tried to look for more work. Their life on the farm was harder without the head of the family. A man in town offered her work in Europe, modeling, with promises of good pay. Thinking of her son, Romera took the job, leaving Dallas in the hands of her brother, Yasun, who lived in Medellín. It was a bad idea. Unwittingly, Romera had been sold into prostitution in Spain, never again to go back to Colombia and her son. She made good money, grew to the top of the prostitution ring, but was too ashamed to ever face her family again.

In Medellín, Rodrigo started taking Dallas to mass, as a good roman catholic. Dallas always enjoyed his time there, starting to believe in someone higher than himself. Although he had basic knowledge, since he was a child, he still understood that he was becoming involved in something bigger than himself.

At seven, Dallas began preparing for his first communion. It was a big step in his life, and a proud moment in the family. He was a spiritual boy, and wanted to take on more responsibilities in the church. He couldn't wait to become an altar boy. As he prepared for his first communion, he met father Arturo, a kindly old man who oversaw the communion preparation problem. Dallas came to adore him, almost as much as God himself.

Dallas had his first communion at eight. In his mind, he'd become a real man of the church. As soon as he could, he asked to become an altar boy. They allowed him to, and soon he was practicing his duties that he'd have to perform during mass. Luckily, or maybe unluckily, the priest for that particular mass was to be father Arturo. Dallas was excited about this, and tried to spend lots of time with him. Arturo obliged.

After his first mass as an altar boy, father Arturo invited him out for a bite to eat,to celebrate him becoming an altar boy. Rodrigo let Dallas go. At the restaurant, Dallas kept gettiing complimented. The time there went from normal to strange, with father Arturo's comments getting odder and odder. At one point, he joked that Dallas would do just about anything for him, and Dallas innocently nodded his head of course. father Arturo smiled at that.

As they parked outside of Dallas' home, father Arturo gave the boy a little kiss, and copped a feel. Dallas got out of the car,shocked and confused, and went home. He told no one.

After three years of being molested and sexually abused, Dallas finally escaped father Arturo's grip. Someone else had pressed charges on father Arturo for his deeds, and so the Church tried to hush up the situation by moving him out of the circle and offering the boy's family hush money. Dallas never spoke up about what happened to him, not to anyone, but it had affected him psychologically and spiritually. When he realized what was truly happening, he began to lose faith, and feel guilty and ashamed. He felt as if it was his fault, that he had forced the old kindly priest to do these things to him. Dallas even felt guilty for him leaving.

Rodrigo was worried about Dallas, as he seemed off. Unfortunately, Colombia is a country run by machismo. Instead of taking him to a psychologist to sort out the issue with his nephew, Rodrigo told him to not be a sissy, asking him to man up, as Dallas seemed reserved and skidish, not at all the happy child he was before. In school, he got bullied for his sensitive demeanor, picked on for being an outsider. This of course, didn't help.

At fourteen, Dallas began to cut himself. He also thinks of suicide on the daily. He made no friends, and was more disdanced from his family. He has his first suicide attempt, which failed because he took an overdose of vitamin C pills, mistaking them for antidepressant pills.

2005 Dallas finally made a friend. The friend was the schools joker, the one who no one took seriously. He put some light in Dallas' life, just enough to stop his suicide attempts for while. The friend, being daring and childish, influenced Dallas to be more like him. He went from being a nervous, anxiety stricken recluse, to a happy-appearing, daredevil shy guy. In a way, he was reclaiming his lost childhood. He finally tried to move on from his shameful past, pushing forward with a childish persona.

Dallas graduated secondary school and goes onto la Universidad Nacional of Colombia with his friend. 2008

Around the beginning of 2008, Dallas unknowingly met Tyche. She presented herself as a student of the university, a freshman like him. Dallas had never thought about love before, for obvious reasons, but meeting the disguised Tyche had gotten him thinking in that direction. On the day he took her out on a first date, however, his friend died, after the roof of the aprtment collapsed on him. It was really just Dallas' luck that he hadn't died either, as if it weren't for the date, he would've been in their shared apartment too, and the roof would have collapsed on him. Dallas relapsed into being a recluse, and relapsed into cutting himself.

Tyche, who had grown some feelings for him, tried to help him. Seeing Dallas so weak and hurting, she wanted for him to finally have some luck. In a way, she grew to root for him. One day, he couldn't take it anymore, and went to hang himself, but not before calling Tyche. She managed to reach their just as he hung himself and died. In desperation to save him, and give him another chance at life and luck, Tyche changed him into a luck spirit, taking him to Mount Olmypus. There, he woke up, feeling new. Tyche explained she was a goddess, and that she had brought him to be her servant to give him another chance. She left out the part of possibly loving him too much to let him go.

On Olympus, Dallas did all the tasks Tyche asked of him, being a good servant. The two grew close as servant and master, and Dallas fell more and more for her everyday. His time on Olympus changed him once again, going back to his happy-appearing, childish self. Tyche did for him like his friend had done for him. He felt grateful at the opportunity at a new life.

Dallas learned english on Olympus, and Tyche introduced him to sword fighting. Dallas trained with other spirits and nymphs, gaining skill with a sword. He used it as an outlet, whenever the bad memories came back. Despite him not telling her, Tyche knew the sexual abuse Dallas had been through, and so, took consideration to not start any kind of relationship with him.

Over the years, Dallas' feelings had grown too strong, as had Tyche's. Becuase of this, Tyche assigned Dallas to go to camp to get away from her, for his own good. She sent him off with the gift of a sword, and made him promise to remember that despite the darkness of his past, he would look towards the future. She reminded him that as a luck spirit, he should find more luck than he had before.

Weapons:A celestial bronze sword with a leather white scabbard, and a green four leaf clover symbol on the scabbard. has straps that let it be strapped across his back.

This claim has been approved as A Luck Spirit. You now need to make a page for them and a word bubble, if you aren't sure how to do this you can see the guide here. Once you have done that you can add your character's name to the cabin list located on the cabin pages and start role playing with your new character. If you have any questions feel free to ask a member of the Admin team.

Retrieved from "https://camphalfbloodroleplay.fandom.com/wiki/Claiming:Camp/Dallas_Arias?oldid=1786241"
Community content is available under CC-BY-SA unless otherwise noted.