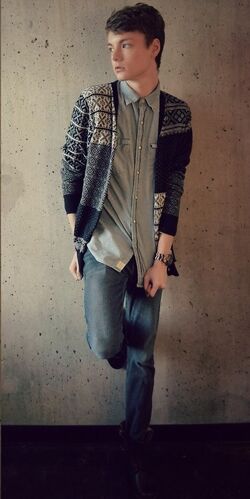 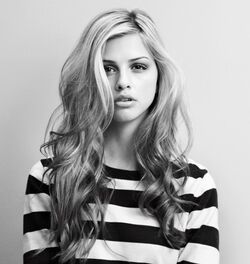 Personality: Dallas and Dakota are both anti-social. Dallas normally shrugging people off and Dakota normally just bitching them out. Dallas values and cares for Dakota more than most brothers would a sister and the feeling is vice versa. Since their mother kicked them out, they're all they have..

History:Shauna Miller was a mortal woman who lived in North Carolina, she was about 20 and worked in a fast food restaurant while she went to college. She stared dating a man, he was so amazing. He was sweet, and caring. Anything a woman could ask for. One night they decided to go to the bar to have some fun. They got way more than they expected. Shauna found herself alone in her bed and a note on the bed table. It explained most things about the demigod life their child would live. It also had the address of Camp Half-Blood.

She didn't understand at first, because she didn't think she was pregnant. She didn't think he'd actually left her. She was in major denial though. Nine months later she bore a daughter named Dakota, she had raised the daughter of honey with barely any money to hold on to. But she greatly missed Aristaeus, when Dakota was a few months to began to burn bees in his honor hoping to bring him back. Granted it was quite foolish, but love makes people do crazy things.

Anyway Aristaeus did come back, but he was furious with Shauna. He brutally beat and raped the poor girl, causing her to be pregnant with her second child. After the incident Shauna knew she'd never see the god again and that was for the best. She wanted an abortion, but decided against it. Instead she gave birth to the boy, named him Dallas and gave him to her brother to take care of. Since she couldn't afford to raise two children.

Anyway Shauna grew to have a fine job and was more than able to raise Dakota, the lovely girl who was a living memory of her happy relationship with her time with Aristaeus. She refused to take Dallas back, since he only served as a memory of how she was raped. So the siblings only met occasionally growing up, Shauna's hatred and resentment of Dallas being quite obvious. But while Dakota was being spoiled rotten by her Dallas had a different story to tell...

Dallas' uncle was actually quite pleasant for the first few years, but after he had lost his job and fell into a deep depression. He had become a drunk and had started to beat Dallas from when he was 6. This and the resentment from his mother made him feel practically worthless.

Dakota was very spoiled as a child. Her mother drowned her in presents weekly, sometimes daily. Everyone loved Dakota, despite her hard and rigid personality.. she was always looking out for someone, putting others before herself. Her mother would still have small flashbacks of when her ex-lover had raped her. When that ‘’did’’ happen, she would hold Dakota tight and rock her back and forth, mumbling how much she loved her.

By the time Dakota was 12 and Dallas was 11, their Uncle Jeffrey had suffered a heart attack and died. Shauna had gone through serious therapy, since she had always had nightmares about how she was violently raped. She learned that Dallas was not to blame, so Shauna willingly allowed him to live with her and Dakota.

Dallas mostly kept to himself at first, his sister was almost a stranger to him. When Dallas had moved in, Dakota kept her distance. She remembered how her mother would constantly disown Dallas whenever Dakota had asked about him. A week passed and she realized how Dallas wasn’t so bad. He was quiet and always to himself. Despite the hatred his mother had given him, he would occasionally help her with small things like putting the groceries in the fridge while watching her shower Dakota in hugs and kisses. Dakota then started talking to Dallas.

But he was shy and he didn't really talk to her until after a month, whenever the bullies gave her a hard time Dakota would always step in. They grew closer as the months went on, Dakota had formed a secret crush on her brother.

This all went on for a year, a few weeks after they were celebrating Dallas' 12th birthday, the Miller kids were attacked by a stymphalian bird. A 13 year old Dakota panicked and accidentally fired stingers into one of it's wings. This gave the bird a harder time to pursue it's prey. Fortunately the beast was ensnared in a large number of vines. Their savior was a satyr who brought them to camp.

The Miller kids had told their mom of everything before their departure and were claimed by Aristaeus upon arrival, since the hunting god lacked a cabin at the time. They were placed in the hermes cabin for two years, after their much needed training they left Camp Half Blood since they were quite bored.

They returned to their mother's home, where they spent the next 3 years fending off monsters and going to school. But Dakota's feelings for Dallas still remained. At this point she was 18, still a year older than her brother. Who was off hanging out with his girlfriend Mona at the time. After he dropped her home and tried to make his way back, he was met by Lady Aphrodite. She did her best to seduce Dallas, but he simply told her "back off skank" and passed her aside. Naturally being the goddess of love and beauty would give you a ego that would far surpass your fellow deities.

She had used her dominion over love to learn two things. Dallas was in love with Mona, while Dakota was still in love with him. For revenge and giggles, she cursed Dallas to have an intense burning lust for Dakota. The goddess knew he wouldn't like it at all, but did she care? Not at all.

That night Dallas found his sister, declothed her and made intense love to her. Dakota was of course shocked but didn't really object to these actions. After the dirty business, Dallas was shocked and disgusted with himself. Their mother had found the two of them naked, disgusted with them for clearly partaking in the forbidden fruit of incest she kicked both of them out. With nowhere else to go, they returned to Camp Half Blood and were glad to see their father managed to receive a cabin. Dallas being disgusted and ashamed of himself considering himself a disgusting pig for possessing these desires for his sister.

This claim has been approved as children of Aristaeus. You now need to make a page for them and a word bubble, if you aren't sure how to do this you can see the guide here. Once you have done that you can add your character's name to the cabin list located on the cabin pages and start role playing with your new character. If you have any questions feel free to ask a member of the Admin team.

Retrieved from "https://camphalfbloodroleplay.fandom.com/wiki/Claiming:Camp/Dallas_and_Dakota_Miller?oldid=1792623"
Community content is available under CC-BY-SA unless otherwise noted.