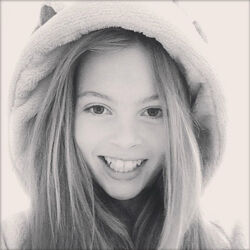 Personality: She's very cheery and happy. She sparks with energy and excitement. She loves to run, skip, jump, and hop. She is also very curious and often gets confused if she's in a big place.

History: 3 years before Ethan and Cato went to camp, Laina fell in love again with a handsome, young man. She walked up to him and said hello, and left. Eros/Notus/Hades, his name disguised as Harold, was confused and walked up to her. He got to know her better and she brought him home. They drank wine and they slept together. When Laina woke up the next morning, Harold left without a trace, but left a note saying, "Dearest Laina, my name is Eros/Notus/Hades, and I know you had an affair before with Aeolus, I am a god as well. Please forgive me." Laina crumpled up the note, fustrated with the gods, but didn't say a word due to the fact she had 2 sons that were demigods, and soon another demigod child. Of course, Cato and Ethan got suspicious of their mother onto how she was gaining weight. She didn't say a word. Instead, she sent them off to live with their aunt for awhile while she was pregnate.

When Dani was 9 years old, she didn't know her mum very much, because she lived with her grandma. Dani's grandma was like a mum to her. She treated her with kindness, loving, and compassion. But, Dani always had this strange feeling she was watched. It always bugged her, she fought it off, despite someone was watching her. Dani had enemies, but none plotted against her. She had friends who envy her, but never said a word. She grew up in a kind of a friendly neightborhood. A few crabby neighbors here and there, but otherwise, nice.

4 years later, Dani is now 13 and went to school with only a few friends. But she had a very close friend named Jessie. She and Jessie were very good friends. Jessie said to Dani that she "was her protector". Dani didn't know what that meant, but Jessie said nevermind. After school, Dani and Jessie saw a stray dog. Dani walked up to the dog, but the dog growled. The dog grew into a very large dog. Jessie tossed Dani a dagger that shined Dani panicked because she didn't know what to do. Instead, Jessie said for her to copy her moves. That's what Dani did. She copied Jessie's moved and killed the hellhound with a few injuries, but nothing major. Jessie told Dani to follow her. Jessie now explained why she was Dani's protector. Jessie was a saytr sent by Eros/Notus/Hades to take Dani to a special camp for kids just like her. She followed Jessie to this camp by foot. Dani complained about her feet getting tired, so they took a cab. They stopped at a hill with a tall pine tree, Dani and Jessie saw camp up ahead. They both raced each other to who would get to the border faster. Jessie won due to the fact she was a saytr. Jessie stepped out of the way so Dani could get in, and when she went into camp, she felt safer, like she belonged. She smiled at Jessie and the dagger turned into a necklace and Jessie helped Dani put it on.

Kindly sign this with four tildes (~). Is this character's history related to other previous claims? If yes, would you mind linking me? If no, kindly explain further who Ethan and Cato are. Also, Cato and Ethan would still have known that Laina was having another child because her body would show signs of conception, especially after 5 or so months. Kindly add more to her childhood.  A new demigod wouldn't be able to kill a hellhound with only a scratch on her face. How did they get to camp? Take your time. I've got forever to wait -Demi ღ

This claim has been approved as a child of Eros. You now need to make a page for them and a word bubble, if you aren't sure how to do this you can see the guide here. Once you have done that you can add your character's name to the cabin list located on the cabin pages and start role playing with your new character. If you have any questions feel free to ask a member of the Admin team.

Retrieved from "https://camphalfbloodroleplay.fandom.com/wiki/Claiming:Camp/Danielle_%22Dani%22_Marks?oldid=1220397"
Community content is available under CC-BY-SA unless otherwise noted.