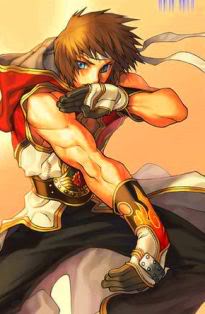 Personality: Danny is a nice guy.He likes to greet everyone with a smile and get to know them.He really likes to eat a lot,no matter how much it is or how fattening it looks.He works it off by training whenever he has the time.He also likes to fight extremely powerful adversaries just to test his limits.

History: One day,the god Hephaestus created a fire nymph to help him in his forging.His name was Danny and he very much respected Hephaestus.He helped him keep the Forge's fire burning at the right temperature so his creator could craft his inventions.

In his spare time,Danny taught himself martial arts from books he borrowed from Nike.He was doing surprisingly well,practicing at a black belt's level.He loved to spar with other nymphs,practicing his new moves on them,beating them time and time again.Hephaestus wasn't bothered at his creation's interest in unarmed combat.It actually amused him,as he fought like a warrior.Danny was enjoying himself very well.

Then one day,while Danny was on his break,Hephaestus came to him and decided that it was time he went down to the mortal world for a while.Danny had never been down from Olympus before,so he was eager and excited.Hephaestus smiled and said that he would like where he would be staying.He then sent him down to the entrance of Camp Half-Blood.

This claim has been approved as fire nymph. You now need to make a page for them and a word bubble, if you aren't sure how to do this you can see the guide here. Once you have done that you can add your character's name to the cabin list located on the cabin pages and start role playing with your new character. If you have any questions feel free to ask a member of the Admin team.

Retrieved from "https://camphalfbloodroleplay.fandom.com/wiki/Claiming:Camp/Danny?oldid=1581816"
Community content is available under CC-BY-SA unless otherwise noted.