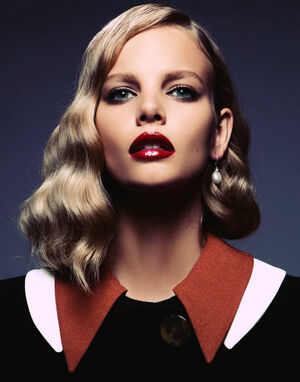 Personality:  Immature and a bit goofy.Although she is the eldest of the two sisters she doesn't behave that way. She hates taking responsibility and loves to have fun. She usually acts on impulse instead of thinking things through. She is flirtatious but loyal towards her promise to Artemis

Emanuel “Manny” Oliver was a famed sax player who toured around England in the early 1900s, spreading those bluesy vibes. He played mainly in the few underground speakeasies in London and its fringes during this time, he met a beautiful woman. She was an elegant and classy lady and all the men in the bar were drawn to her, but she chose Manny to go home with. He bedded her, and the next day she was gone, leaving only a note saying, “You did well, expect a reward later.” For nine months, life continued as normal for Manny, until the arrival of Darcy, a giggling bundle of joy left on the doorstep of the place he was staying at, at the time. He had no means to care for Darcy, and had his mother look after her in her London home, visiting Darcy each week.

He continued touring, adding jazz to his repertoire. It was around two years after Darcy’s birth that he spotted another woman in a bar. She was the opposite of Darcy’s mother, being dark and quiet, silently enjoying Manny’s blues playing. He played a solo in front of her and asked her to come home with him, she agreed.  He bedded her also, and she too was gone in the morning, leaving a note saying, “Thank you.”

Another nine months later, Emmaline arrived at Manny’s doorstep, and she too was sent to her grandmother’s house, to live with her older sister Darcy. Many was concerned at the fact he now had two children to care for, and concerned they weren't really his.He tried tracking down the women he had bedded, to no avail. Accepting the girls, he got a daytime job on top of his jazz and blues playing, and made enough for the girls to come live with him as he travelled around England.

Darcy grew up spoiled by her grandmother; she was always a bit silly, yet cunning. When Emma came into her life, she was happy to have someone to play with even though they were two years apart. As they grew older and traveling with their dad, it became obvious that although Darcy was the eldest she was also the least responsible. Emma, since the age of six, had to always keep Darcy out of trouble.

They were home schooled, due to the fact that they traveled constantly with their dad. They never stayed in a city for more than a day or two, and sometimes they'd spend a whole day with their dad gone. Darcy was always put in charge, but she'd usually get taken care of by Emma. As they got older and Jazz got popular Darcy got wilder. She became a flapper, and was always going out, only to get back home an hour or so before their dad. Sometimes, she'd be able to convince conservative Emma to come along as well.

Life was going smoothly, but then Darcy fell in love. She'd met this guy named Damien, and it was love at first sight... for her at least. Manny didn't approve of him, and told Darcy they'd be leaving town soon anyway so she'd might as well get over him. But Darcy couldn't, she loved him far too much and decided to runaway and stay with him. She was naive and innocent still at the time, trusting any and everything she was told and Damien had told her many sweet and deceiving things.

When she arrived to their rendezvous point, Damien was already there waiting for her looking extremely furious and a bit crazed. She was ten minutes late, she thought this was the reason for his look of anger. She was extremely far from right, as she ran to him spluttering apologies her growled in anger; this caused her to stop mid apology and mid step. "You stupid bitch, I don't care that you're late! I just camp believe how naive you are. You don't even know your heritage do you?" he asked in a deadly calm voice. She didn't answer him; her eyes were open wide in fear as if she was a deer in headlights . "Do you?" he repeated himself, speaking a bit louder this time.

"N-no, what are you talking about?" she stuttered as she began walking towards him again, thinking maybe he had a fever from sitting outside at night too long. He too began walking towards her, his steps longer and faster. When he met her in the middle he took her by the throat, using only one hand to lift her from the ground. As she gasped for air in vain and scratched at his hands he explained, "You see,sister, our Mum is aphrodite. The greek goddess of beauty and love, but she isn't a good mommy, she is spiteful." He finally dropped Darcy, letting her crumble to the ground and gasp for air.

He walked around her in circles, hands clasped behind his back as he continued, "I was in love with a beau-". Darcy cut him off abruptly "H-how do you know I'm a daughter of.. A-aphrodite" she stuttered between gasps and looked up at him . He kicked her in the face, causing her to flip back and loose a tooth. "I can tell your a demigod, and with your beauty and sweet talking it's quite obvious. I only had to spend a day with you to know. I'm surprised you weren't attacked already... Anyways as I was saying: I was in love with a beautiful woman. I made the mistake of comparing her to mother,and mother didn't take kindly to that. To spite me she killed my beloved and when I killed myself, she resurrected me and made me immortal.

"I will never be able to move on and be with my beloved. So for my revenge, I shall kill you... a beautiful, innocent,girl. Just like my beloved, except you are a daughter of Aphrodite so she will know how I feel." He chuckled and bent over to strike her, when she stopped him a question hoping to stall her demise. "W-why me? I'm sure there are others..." she stuttered. "Oooh, you're not the first that I've killed. I do it every year on the anniversary of my loves death, but I wasn't always sure if the girl was a child of mother. But with you, with you it's different. I'm positive you are a daughter of aphrodite, and this time I know I'll get a reaction out of her." With that being said he went on to beating Darcy senseless.

She screamed and screamed but to no avail... or so it seemed. Artemis and her Huntresses were near bye hunting a monster when they heard her call for help. The split off, one group continuing the mission and the other went to help Darcy. When they got to darcy she was already passed out, and Damien was kicking her limp body. Artemise dealt with damien herself, and when she was done she gave Darcy the option of dying or becoming a huntress. She accepted, under the condition that her sister would also be given the choice.

Artemise agreed and after pledging herself to artemis and the hunt they went to her sister Emmeline who did so as well. They hunted with artemise for years and just decided to take a break and come visit the famous Camp Half Blood.

Who's that lady? That foxy lady? Wait...Nevermind it's just Astrid!

This claim has been approved as huntress of Artemis. You now need to make a page for them and a word bubble, if you aren't sure how to do this you can see the guide here. Once you have done that you can add your character's name to the cabin list located on the cabin pages and start role playing with your new character. If you have any questions feel free to ask a member of the Admin team.

Retrieved from "https://camphalfbloodroleplay.fandom.com/wiki/Claiming:Camp/Darcy_Oliver?oldid=1819492"
Community content is available under CC-BY-SA unless otherwise noted.