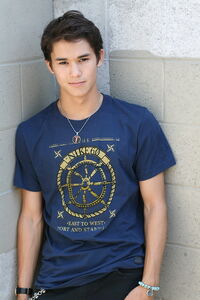 Personality: Delsin sports a classic rebellious attitude, he gives no heed to any sort of authority. He's spiteful, quite rude and seems somewhat dependent on his powers. He is also a vandal, not able to resist the thrill of secretly going into town and damaging public property.

History: Troy Rogue was a police officer who lived in the Blackfeet Indian Reservation in Montana. The dwelling of the Blackfoot Tribe is a well off area, with spruce forests and grassy mountains. Just the place that would peak the attention of the nature goddess Cybele.

Now Troy was a single father, raising a 6 year old boy he named Reggie. Reggie was secretly a child of Themis, since Troy's work impressed the titaness of law and order. But he was still in love with her, it pained him when he was left with Reggie to raise alone.

He had tried to get into dating again, he wasn't quite successful. Until he met with Cybele, since they got together well Reggie thought he had gotten over Themis.

Since he was a gentleman, he wasn't quick to hop in the bed with her. But when they finally did, Troy got his heartbroken again. Cybele birthed him another child and left him on the desk in his office. So when Troy found the baby, he knew in his heart he'd never see Cybele again and he wasn't wrong.

He named the boy Delsin, having no idea he'd be quite difficult. Reggie was a model student, he did his homework, obeyed every rule and was very respectful. Troy hoped Delsin would take him as a role model, but the son of nature decided to go on another direction. Delsin grew up rebelling against his father, teachers and ESPECIALLY his brother.

He loved his family, but the boy hated any kind of restriction or order. When he was 10, he began to form an interest in graffiti. After stealing a few aerosol spray cans, Delsin realized he had an impressive talent for it.

So from then on, he received a reputation as the local delinquent. His father would normally have to be the one to arrest him. Reggie also wasn't happy about this, being 17 at this point he had already been taken to camp by a satyr and received his training.

He told his dad everything, but decided to keep it a secret from Delsin. Having thought he was a mortal. But when Delsin was 13, two important things happened to him. One he was hanging out at the park and was attacked by a harpy. The second thing was that he accidentally used his powers to earth travel away from the beast.

He realized somehow he had Ecokinesis, in layman's terms powers over nature. He could levitate rocks, create leaf tornadoes and communicate with animals. He never told his parents or brother about the attack or his powers.

So for a year, Delsin began to self teach himself control over his powers. He would also use these powers to cause trouble, like commanding sharp rocks to fly through billboards or have large boulders fly into empty cars. He did this for fun and laughs, naturally the local police had no clue what was going on. Of course with all this fun he was having, he was oblivious to Reggie's monster attacks.

When he turned 14, Delsin was attacked by a cyclops. Reggie saw the beast, but not his little brother. Aged of 21, the son of law went to slay the beast. Delsin had managed to earth travel away before he was seen, Reggie had slain the beast. Since the one eyed maruader wasn't attacking him, he suspected he wasn't the only demigod on the reserve.

So for another year, Delsin went on about his business and Reggie went along his. Neither brother knowing of eachother's demigod nature. But this all ended when both brothers were attacked by a pack of fire breathing horses a few weeks after Delsin's 15th birthday. It wasn't easy, but Reggie managed to best them all. Being saved by the occasional earth wall supplied by his younger brother. After this incident, Reggie immediately dragged him to camp where he was claimed by Cybele.

Weapons: A CB chain whip he quickly received one his first day at Camp.

Please sign your claim. If Reggie was a demigod and had monster attacks, why didn't Delsin ever notice them?

Retrieved from "https://camphalfbloodroleplay.fandom.com/wiki/Claiming:Camp/Delsin_Rogue?oldid=1361629"
Community content is available under CC-BY-SA unless otherwise noted.