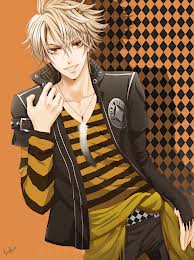 Personality: He is very protective for the ones he loves. He will do anything and everything he can to protect them, even if that makes them hate him. He goes a bit over board and is the Big Brother type.

Tessa was in the Marines training camp when she met Donovan's father. He would often come around her dorm and talk with her and trying to convince her to go on a date. After dating a few months Tessa was head over heals for Donovan and she soon discovered she was pregnant. When she told Donovan's father he had just discovered that he'd been "shipped off to war". After he left she never heard from him again. She stayed in the marines and went onto pregnancy leave, until Donovan was born. A year later she was shipped off to war.

Donovan grew up with a nanny and only saw his mom occasionally.He was home schooled and wanted to make friends. He liked fighting, so he took up various martial art classes as a hobby, as well as a way to meet people his age when he was 7. To his surprise he was good at it. He entered many tournaments and won most, at one of his first tournaments he met his best friend named, Shamous.

At age 13 Donovan received a gift from an anonymous person through the mail. It was a simple feather necklace and he was going to throw it away, but Shamous convinced him not to. Instead he got Donovan to take special Weaponry classes, which Donovan excelled in.

At age 14 Donovan when donovan was about to be attacked by two baby hell hounds his necklace began to glow when he touched it, it became a beautiful CB "horse sabre sword". Because of his training he was able to easily take them down, but when he saw that they'd turned to dust he kept it to himself.

A few months later a week before he turned 15 he was attacked once again by a hellhound. This time shamous was with him, and when Donovan killed the beast he was surprised by the fact the fact that, well Donovan wasn't surprised. Shamous then explained to Donovan that he was a satyr and that Donovan was a demigod. Donovan easily believed him and that night he ran away to chb

On their way to camp they were attacked by a fire breathing horse. Donovan killed it quickly enough, but still received a few burns. Now Donovan is at camp waiting to be claimed

This claim has been approved as a son of Ares. You now need to make a page for them and a word bubble, if you aren't sure how to do this you can see the guide here. Once you have done that you can add your character's name to the cabin list located on the cabin pages and start role playing with your new character. If you have any questions feel free to ask a member of the Admin team.

Retrieved from "https://camphalfbloodroleplay.fandom.com/wiki/Claiming:Camp/Donovan_Hyress?oldid=1461742"
Community content is available under CC-BY-SA unless otherwise noted.