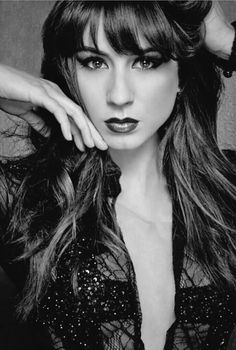 Personality: Eleanor is a hard worker and a perfectionist. Her mind is fuzzy and incomplete and if she's given a task or a puzzle she cannot stop until she finishes it. If she is unable to figure out said puzzle then she has been prone to loose sleep over it and be unable to let it go. Because of this, she has a tendency to be very jumpy and fidgety as well as, quite intentionally, forget the people she is talking too as she gets lost in her head. Another point of this is that she can be very harsh to people who irritate her and it is very difficult to actually find someone who can keep up with her.

Eleanor craves knowledge, though. She also has a photographic memory and is quick to memorise something but dislikes studying for it.

History: Her mother, Isabella, was nothing but a prostitute and sold her body to pay for a lousy apartment. She had a bleak expectation from life and never dreamed of anything more, losing her mind in a man or a bottle, sometimes a blunt. She was somewhat happy and satisfied with it. The only relationship she considered to be serious was a big drug dealer, who the streets called "Mozart", but they broke it off a few months later. Around the same time they were dating, though, Isabella had been hanging out at a bar when she met a man with long black hair. Assuming he wanted sex, she offered but he had declined and instead bought her a drink. For a few hours, they had begun to talk, despite both being quite withdrawn. After the night, still believing he was going to pull out a few notes she was surprised when he simply bid her goodnight and left.

The next night, she went there again as it was booming for her own business and found the same man sitting at the table. Again, he was by himself and, unlike last time, she tried to ignore him but he waved her over once more. Knowing full well this was losing her potential 'business associates' she was hesitant but eventually was persuaded to come over when he waved his wallet. Like last night, he simply bought drinks and talked to her. She wasn't a mean person and, though she didn't like to admit it, did find his company intriguing enough to spend a few hours with him.

This pattern continued for a week until, finally, they were in bed with each other, his wallet forgotten.

When she woke up, he was gone but she wasn't bothered by this. Some of her clients did this even though he wasn't one, she expected to see him the night like she had done the previous ones.

Except she was wrong and never saw him again.

She had broken up with the boyfriend during this week and though she wasn't heartbroken over the disappearance, she was hurt.

Life continued as normal for Bella until three months later when she realised she was pregnant. She was tempted to have an abortion as she didn't have a life to support a child but her own morals forbade her from doing so and six months later she had a baby girl in her arms. Unable to provide for the baby as well as keep up her job she eventually became homeless as she wasn't able to pay rent money. Moving from suburb to suburb, this continued for three years as they scavenged for food. One day, she walked into a bar, Eleanor attached to her and her ex is across the bar staring at them, and more specifically Elle.

Her ex had done nearly every crime in the book and was feared across the undergrounds. He lived by two rules:

1) Don't care for anyone. They'll tear you down.

But, even though he knew Elle wasn't his child as he had flaming red hair and she didn't look like him, he faked it and told Bella that she was his. Despite the first rule, he believed that he might be able to repent for some of his sins by giving the girl a home. Taking Eleanor was easy, as Bella never particularly loved her daughter and had considered leaving her in front of a church or something similar times and the ex, whose name was Jordyn, gave her some money and drugs in return.

For the next few years, Eleanor was happy. She was raised by Jordyn and considered him family and didn't remember Bella or cared enough to try and find her. Severely kept in the dark about what her father's career was like, she became known as Mozart's daughter and people knew well enough to stay away from her.

When she turned nine, she was on a road trip with her father and was left alone in the car as he went to pay for the petrol. As this was occurring, a hell hound had sniffed her out and became eager to slaughter her. Eleanor had been outside of the car to stretch her legs and was far enough from the car to not dive back in when she noticed the hellhound.  Not knowing what else to do, she tried to run back to the car but tripped on her way and would have most likely died if it weren't for Jordyn. Jordyn was a son of Hermes and that's why he was so skilled at his job but was aware of the world around him and was able to kill the hellhound.

Visibly shake, Jordyn hurriedly drove away from the scene in fear that the owners would call the police on them. Knowing full well that she was a demigod, he decided that night that he would have had an easier childhood if he had been told who he was and didn't want to put her through his own experiences. Telling her who she was, he gave her the option of trying to find camp but she said no. She didn't want to leave him.

For the next four years, she spent her time split between school and learning how to fight from her father. Her father employed some of his underdogs, both children of Ares, to teach her alongside him and keep her out of trouble. At school, she kept to herself as she found no need to interact with them and preferred to use school as a time for herself as at home it was rare to find peace. She had seen a few monsters from afar, some bigger ones grew tempted to try the small group but the children of Ares, and sometimes Jordyn, easily dispatched them and Elle never had to be bothered in fighting them herself. She never really strayed far from her house, and when she did she often had the two other demigods with her that killed any monsters that came their way. This happened mutliple times but since she was always pushed to the back, she never did have to lift a finger to kill the monsters.

She was twelve the next time she saw a monster that had evaded the other demigods. She was at school and a substitute teacher had come to make up for a class. The teacher constantly stared at her, always picking her out for answers. Afterwards, Eleanor always saw her around and saw her hovering in the back of the room whenever she looked up. Eventually, the teacher took her a room by herself. She began to foam at the mouth and soon she revealed herself to be an empousai. Having been taught what monsters are and what some look like, she was familiar with what it was and instantly took out her sword, despite being terrified to her bones. The empousai lunged and she darted backwards, pushing piles of vials into her way as they were in a science room and the glass shattered onto her. With this distraction, she managed to kill the empousai. Due to the school damage that she caused, and since the mortals didn't recognise the teacher's existence, they expelled her from the school but she was soon able to go to another one.

The next attack happened when she was fifteen. She had snuck out for some party and was heading over to it. She felt like she could handle an attack and doubted it would even happen. She was wrong. It was dark and the street was deserted. Eventually, a large noise happened behind her and she turned around, hands going to a dagger her father had given her. Like her gut feeling has suspected, a monster was behind her. This time, it was some sort of scorpion that lashed out at her. A fight soon broke out and she barely survived but after ten minutes, dripping with blood she was able to kill the scorpion. She returned home straight away, deciding not to tell Jordyn about the incident.

When she was sixteen, a boy at school began to talk to her. She brushed him off at first but he was insistent. After a few months, she saw his legs. He wasn't human, he was a satyr. Confronting him, he told her about the camp as he expected her to be unaware of this. When asking her to come with him, she instantly said no and completely avoiding him afterwards as she still didn't want to leave her father.

A few weeks later, her father's business got rocky and a rival decided it was time to get rid of him. By doing this, he tried to make him snap by targeting Eleanor. When she was walking, a group of home sped past shooting her in the stomach. She was only a few meters away from her home which allowed her father to take her to the hospital. He was infuriated, though, and he tried to kill the rival. The rival was expecting this and the police stopped him. He was charged with attempted murder and was given a life sentence.

Faced with the options of foster care and camp, she searched for the satyr and travelled to camp.

Yoooooooooooooooooooooooooooooo just one comment and that is two demigods would attact more monster so even if 9 is a very good age for a big 3 child. please note that the parent is a demigod themselves so he might attract monsters 'unknowingly' and one of these monster would find Eleanor. (however so your free to argue your case cause i'm interested to hear your argument on this). Also how long was she in camp? please do explain cause you know we have a two week rule and I would really like to keep it at that

Hey :) I've changed the age at the top so she arrives at camp at 16. For the other part, I've editted a reason in.

Well, guess it's obvious that she was protected during the years she didn't fight a monster herself ;)

This claim has been approved as a daughter of Hades. You now need to make a page for them and a word bubble, if you aren't sure how to do this you can see the guide here. Once you have done that you can add your character's name to the cabin list located on the cabin pages and start role playing with your new character. If you have any questions feel free to ask a member of the Admin team.

Retrieved from "https://camphalfbloodroleplay.fandom.com/wiki/Claiming:Camp/Eleanor_Jebediah?oldid=1781077"
Community content is available under CC-BY-SA unless otherwise noted.