Personality Electra is brave, ambitious, adventurous and forceful. She is also b*tchy at times, as well as detached and dishonest. She is materialistic, moody and Imaginative. She is a Pathological Liar. 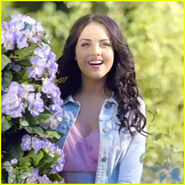 History Electra Bennett was born on March 17th, 1996 to Sam Bennett and (goddess). Sam and (goddess) met in his hometown of Brantford, Ontario while watching the full moon. They instantly felt an attraction to one another, and ended up having a One Night Stand. 9 months later, a baby in a golden cradle was outside his door with a note. It explained that this was his baby, and he should take care of her. He did, with the help of his mom.

Sam and his mother's relationship was weird, in Electra's eyes at least. They were always too close for comfort, and even slept in the same bedroom. Her grandmother said that what happens in that home, stayed in that home. So, when the police had come to ask questions after a neighbor's complaint, Electra lied to them, and, continued to lie, up until she was 10. Then, the police finally caught Sam and his mother in the act, so, the put Electra in Foster Care. She, however, was so comfortable with lying, she lied through several Foster Homes.

Her first monster attack came when she was 14. She was walking through the forest at night, when a hellhound jumped her. She managed to fend it off with a knife she was keeping for 'emergencies' but, that didn't keep it off for long, after realizing the knife could do no harm to it. She managed to flee the seen, but, only after going through a river, a pond and up a tree was she able to lose it.

The same thing happened the following few years, and, each time she ran, and, somehow ended up in a tree. However, on her 17th birthday, she decided to hitch-hike to a bigger, more exciting place. New York, New York. So, she hitch-hiked her way there. However, while she was there, she ran into a satyr, who was looking for Demigods to take to Camp. He, then took her to Camp, where she got her weapons, an axe, and a few daggers.

Weapons/Stuff An axe, and a few daggers

{{How did she fend off the hellhound for the elotated amount of time?

Please add her to the user/characters forum, thanks :)

This claim has been approved as a child of Pandia. You now need to make a page for them and a word bubble, if you aren't sure how to do this you can see the guide here. Once you have done that you can add your character's name to the cabin list located on the cabin pages and start role playing with your new character. If you have any questions feel free to ask a member of the Admin team.

Retrieved from "https://camphalfbloodroleplay.fandom.com/wiki/Claiming:Camp/Electra_Bennett?oldid=1220778"
Community content is available under CC-BY-SA unless otherwise noted.