Appearance: Leo stands at 5'8" and is well built. She has shoulder-length brown hair, and hazel eyes. 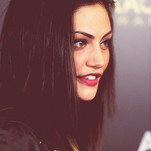 Personality: Leo is stubborn, arrogant and mischievous. She is also reckless and quite a bit rebellious. She is capable of a bad, explosive temper when angered, which she has always tried her best to control. Despite all that, Leo is true-hearted and brave, willing to do anything to protect the people she loves. She has a witty, sarcastic kind of humor and has a love for pranks.

I realize now, that for years and years I had wished that I was never born. I didn’t really express that wish before Ethan’s death, because when he was gone I thought that I would be better off not existing at all, than live like this.

But I’m getting ahead of myself. I should tell you this story properly.

It all started when Henry Blackwater, my father, met Margo Fay, a mysterious brunette with misty grey eyes. It was in 1994, six years after he married Andrea Lloyd, and five years after my brother Elijah was born.

They met when Henry (well, his driver) almost hit her while she was crossing the street. Normally in a situation like that one, he would have the driver apologize and give her some money so she could leave in peace, but something about her captured his attention. He asked her out to dinner, to make up for her “almost death”, as he put it.

After that, they hit it off. It was the one and only time Henry’s cold heart warmed up, the only time he smiled. But then she left. She left randomly, about two months after they met, without saying a word, without leaving anything behind her. To say that she broke his heart would be little.

He went back to living his boring, yet so privileged life. He knew that he would never forget her. But he didn’t realize that she knew too. Margo was kind. So, when she gave birth to a baby girl some months later, instead of just giving him the child, she altered the mist, so that he forgot all about her and so that the whole world, including his wife Andrea, would think that the child was simply the family’s second kid.

Oh, right. I forgot to tell you that Margo Fay was in reality the Greek goddess Pandia. My bad. And also that that child was- is, me. Elinor Blackwater. But call me Leo.

Anyway, that’s how I came around. I grew up in the Blackwater Manor, always knowing deep inside that something was wrong with all of this. I think that Henry and Andrea always felt it, too. Gods, especially Andrea. The thing about her is that she was and always will be a queen bitch. The only thing she ever cared about was money. Oh, and her son Elijah.

Speaking of whom, Elijah was the only person that cared about me. Dad was always too busy playing golf or poker or something like that with the other ignorant patriarchs of rich families, and Andrea never showed me any love, really. In short, even though I could have anything my heart desired, my childhood was pretty f*cked up. Imagine growing back in a world that killing and manipulating people was acceptable, for the sake of “the family”. Like I said, pretty f*cked up.

When I was twelve, along with one of my bodyguards, Cedric, was sent to a boarding school for other rich kiddies just like me located in Switzerland. That was where I made my first friends, Jason McLeod, Ryan Adams, Misha Arseniev and Ethan Chase. As far as I was concerned, they were the best people in the world. Most of them were put in the school because of scholarships and were pretty poor, but I didn’t care a single bit. They accepted me, they treated me like an equal, even though I was a year younger and a girl. It was great. Until I got kicked out (expelled being the politically correct term) about three years later.

I won’t bore you with the details. The point is that I was sent back to a furious Andrea and a disappointed Henry, and they shipped me off to another boarding school, this time in France, as soon as they could. The Primrose Academy for Girls was pretty neat. I never made any real friends there, but I didn’t really mind because I had the guys.

When I came home for the summer holidays that year, I just turned 16, my pretty little family announced that they wanted me to marry Jonathan Grayson, the heir of a large law firm. As you probably realize, I wasn’t too excited for that. I wasn’t excited at all, per se. So, when I found out about the “engagement dinner” that I was supposed to attend a few weeks later, I decided to run away. And I did. I met up with the boys in New York, they all had graduated at that point, and were trying to get their band known.

That night, I learned about Ethan’s drug addiction. I did everything in my power to help him, along with the rest of the boys. Somewhere in the middle of putting him into rehab and sneaking out every night to go visit him, we fell in love, and they became famous. We managed to get Ethan somewhat clean. I rented an apartment in New York for Ethan. I wasn't aware of Cedric (the bodyguard guy, remember?) following even when I thought he lost me, but surprisingly he didn't say anything to my parents.

In general, all was well.

The one thing I’ve learned in my life is that when “all is well”, said all will soon come crushing down. And so it did.

Elijah found out about Ethan. When you're a Blackwater, everyone that knows your parents knows you and they notice you, mostly when you're doing something the rest of the Blackwaters wouldn't approve. Someone, I still haven't found out who it was, saw Ethan and I together, and ratted us out to my brother.

Apparently, he was still angry at me for running away from that almost engagement, because Jonathan’s family broke the whole thing off as soon as they found out. I never thought that my loving brother, my favorite person in the world, would become like our father, but he did. As soon as he found out, he hired someone to kill my boyfriend. And he didn’t even try to hide the fact that it was him! He just walked up to me and handed me some photographs with Ethan’s dead body and said that I should find someone better for me, next time.

For the next two months, I was miserable. I didn’t even leave my room. I mourned the loss of the one person that made me feel like home. Until one day, I decided I had enough. I had had enough of this messed up family, of their pretentious world full of courtesies and back-stabbing. I packed my stuff, and run away.

But before I did that, I stole some money for my daddy’s study. And I also came upon a very interesting letter, addressed to me, from Margo Fay. That’s how I found out the truth about who I was. A demigod. A daughter of a goddess. That was weird.

When I finally left that damned house, I went straight to the apartment I had rented in NY. Soon enough, the monsters came. By some strange coincidence, Cedric showed up and saved me. Turns out, the weird I-guard-you-but-don't-tell-your-parents-about-what-they-don't-need-to-know guy was sent by my real mother's father Zeus (does that make him my grandfather?) to protect me from monster attacks all these years. He sent me straight to Camp Half Blood.

Possessions/Weapons: A CB sword she found waiting for her in her room in Pandia's Cabin.

Just a reminder. You have three days to finish this. Take your time. I've got forever to wait -Demi ღ

How did she get to 16 without any monster attacks. Correct me if I'm wrong but when she ran away the first time, she stayed in New York, right? How did Elijah find out about Ethan? When, or rather, after Ethan was killed, she returned to her family's mansion/house, correct? How did she fight off the monsters that came for her? Lastly, what age was she when she arrived at Camp? Take your time. I've got forever to wait -Demi ღ

Tried my best to fix it. To answer your questions:

There you go. Basically, if I didn't explain it enough in the story, Pandia made a deal with Zeus to send one of his sons, Cedric Glenister to protect Leo from monsters, until she got to Camp. NickiWilliams (talk) 13:35, June 17, 2013 (UTC)

This claim has been approved as a child of Pandia. You now need to make a page for them and a word bubble, if you aren't sure how to do this you can see the guide here. Once you have done that you can add your character's name to the cabin list located on the cabin pages and start role playing with your new character. If you have any questions feel free to ask a member of the Admin team.

Retrieved from "https://camphalfbloodroleplay.fandom.com/wiki/Claiming:Camp/Elinor_Blackwater?oldid=1220780"
Community content is available under CC-BY-SA unless otherwise noted.