Appearance: Elixabeth is tall and slender with flowing red hair that is always left untied. She always likes to wear long flowing dresses which make her feel at home in the wind. 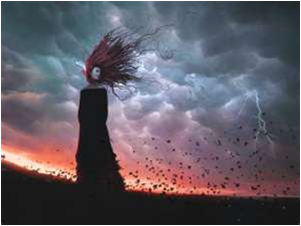 Personality: Elixabeth is not a shy person but she keeps to herself because of the horrible tragedy she has endured. Because of her survival, she is extremely pious and can often be seen strolling while the East Wind is blowing offering prayers to her father.

History: Elixabeth lived most of her life in a small fishing town in Norway. There wasn't much to do in the town but Elixabeth loved nothing more than joining her father on fishing trips and enjoying the breezes blowing over the ocean. When she turned 16, her family went on a fishing trip. A massive storm brewed as they were making their way home and their ship was shattered and her parents killed. Elixabeth clung desparetely onto a plank of wood and her noble father the God of the East Wind kept her afloat until she was picked up by a friendly steamer on its way to Long Island in New York. She wandered helplessly around Long Island for a few days but eventually started wandering down a road that seemed to emanate destiny for her. Suddenly as she was wandering down the road she was attacked by a huge creature of the likes she had never seen before, a Hell Hound. She valiantly tried to fight it with the limited abilities she had but its power was far too great. It would have been the hend of what could have been a great heroine but for the heroicness of a camper who had happened to be on his way back to camp from the holidays. His name was Marius and he was a son of Zeus. He bravely fought off the Hell Hound and brought Elixabeth to camp. When she woke up she was accepted with open arms and has found home there but she still pines greatly for the world she has lost.

Weapons: Her only weapon is the long harpoon she was given by her father on her 15th birthday. She has embellished and modified it into a weapon of war and coated the tip in celestial bronze. The harpoon turns into a large brooch when not in use.

My only issue with this, is regardless of having fish to catch, she would not survive on the ocean for that long, she needs fresh water to live, more than she needs food, you would die within a few days to a week without a supply of fresh water.--BachLynn(Send an Owl!) 16:04, November 24, 2011 (UTC)

Ok, from what I can tell, she's still adrift in a salt water ocean, clinging to a plank of wood, what is she using to fish with, and if it's a year out on the ocean, again, with no fresh water to drink, after a week or two at best, she'd die of dehydration, no way she'd survive a year, and drinking salt ocean water would actually dehydrate her faster.BachLynn(Send an Owl!) 04:27, November 25, 2011 (UTC)

Well, how long she 'wandered helplessly around Long Island' until she reached the Camp's Shore? Queen.Bee(Your Highness here!) 07:07, November 25, 2011 (UTC)

This claim has been approved as a child of Eurus. You now need to make a page for them and a word bubble, if you aren't sure how to do this you can see the guide here. Once you have done that you can add your character's name to the cabin list located on the cabin pages and start role playing with your new character. If you have any questions feel free to ask a member of the Admin team.

Retrieved from "https://camphalfbloodroleplay.fandom.com/wiki/Claiming:Camp/Elixabeth_Oslo?oldid=1220782"
Community content is available under CC-BY-SA unless otherwise noted.