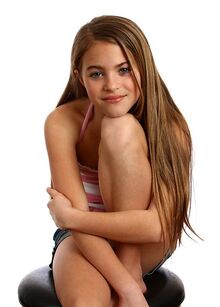 Personality: Elysium is a brave, respectful, loyal, funny, and adventurous. She is very sporty and enjoys to read, even though it is difficult. She loves the outdoors and adores nature. She tends to be peaceful, but isn't afraid to swing a sword in order to defend herself and her loved ones. Her fatal flaw is her adventurous trait because it also makes her curious and daring to do things that may be dangerous.

Current Age: 12 (Turned a week after her arrival at camp)

Abigail Nightshade was a young woman in her early 20s(over 21). One day, she was at the bar drinking a few drinks and getting drunk when a man approached her and started to flirt with her. After a few minutes of talking and flirting, the man kissed her and being drunk, she kissed back. Then it turned into a makeout session, and well, I think you can guess the rest.

Nine months later, Elysium was born, but Abigail did not want nor was prepared to raise a child on her own, so she decided to put her up for adoption.

Damian Pride, a young, clear sighted man in his early 30s, saw Elysium on the adoption list and had a feeling that Elysium was something special, so he took her in and raised her as her child. Damian couldn't help but smile when Elysium showed up at his door with the adoption lady. He almost immediately fell in love with her as she looked at him and laughed when he slipped on the tile floor. He named her Elysium because of her cheerfullness and loving character.

He hired tutors for her and wanted the best for her, so he took her to amusement parks and different events like plays, baseball games, dances, and a lot more other places. When she was ten, he began to teach her how to defend herself and how to use a gun and sword. He thought that by teaching her those things, he wouldn't have to worry as much when she wanted to go out by herself. When she was nine, he taught her what to do if she ever got lost, and he also taught her survival skills like how to light a fire, how to tell what food is edible, ect.

Her father also gave her a bronze sword that he had found on his bed one morning with a note that said For Elysium -her father. When Elysium was 11, her father died in a severe car accident. She was also in her first monster attack with a hellhound. When the hellhound charged at her, she used her instincts and stabbed the hellhound with the sword, it whimpered and when she hit it a second time, it dissolved. She saw a goat man in the distance who seemed to be watching her.

Three days later, there was another attack, this time by a harpy. This time, the goat man played a set of pipe reeds and vines wrapped around the harpy's legs and pulled it down. Then, Elysium stabbed it with the sword and it dissolved. The goat man started to explain to her about the Greek mythologies and how they were real. He explained how he was her protector and about camp. She nodded and said that she believed him, but didn't mention the dream about her father telling her about this. She followed him to the big hill that was apparently called Half-Blood Hill because of a girl named Thalia sacrificing herself about a decade or two back. On the way there however, one of the furies attacked with two hellhounds. The goat man played his pipes again, this time the hellhounds got buried under tree roots and the fury was pulled down. The goat man ordered her to run passed the big tree, and Elysium did. She looked back and saw that the fury had escaped and killed the goat man. Elysium crossed the border and was claimed by Zeus.

Please elaborate more on Elysium's personality (should be about a paragraph)

Umm, That girl is def not 12 o.o. At least 15 maybe. So please change the model. Who was that man? What Happened to him? Why would she be able to know how to use a gun O.O? I don't think 8 years olds can use guns...Why did she get a sword? He can't just "assume" that he thinks its for her. How did Elysium live when her father died? Don't add in all the quest stuff until she is made and has to DO the quest.

Really? I know a friend who looked kind of like that when she was 12.

I think only one day between attacks is a little much.

I don't know. She is a daughter of the Big Three, so she's more prone to having attacks, especially after the first one.

Honestly tho, that model looks like she is 15-17. Somewhere in that range... Please find a new one

"I should probably add that Damien is a clear sighted mortal too". This is an out of character line. Please change it so that it flows along with her history. Other than that, everything else looks fine. :)

Retrieved from "https://camphalfbloodroleplay.fandom.com/wiki/Claiming:Camp/Elysium_Pride?oldid=1365309"
Community content is available under CC-BY-SA unless otherwise noted.