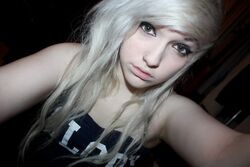 Personality: Emma is a free spirited girl. Shes a bit of a rude girl. Being 13, she can't take care of her siblings so they take care of her. She is a smart-a*s according to her big brother Oren, but she doesn't care. Her favorite sibling is her sister, Moony

History: A few years after Sophie and Oren were born, Nicholas met Athena. Athena was a pretty woman. She was walking from the library holding a stack of books about various things when she tripped on the sidewalk. The pavement caught the books and she fell to the floor. She muttered something like "I hate Canada". She then started to get up when Nicholas came over and helped her pick up her books. Nicholas introduced himself and held out his hand to help her up. Athena took his hand and got up, taking her books from Nicholas' other hand. Nicholas was glad to meet Athena.

Athena stayed in Canada for 2 months when she finally presented Nicholas with Emma. Emma was born from Athena's head as Athena was born from Zeus' head. Nicholas had to manage to take care of Emma on his own. Until he met Amity Gold, a very pretty woman. Amity was a mortal who saw through the mist. Amity could see things in the future, people called her a see-er. She saw Emma's future as a huntress. Amity married Nicholas and pretended Emma was her own, Emma grew up thinking Amity was her mom. He was shocked but he left it alone until Emma was older.

During Emma's younger years, she was a hyper active child. When she was 3, her parents brought her to a doctor and she was diagnosed as ADHD. She was also diagnosed with Dyslexia,a trouble with reading. She was good in school, but she got worse, grades dropping and all. Her parents were concerned. As Emma got older, she saw strange things. She was attacked by a hellhound at age 13. A hunter of Artemis killed the hellhound and Emma's Sister Moony was shocked. The hunter told them everything. Moony just nodded the hunter brought them to their dad and their dad told them to go to camp.

The hunter did not want Emma to go to camp so she asked her to join the hunt. Emma asked what would happen. The hunter told her all of the perks and the cons of being a hunter. Emma finally decided. She wanted to be a hunter, under the condition of staying at camp with her siblings. She said the pledge and Artemis accepted. She was a hunter. The other hunter gave her a bow and sheath of arrows.

Weapons: Her bow and arrow

I can see your toner through those jeans -Izzy

Please elaborate why Hera would even visit themThere is a crime, but no criminal. ★❣Broken❣★

Fixed Finchel is obviously 4ever, even if hes gone

This claim has been approved as hunter of Artemis. You now need to make a page for them and a word bubble, if you aren't sure how to do this you can see the guide here. Once you have done that you can add your character's name to the cabin list located on the cabin pages and start role playing with your new character. If you have any questions feel free to ask a member of the Admin team.