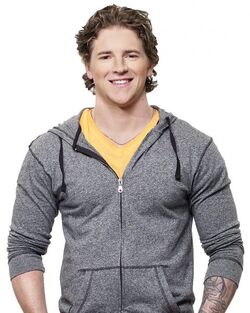 Personality: Emmett is a strong-willed, country boy with a love for fighting, wrestling, or anything that can inflict damage on someone. Despite his seemingly hard attitude he can be caring when he wants, usually only towards friends and family. Emmett tends to be a bit head strong as well, always thinking he is better than most.

History: Todd Hall was working late one night at a local bar, when a young woman had approached him, they began to talk, and soon Todd and the lady went to his house. Soon they ended up in bed together, and when Todd woke up, only a letter was beside him. The letter read as followed:"Dear Todd, I am sorry I had to leave on such short notice, and I know that you probably will forget about me soon, so I just wanted to say goodbye, one final time. -Demeter"

One thought came to mind when he read the note, was it the goddess Demeter? He really didn't know who else it could be. Nine months later a basket arrived with a little baby girl inside, with the yet another letter:"Todd, please take good care of our child. -Demeter". Still confused he took the baby inside, and named her Sierra. Soon at the ae of 12 Sierra had gotten attacked by a hellhound, and brought to Camp Half-Blood by a satyr.

When Sierra turned 20 she went to a small university in Nova Scotia. Where she met a young man who at first, she hated, he always dressed like a biker, and looked like he would beat you up just for staring at you. But soon she fell in love with him, and the two went on a date. Sierra didn't really feel a connection afterwards but, soon when the man asked her on yet another date, she said yes, but this time it ended with them in bed together. The next morning there was a letter, just like the one Sierra's father gotten, except at the end, instead of the name saying Demeter, it said Ares/Notus/Prometheus.

Nine months later Sierra gave birth to a beautiful baby boy, who she named Emmett. He was her pride and joy, and she did everything for him. Emmett grew up living on the family farm in Nova Scotia and at the age of 5 had a love for farming, and play fighting with fake swords.

Soon at the age of 12 while Emmett was walking home from a soccer game with two friends, when a large man began to follow them. Emmett realized he had been following them for probably two blocks now, and he soon glanced behind him and noticed the man only had one eye. Shocked Emmett ran into a nearby story and left his friends. With the store clerk no where to be seen, Emmett ran to the back of the store and hid in a storage room, when he heard a smash and saw the cyclops walk into the room, right when the cyclops was about to attack Emmett, an arrow came flying through a window and lodged itself into the neck of the cyclops. Emmett quickly ran out of the store through the back door, never telling his mother, little did he know, she was the one who killed the cyclops.

The next four years went okay, do to Emmett and Sierra moving around a lot for Sierra's job. They ended up moving to New York with his mother Sierra, well in the way there, something leaped out in front of them and the vehicle flipped. Sierra knowing it was in fact a hellhound, quickly grabbed a hair pin and it turned into a spear, with her many years of training at Camp Half-Blood, she managed to throw the spear and have it hit the hellhound directly. But what she didn't know was that another one witnessed this and attacked Sierra, killing her. Emmett with no training whats so ever, grabbed the spear and throw it. It was not even close to the hellhound, and when Emmett ran to grab the spear, the hellhound tackled him, but with one wrong leap, found the tip of the spear lodged into its chest. Soon Sierra's father took Emmett in, not taking him to camp right away as he never knew he originally got attacked, and within two years, took Emmett to Camp Half-Blood, following the map he used to take Sierra to camp. When they reached the camp at age 18, Emmett was claimed by Ares/Notus/Prometheus, and his mothers spear showed up into his hoodie pocket, in the form of a ring.


Kindly sign this with four tildes (~). Kindly add more to Sierra's childhood and teenage years. Where did the arrow come from? What age was he when he came to camp? Why wasn't Emmett brought to camp directly after the hellhound incident?

Oops I forgot to sign it, and as for the rest, I think I fixed them, but must I add to Sierra's childhood, considering she really isn't the main focus?

This claim has been approved as a child of Ares. You now need to make a page for them and a word bubble, if you aren't sure how to do this you can see the guide here. Once you have done that you can add your character's name to the cabin list located on the cabin pages and start role playing with your new character. If you have any questions feel free to ask a member of the Admin team.

Please add him to the user/char forum, pretty please, I'll give you cookies :)

Retrieved from "https://camphalfbloodroleplay.fandom.com/wiki/Claiming:Camp/Emmett_Howell?oldid=1220866"
Community content is available under CC-BY-SA unless otherwise noted.