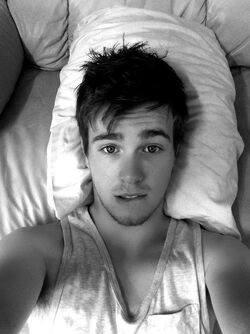 Personality: Ernest is a really nice, kinda and generous. He loves every one and everything. He loves making friends and loves meeting strangers. He usually is pretty quite and keeps out of trouble. He's always pretty up beat, but at some occasions falls into deep depression.

Christopher was a very rich man and a professor at Oxford University. He had inherited his wealth from his now deceased father and mother. They were both very powerful people and had gained there money playing the stock market and working hard. He was head of Mythology and was very happy with this job. He enjoyed Greek, Anglo-Saxon, Celtic and most European countries. But he liked to also dabble in Native American and South American Mythology.

He was invited by Yale to work there for a year. He happily went as he wanted to, first hand grasp American life. Later that month he flew out. A month later, Christopher gave a large amount of money to a charity. As a thank you, the head of the charity went over to thank Christopher. She was a fair haired, blue eyed woman, standing at approx 5'6". Christopher fell head over heels for her, and because of this carried on donating to the charity. After some weeks of this he finally asked her on a date. The date went well and they retired back to his place. That night they slept together.

In the morning she had left. This broke Christopher's heart, and he tried to phone the charity but they no longer seemed to exist. It was like it had just vanished into thin air. He was heart broken for months, till one day a basket was left by his door. It was a baby boy, and with him came a letter, telling him that when the boy was 15 that he should be sent to Camp Half-Blood, Half-Blood Hill, Farm Road 3.141, Long Island, New York 11954.

Ernest grew up in a very happy child hood and went to the best schools. He was a pretty smart kid so he was always put in top sets. He wasn't the most loved kid at his school, and didn't make a lot of friends. But people looked up to him because of his kindness and up beat attitude. He wasn't really a talkative person and preferred to watch and wait that talk ad fight.

When Ernest was 7, his father died from a heart attack. This drove Ernest into a small, dark depression that loomed in his heart like a let bullet, but he carried on smiling. He carried on smiling his fake smiles. The sorrow never fully left his heart, it's still there to this day waiting for the right time to spit Ernest. He was sent to live with his aunt and uncle and the letter was lost. Lost in the boxes and boxes of Christopher's things. Never to see the light of day again.

He never really liked his aunt and uncle, it wasn't the same as with his dad. But he couldn't do anything about it, so he moved on. After he some years of this, he graduated Middle School and moved on too High School. At about this time, he was walking back from town where he had just gone for a drink with some friends. So he was walking back, a can of coke in his hand and a large dog seemed to follow him. Ernest didn't even like dogs so this freaked him out, so he started to walk faster. The dog, again followed running this time. He ran into an ally, blinded and confused by fear. "Dead-end. I'm going to die. It's going to kill me" These are the thoughts that sped through his head as the beast came closer. He his his face in his palms crying. He heard the beast growl and it's feet touching the ground as it supported that large body. As he hid, cowering in fear an arrow impaled the hell hound and it exploded into dust.

The sudden silence confused Ernest. The ragged breathing of the beast couldn't be heard. He looked up and saw what seemed like a gold arrow lying on the ground, covered in what seemed to be gold dust. Ernest searched the rooftops, trying to locate who had shot the arrow and saved him. He didn't see anyone on the roofs and was about to give up when he saw a woman. She appeared to be around 15 or 16, wearing a silver jacket over a white shirt, silvery camo-pants and black combat boots. She seemed to have been staring at Ernest for a while before shrugging to herself and walking away. Little did Ernest know that the woman who helped him was actually a Hunter of Artemis who was previously a mortal. Since mortals had no way of knowing when a demigod was near, the Hunter just shrugged Ernest off as a simple mortal boy.

Ernest stood there baffled for a long while. Trying to piece together what had just occurred. But it seemed, to him that this was to hard to solve and thus he left.

When Ernest was about 15, he was walking in school and outside was a tall man wearing a large black trench coat. Ernest seemed to be lured towards him, and so he left to school and went to the car park. The mad seemed to growl at Ernest as he came closer. He seemed to be standing at 6'8 and had large shoulders. Ernest walked closer and closer till he was standing some 5 feet infront of the man. As Ernest took steps closer the school bell rang. Hundreds of kids swarrmed out of the classes and onto the yard. The man gave a large angry grunt and Ernest turned to see the kids leaving the building. When he turned around, the tall man had gone.

About 1 year after Ernest was watching TV when he heard loud barking sounds coming from outside. He look out of his bed room window. This dog was hug, at least as large as a small car. The thing growled at him, droop leaving its large teeth. What seemed odd to Ernest is that the rest of the people kept on walking, as if this was a normal thing. Ernest shouted at the dog, and the pedestrian looked at him strangely. He felt awkward and so he hid back in his room. He tried to sleep it off and when he awoke the dog was gone. Later that day, while his aunt and uncle was out he was just about to leave the house when the dog jumped him. He feel to the ground in pain. The dog bite at him it's claws digging deep into Ernest's shoulders. Just before Ernest blacked out he heard the sound of tired skidding on the road. The car parked right next to him and a satyr hopped out and stabbed the dog with a spear. He then pulled Ernest into the car and drove off to Camp Half-Blood.

Weapons & Possessions: Ernest has a collection of stuff, from teddies to games. He owns a rare purple DS and a large collection of games to go with it. He also own a Celestial Bronze Katana. This changes into a small Yale Pen. He also carries a ring, this has not special powers he just likes it.

It looks fine to me. Although, next time, do remember that you need 3 god choices :) (I forgot to mention that earlier >.<)

Retrieved from "https://camphalfbloodroleplay.fandom.com/wiki/Claiming:Camp/Ernest_Drake?oldid=1220876"
Community content is available under CC-BY-SA unless otherwise noted.