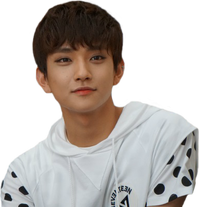 Personality: Since this is a massive thing, for the most part Ethan's quite shy and he doesn't like to talk much due to the fear of being isolated by the other person. If he does speak though, he is proven to be a loving friend who enjoys to joke often.

History: Living in Pyongyang, North Korea, infant Hong Ji-Soo and his family longed for a life of freedom and choice with a better standard of living. Ever since he could remember, there'd been talk of defecting to the south - moving to Seoul, Busan or Incheon - anywhere that wasn't the North's capital. They'd heard the stories, they knew the consequences; who didn't? Ji-Soo's parents had planned to defect when they met at the tender age of 17. Now both in their early thirties with an infant son, they knew for certain that they didn't want him to go through the strict lives they did. As a result of the extensive preparation of his parents, the family had a route mapped out. Like most defectors, they'd travel to China to which they'd go through in order to reach the Mongolian border. There, the Mongol government would - as they have done to defectors - offer an aeroplane ride to Seoul. When Ji-Soo was the age of 7, his family initiated it. They did well, up until the Mongolian border - Chinese officials had caught them and Ji-Soo's father sacrificed himself in order to let his wife and son make it over. The last the latter two heard about him, he'd been sent to a camp in Pyongyang and had died shortly after admittance.

Now in Seoul, Ji-Soo led a much better life and continued to uphold peace as the most important thing and it was at a rally for this that he met Harmonia. By looks alone, Ji-Soo wouldn't have been paid a second glance, however his charisma when talking was what attracted Harmonia the most - the strength and confidence behind his words and how he perfectly captivated his audiences' attention to deliver his message. The goddess accompanied him to a speech in Busan where twins between the two were conceived. Two weeks from Ji-Soo's talk, on 4th July 1998, Harmonia returned to the man and presented the two sons. With them, a note was enclosed that detailed all Ji-Soo would need to know. Half seeing as he had no choice, half because he could already tell he'd love them, Ji-Soo took in his sons and named them Kyu-Han and Kyu-Jae.

For the first few years of the twins' life, they travelled with their father from major cities throughout South Korea as he continued to preach about peace. It was on these journeys that he met his future wife, Seo-Yeon who - unlike him - was able to see through the mist; a trait that ran through her family. Eventually, when his children were 3, Ji-Soo settled in centre Seoul with Seo-Yeon who he married a year prior. There, Ji-Soo became a prominent member in the government's foreign affairs which enabled him to give his family a life of luxury.

Very early on in their relationship did Ji-Soo and Seo-Yeon discuss the twins' heritage and Seo-Yeon's ability to see through the mist. Mutually, they agreed that the latter would stay at home with the twins at all times as Ji-Soo could never be too protective of his boys - never wanting either of them to disappear. For most of their early childhood, the twins were protected and safe, until their 7th birthday. Kyu-Han and Kyu-Jae were very independent, even at their age and as such Ji-Soo let them (under some form of supervision) do near enough whatever they wanted. In a cliché sort of way, this trust was broken when Kyu-Han left to go to the park with some friends. Seeing as it was the local park near their home and that he was in a group of people, neither Ji-Soo nor Seo-Yeon thought anything of Kyu-Han going out. However, as the night darkened and no sign of Kyu-Han arose, prompting Ji-Soo and Seo-Yeon to contact the local police department. For the next week or so there were various investigations led by various detectives into Kyu-Han's location until it was eventually cited that he was kidnapped and taken to another country.

At first, Ji-Soo and Seo-Yeon were unsure on what to do - mostly because no details to which country had been given yet. With a gut feeling, however, Ji-Soo believed that Kyu-Han was in America somewhere and following a promotion, he relocated the family to Los Angeles, California and prompted each of them to change their names. He himself became Jonathan, Seo-Yeon became Lilly and their remaining son Kyu-Jae became Ethan. For the first few years, life was difficult for Ethan. Although he was never told upfront on why they left Seoul, he always knew it had something to do with his twin's disappearance and soon out of curiosity he began to wonder why his parents never told him. On top of this, he was enrolled in an elementary school with limited knowledge of the English language, causing him to be picked on by the other children which led him to isolating himself at the present and in the future.

However, when he was turning 10, Ethan found that his grip on the English language had tightened and he had more friends than he did previously. This surface happiness, however, was above the belief that his twin's disappearance was his fault. Obviously, as we know, there was little he could do about it but to Ethan, he thought that if he went with him that he'd still be there. These dwelling thoughts would be the first things that would eventually manifest into depression later on in Ethan's life. For the next three years, this thought would occupy Ethan's mind and would lead him to be more distant to his parents - leading them to focus more on finding Kyu-Han until Ethan became, essentially, an annoyance to them. This was why, when Ethan had his attack at 13, he was in a worse situation than if Lilly had helped him.

The incident itself happened on a lazy Sunday. Los Angeles life treated Ethan good and very often to escape the harshness of his mind he'd go to the beach and explore or go in the sea. On this particular day, Ethan walked along the coastline, scrambling rocks to high points and sitting on them. It was a routine for him and he was a self-proclaimed rock climber, however that day he felt like one of the rocks was watching him and his every movement. There was a tense atmosphere for a few minutes, Ethan perched just below it ready to leave if needed, before it pounced. Being an adolescent hellhound, it wasn't at it's full size, though it was big enough to send Ethan flying down a few rocks and hurting him severely. Hitting his head on a rock, Ethan fell into a concussion and would've been mauled by the hellhound if a rogue demigod hadn't been doing a round of the beach themselves.

A week or so later, Ethan awoke in the local hospital with his parents overlooking him - his father reciting the letter Harmonia had given him thirteen years prior. His father told him exactly what he was, exactly what his heritage was in an attempt to make him more aware and to protect him. For a short while, Ethan felt loved by his parents and felt like they were genuinely interested him. Alas, this came crashing down upon the family of three when it was revealed that Ethan suffered from depression. From that moment on, despite his parents offering him lessons with a demigod friend, Ethan continued to isolate himself from his family. They even made sure the demigod was with him around and on the year anniversary of his attack, hoping that if he was attacked, which he was, he'd be protected by the demigod, again, which he was.

A year before he came to Camp, Ethan's personality took another blow. Coming to terms with his sexuality, he dated a guy a year or so older than him who, at first, was loving and caring but over the course of the year, he turned to be abusive verbally and mentally. He often told Ethan he liked skinnier males which, paired with the depression, led Ethan to starve himself little by little until he was eventually diagnosed with anorexia. It was in this time that Ethan found that he enjoyed to draw on his arms - it'd started with self-harming but after the advice to change to something less destructive, he found that drawing in permanent marker released the feelings just as good. Mere days before his parents sent him to camp (sending him later than they should've as they saw no need with the demigod protector), Ethan was broken up with by his boyfriend for someone who was cited as being "the perfect boy" - only destroying Ethan's mentality further.

We went through the issues on Skype

Retrieved from "https://camphalfbloodroleplay.fandom.com/wiki/Claiming:Camp/Ethan_Hong?oldid=1598376"
Community content is available under CC-BY-SA unless otherwise noted.