Personality:
If there'd be one word to describe Fallon, it would be delusional. Most of the time, she's calm and stable but in extreme cases, she could be bipolar. Fallon is extremely stubborn and rebellious. Don't be fooled by her innocent guise, she can play her innocence almost too well. She considers a great library to be heaven and paradise. Reading is her only window to the world after being 'imprisoned' in a house most of the time. 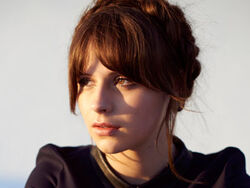 History:
My name is Fallon Adventine. 14 years old... or so they told me. My father's name is Andrew Adventine. I was born and raised in London, England. But my grandfather told me my real name was Fallon Cromwell. Dad's name was Philip Cromwell. Born and raised in Texas. Which is which? I'm confused. The only similarity? The usual question: who and where's my mother?

My grandfather told me I had a past life, one that I seemed to have forgotten. He told me my parents met in a museum in France. Dad, Philip Cromwell, was a historian doing some research there and eventually became a tourist guide for the museum for a short time. There, my parents fell in love and bore me when they settled in Texas. Mom left us almost too immediately. She died at childbirth. Although, Dad wasn't even there when I was born. They just said I was delivered by a nurse (which turned out to be a trusted nymph of my mother) at my father's doorstep. At that point, Dad couldn't move on and life seemed to become meaningless for him. Even if I entered his life.

Like all other kids out there, grandpa told me that I was raised normally in Texas but not by my father, but his brother. Yes, my uncle had to take care of me since dad is constantly drunk and all that jazz which made it dangerous for me to live with him. Dad disappeared from the world when I was seven. It's okay. I have no feelings for that man who abandoned me after mom died... or so they said. Then came the time when I actually saw it with my own eyes. At a party, my cousin killed a huge man right in front of me (actually, the man was right behind me but I turned to see him fall and disintegrate) with a knife. I almost contracted deliria at that moment. Her limping friend was yelling to let's get out of here. I was still confused at what was happening. I was eleven at that time and I began to see things inappropriate for my age such as a murder committed by my cousin. Then I began to see it clearly. The man whom my cousin killed was a cyclops, the one in myths.

Her friend began to tell me the entire truth about the what believed to be myths. And about a camp. I'm a demigod, cousin's a demigod, he's a satyr. I could've fainted. Before we ran off to this camp, we head off to my grandfather and bid him goodbye, told him and trusted him with the secrets and everything I saw. Then we came across Lotus Casino while on the run after so many monster attacks. That's the part where my memory starts to blur. Something about fighting a bunch of unfriendly demigods (BC) there too (inside the casino) after trying to recruit us while we were playing games. Before that, I actually heard them whispering to one another about their plans to crumple the 'gods' in ruins. They caused a distraction and I was dragged off outside the casino and I had no idea where my friends are. They injected me with a serum, it overworked, then, my memory was corrupted.

I was born and raised in London, England with my dad, Andrew Adventine, with love and care. Almost too much. They say I got out of the Casino after cuz and satyr fend them off. They told me I was babbling about my dad, Andrew Adventine. I couldn't remember much but he was waiting outside of the casino and took me to London. My cousin and the satyr were going insane that a random guy just took me and that's what put them to a foster home (which they escaped). But on this life, I was rebellious. He wouldn't let me out of the house. He homeschooled me, spoiled me with everything and had always been overprotective. I lived an almost too perfect life there. But there's one thing I didn't have yet - freedom. Although, it was quite weird living with him sometimes. Sometimes, when I arrive at school or at the middle of the night, there are weird crazy noises. Too tired, I didn't mind.

That's the point where they came back for me. Those crazy kids (cousin and satyr) went on a quest to find me after three years. At that point, I got attacked by a harpy but they managed to kill it easily with the girl's deadly spear. I didn't even hesitate to escape and run to this opportunity. And I was free. Monsters attacked us along the way until we reached camp. The girl told me parts of my past memories. We IM grandpa and uncle as well and they helped me regain my past memory. Painful ones.

But one question still remains: what role did my current father played? A BC ploy? Whatever it is, I'll figure it out soon.

What age was Fallon when she was attacked by the cyclops? Where exactly did Fallon and her cousin come from that they would come to pass by the Lotus Casino and how long did they stay in there? How did the BC know about their being in the Casino? Why did they have to alter her memories? IN he time when she was in London, did she encounter any other monsters? If yes, kindly give examples of them and how she fended them off. If not, how come she wasn't attacked? Did they ever arrive at Camp?

She wasn't attacked by the cyclops when she was 11. That was her cousin actually. Okay, I saw no idea how from Switzerland to Vegas so I changed Switzerland to Texas. They came across it when trying to get to camp. They stayed there for like a few weeks which resulted to, like months later. As for the BC, they're searching for new recruits that led them there. I added that Fallon heard their plans (dunno really just don't want to specify) so they had t alter her memories which overworked and corrupted it with new ones. And yep, they got attacked of course in London by a harpy which her cuz killed. And yea, they reached camp.

Hey Math. I asked around a bit in chat and I've decided to put Elle Fanning up for a vote, cause a few people recognised her. Just letting you know >.<

Well, if she's too recognisable, don't worry, I'll just change the model... um soon =) I just saw her name in Wattpad on the cast of a certain book (that's where I get a couple of models ^-^) and decided to make her as Fallon's model

Did Fallon ever get attacked other than the harpy when under the guardianship of Andrew? If not I feel like there should at least be one.

I was planning to get her on a quest someday and she'd discover Andrew would be a demigod that they were constantly attacked but Andrew was the one who fended off the monsters for her but of course, Fallon noticed the mess created from the battle. Fixed.

Check on this claim please?

This claim has been approved as a child of Mnemosyne. You now need to make a page for them and a word bubble, if you aren't sure how to do this you can see the guide here. Once you have done that you can add your character's name to the cabin list located on the cabin pages and start role playing with your new character. If you have any questions feel free to ask a member of the Admin team.

Retrieved from "https://camphalfbloodroleplay.fandom.com/wiki/Claiming:Camp/Fallon_Adventine?oldid=1229708"
Community content is available under CC-BY-SA unless otherwise noted.