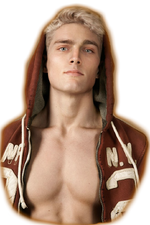 History:
It was in and about the Martinmas time, when my mother, Elizabella Donovan met my father, Boreas who was back then, introduced himself as Jack Harley. They met at a tavern, where my mother was working. A customer tried to touch her and rape her but my father came in time, rescuing her from the man. The two soon began dating, as my mother was grateful to him for saving her. They had an affair while they were drunk and my mother found out after weeks, that she was pregnant with me.

My father knew that he couldn't keep pretending for long and that he has to leave her soon. So, he decided to break her heart. When my mother told him about me, my father pretended he did not know her. He told him she was just a desperate woman, trying to get a hold of his money. Then, he left. My mother was terribly saddened. She decided to raise me well, cause after all, she greatly loved my father, and I am the only thing that reminds her of him.

We live at a small town at Ireland, with small population and rather small problems...or so I thought. The place was a monster nest. Wanna know why? Because lots of demigods live in it. Our neighbor's son, Rory is a son of Zeus and he disappeared when he was 11. Civilians told his mother he was swallowed whole by a wolf in the mountains. Truth was, he was killed by a Hellhound. Another one, a guy named Seamus who lives down the lane returned from Camp Half-Blood when he was 17. He was a son of Poseidon until multiple Harpies and a bunch of Cyclopes attacked him. They were more than he could handle so he died miserably.

The moment I found out I'm a demigod, I immediately wanted to leave the place. But my mother won't let me. She doesn't want me to leave her alone in our home. Wanna know how I knew I was a demigod? Well, a satyr friend of mine told me. He was my school mate, his name is Kenny.

I met Kenny when I was 14, when my first monster attacked me. It was an empousai, disguised as a hot chick living across the street. She flirted with me and I can say I almost fell for her trap. We were going to kiss when she suddenly bared her fangs and her eyes turned blood red. Then someone screamed, telling me to run, so I did. I dodged the monster's deadly talons. That someone threw a knife at me and told me to stab the empousai, so I did. The empousai disintegrated into dust. That someone turned out to be Kenny, resident satyr. He told me I wasn't safe anymore and that I have to go. Of course I was confused. I did't know what to do. My mom wouldn't let me go but I want to go. I was anxious that If I don't get to this "camp" soon, I would die. So, I decided to run away with Kenny. I wrote a letter to my mom and left when she was asleep. Kenny and I went to the harbor where we sneaked into a cargo ship leaving for New York City. We became stowaways.

Unfortunately, a deadly storm hit that night and their boat was caught in the middle of it. The ship lopsided and the two fell into the ocean. We tried to swim, looking for some of the rescue boats but we were attacked by Telkhines. Poor Kenny didn't make it through. I was lucky cause a veteran child of Poseidon saved me. He was old and he was training in the middle of the storm. He killed the Telkhines and brought me to his home in Pennsylvania.

He told me he was going to bring me to camp the next day. However, the old man didn't make it. I didn't know why but the next morning, I tried waking him up but he didn't. I decided to leave and find Camp on my own. The only thing I know is that it's at Long Island Sound, in New York. I took Celestial Bronze Warpikes from the old man's house, some supplies and decided to find that "camp" myself.

I had many close-calls with monsters but I managed to defeat them since only the small ones attacked me. A Hellhound, a Harpy and a Dracaenae respectively. It took me exactly three years to get to Camp. First, I didn't know where it was, second, I have no transportation and third, I get attacked by monsters alot. I lived through stealing at convenience stores, doing part-times to buy new clothes, supplies and stuff.

I was 17 when I finally got into camp. I was wandering through Long Island Sound and when I heard some thumping. I saw a Cyclops, running towards me. I ran away and I almost got killed but luckily, I was saved by a Camper who shot the Cyclops in the eye. He told me he was a son of Apollo and lead me to Camp. The moment I got there, I was claimed by Boreas.

Everything's almost good. 15's too old for a first monster attack, however. 14 is the oldest possible age for a half-blood's first attack. Take your time. I've got forever to wait -Demi ღ

This claim has been approved as child of Boreas. You now need to make a page for them and a word bubble, if you aren't sure how to do this you can see the guide here. Once you have done that you can add your character's name to the cabin list located on the cabin pages and start role playing with your new character. If you have any questions feel free to ask a member of the Admin team.

Retrieved from "https://camphalfbloodroleplay.fandom.com/wiki/Claiming:Camp/Fionn_Donovan?oldid=1792360"
Community content is available under CC-BY-SA unless otherwise noted.