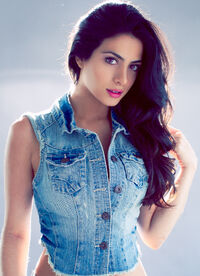 Gabrielle is typically a free-spirited person. Raised with a hard life made her stronger and sturdier through the years. She is an easy-going lady and generous, too. Her skills on directions leveled higher since she started to be a tour guide in an island. Music and the fresh breezes are the things that keeps her calm and steady, but she also sometimes run out of temper easily, showing it by throwing serious temper-tantrums anywhere she is. Gabrielle is good at dancing, modeling and singing, but she believes she sucks at all.

Enrique Javier got a job promotion from the company his was working at to the United States, where there were businessmen who wanted to hire him as their architect for a new building for their estate. Of course he took the offer and flew off to the States from El Salvador. There, he immediately met the guys hiring him and showed him the land where the building shall rise. They gave him days to examine the whole place, and so he did. While making runs in the area and building his designs, he asked a girl watching the renovations about something related to the place. The lady answered, and he thanked her, and stared—she was the most beautiful woman he'd seen. She introduced herself as Jace, a vacationist. He, too, introduced himself.

Sooner they became friends until his design was finished and was started by the engineers, with their relationship getting higher at a point where they turned out to be lovers. And indeed that fateful day came, and Jace leaving the next sunrise and did not come back. Enrique felt so heartbroken he didn't know what to do. To maybe lessen his problem, he flew back to El Salvador and kept himself calm, until after five months later. Going out of his house, he spotted a baby wrapped in a thick blue blanket on the steps, with nothing else but a bronze bracelet and a gold octagon-shaped, labyrinth-pendant necklace.

Gabrielle had a pretty good childhood then. Though diagnosed with dyslexia and ADHD, she still became the best student in her school. People loved her the way they loved her dad, too, who was very supportive. They were not very rich, and not poor, but still had a hard life. She started to work with her neighbours in farms, riding on carabaos as they plow the fields and throw the seeds while her dad was on job to support themselves. Everyone in their village was her friends, since they were living in a remote part of El Salvador, where only a small population was living in.

Through the years, she was happy with her dad, though financial problems really crossed the line. So she decided to stop schooling and went to go with agriculture in their place to earn more money. Fourteen she was then, too young to work, but did it for her and her dad. During their free times, they visit Tazumal, a Mayan archaeological site and admire the works of them. She went around the place asking the tour guides everytime, which got her to memorize the place more and more. She would then draw the whole place in her pad up the trees in their remote village, which is in between deep rivers and dense forests. Gabrielle then turned fifteen, but no signs of her being a demigod had shown yet. But her one more visit to Tazumal was a day she never had expected.

Gabrielle's dad was with the archaeologists visiting there, too, talking about the ruins and the Mayans themselves. Gabrielle ran around the place, feeling free as she kept the place more vivid in her mind. She then heard screeches and caws in the air when a feather-arrow from a Stymphalian bird missed its target. She looked up and saw a flock of them, gliding towards her. Panicked, she screamed and ran for the main building as more arrows rained down, causing parts of her arms' skin to cut and bleed. The rangers and guards there noticed it, though they only saw a huge flock of seagulls. Gabrielle turned safe in the building as the mortals shooed them off, thinking they were seagulls, and put up some loud honks that they used to move birds away. The monsters got irritated and confused and flew off. She told her father, but decided to rig it off instead.

The next year, she applied as a tour guide in the site, and turned sixteen when she was approved after training, since her knowledge of the place was outstanding. She started small, until she easily led tour groups which included the higher class people and a lot of foreigners. Her constant reminder of her dad when she was away was her bronze bracelet and necklace. And everyone admired her, also her beauty, especially a girl wannabe who was working for a modeling agency and was desperate to find a new model. He spotted Gabrielle as he joined the tour on the site. After the reporting, he went up to her talked about the agency and asked if she wanted to be a model. This excited Gabrielle, and told her dad immediately, whom approved on it for he knows she likes those kind of stuff.

The model agency guy was very happy upon hearing this and immediately booked flights for them, and said hello to New York. Gabrielle was introduced, then trained as a model on the same year she left El Salvador. She was quickly approved, and now ran on stages with the high class dresses, her dad still on support. She became popular on magazines, but another incident led her to knowing about who she really is.

One of the workers there, Myra, who was also a demigod child of Aphrodite, sensed something different from Gabrielle. She watched her until the day that an empousa attacked Gabrielle. Gabrielle was walking down the alleys on New York when she met another pretty girl. They talked, and the girl brought her somewhere far from people, but with Myra watching closely and ready. And then all of a sudden, the girl pounced on Gabrielle, which Gabrielle accidentally just sidestepped. It came for her again, causing the bracelet to be cut and flipped up high. She screamed, but a bronze sword cam down on the monster, hitting it on the head. Gabrielle, not knowing what to do, took the sword and crashed its blade on the empousa's stomach. It still lunged, but was stabbed from the back by Myra, who now knew Gabrielle really was a demigod, with her own sword. Myra took Gabrielle's sword and flipped it up, which then went back down as a bracelet.

Without another word, she pulled an aghast Gabrielle to her car and drove her to Enrique. She told Enrique everything, with Enrique telling himself he was a fool for not realizing it, since Myra was a friend of his when they were young and knowing that she is a demigod. Enrique then easily guessed that the woman before was Ariadne, since she left the labyrinth necklace for Gabrielle and understood it all. Myra then made Gabrielle stay for a few days to absorb it all up. During the stay, a lurking hellhound attacked them, but Myra managed to kill it. A second came, this time by Gabrielle, using her own sword to surprisingly stab it underneath before it gets to land on her. Then Myra made her pack her things. Myra promised her she will take care of her dad, and all of them rode in Myra's car to Camp Half-Blood, which she knew where and that is an hour away.

During the ride, they said their goodbyes to each other, hugging and crying and repeating the words "I'll miss you and I love you" all over again. They soon reached camp, with both adults escorting Gabrielle to the borders. They both told her to be strong, and she promised to them that she will. They said their last good byes as she went in the camp.

A Celestial bronze sword that magically turns into a simple, bronze, chain bracelet and vice versa, enchanted by Ariadne.

hey there summers guess who's back! anyhow I saw your claim soo I thought you would like someone to comment on your claim (Hope thats ok? cause I saw all the work you did and all. Anyhow this is my first claim in weeks soo excuse me if I miss anything

anyhow thats all the problems I see hopefully it'll get claim :)

Yeah, welcome back Mel! ( you forgot your sig xD)

Anyways, agriculture is fine for underage kids as long as the parents know about it—if the work is about the farming. If it's about being a tour guide, still okay, as long as they have the head manager's approval and the skills needed and that the parent knows about it, too. Gabrielle's dad does know. And the archeological site is really a tourist attraction, with her dad being a friend of one of the managers of the site, who explores them all over. They go there because they love the Mesoamerican history and artifacts, so yeah. The attack, I've decided to make them distracted to another thing, another demigod or something. :)

ehh I forgot my sig? guess I was soo excited to come back that I forgot... >.< annyway I guess I can accept the labor law (even if I have my doubts) still I now have new questions.. like.... isnt 15 a bit too old for the first attack? (your allowed to argue your point summer dear) still I can accept the bird attack yet I would suggest you defeat them with some noise rather than using the public as the mist exist you know? My last concern is when her father's friend brought her to camp... two demigods more attack soo you might want to add a few monster attack considering the distance and all

(remembered my sig this time!)

) Um, 15 years old may be good since she's living in an isolated place in her country, and the country does have a lot of isolated places. The bird attack ....I used your suggestion. xD.  And the monsters' attack, done. Hope that's good enough.

This claim has been approved as a daughter of Ariadne. You now need to make a page for them and a word bubble, if you aren't sure how to do this you can see the guide here. Once you have done that you can add your character's name to the cabin list located on the cabin pages and start role playing with your new character. If you have any questions feel free to ask a member of the Admin team.

Retrieved from "https://camphalfbloodroleplay.fandom.com/wiki/Claiming:Camp/Gabrielle_Javier?oldid=1609189"
Community content is available under CC-BY-SA unless otherwise noted.