Personality: George is such a tomboy. She likes it when things get rough and loves sports as well as video games. She is also a computer freak at heart and is a total geek when it comes to pokemon. At times, there will be days when George is playing a video game for two days straight and having no sleep makes her really cranky so people tend to be extremely careful around her if this does happen.

Weapon: battle axe that transforms into a bangle 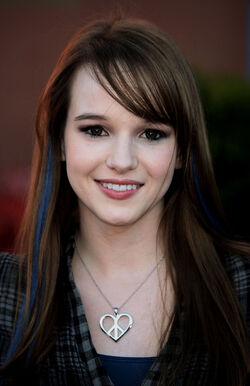 Violet Winston was a young maid for a very rich man. The rich man (her boss) had many parties and she and the other maids were always there to clean up the mess afterwards. Sometimes at the parties, they had to entertain the male guests, meaning they sometimes had to have sexual intercourse with them. In one party, Violet caught one handsome man's eye and immediately dragged her into a room to have intercourse with her. Being used to this, Violet let herself be dragged and had sex with the handsome stranger. After that day, she never saw him again.

About a couple of months after, Violet saved enough money to find her own house (since she lived in her boss's house because she had no other place to stay). She even had enough to get herself a doctor and all of the other things she needed. Her first check up with her doctor said she wasn't pregnant (all of the maids frequently went to doctors to check if they are pregnant or if they have an STD). But the next week on her second check up, her doctor said she was pregnant. Violet, being only in her mid 20's that time, freaked out because she wasn't ready to raise her own child. She didn't want abortion though, because she didn't like it. She also didn't like the sound of foster care so she decided that even though she's very young, she'll still raise the baby. So after nine months, she gave birth to a girl and named her Georgia, after her grandmother.

Georgia really hates her name because it sounded so girly, so she always went by George. Growing up, George hung out with the guys. She was very tomboy and preferred pants and shorts over skirts and dresses. (It was rare to actually see George in a dress.) She took karate and was very skilled in it. She often help her mother in her mother's work and became a part time maid at the rich man's house (on the weekends) so George was forced to wear a maid's uniform, which she really hated. (that was age 13 when she started the part time maid job) In school, George would always had to hide the fact that she was a part time maid.

The first day of her part time job did not go so well for George. She was 13 that time and a hellhound attacked her in the quieter part of the garden that was outside. A teenage boy who was about 15 saw her getting attacked and morphed his necklace into a sword. He quickly disintegrated the monster and helped her with her wounds after. After a boatload of questions, the boy introduced himself as Josh McCoy. Josh was a son of Deimos who was working at the rich man's house to support his family (his mother and his sister). He told her all about the gods and how they would have affairs with mortals once in awhile. He then told her that she is a demigod, but doesn't know which god parent is her father. (she told him earlier that she only had a mother) She believed him but didn't tell her mother that the man she had sex with 13 years ago was actually a god. Seeing that she has no intellect with dealing monster attacks, Josh said that he will personally train her the things he know about disintegrating a monster.

Every weekend, Josh and George would practice sword fighting in his backyard of his house when his mother and sister weren't there. One day, (age 14) a harpy attacked out of the blue and went for Josh. George freaked out a bit in the start of the attack but calmed down since a friend of hers was in danger. Using the skills Josh taught her and a celestial bronze sword he let her borrow, she disintegrated the harpy but got a couple of scratches along the way. George then fixed up Josh's wounds and called it a day for the training session.

At age 15, she was walking by herself in her house's backyard and a Stymphalian Bird attacked her (her mother wasn't at home). Using the sword Josh lent her (he let her borrow a sword of his until she gets her own weapon), she disintegrated the Stymphalian Bird, but because of it's talons, she got a couple of scratches on her legs and that left some scars. The next day, George asked Josh if he can some how get her a weapon that she can own. Josh said he can try to ask his a friend of his, who was a child of Hephaestus, to help her out.

At age 16, Josh started telling her about Camp Half-Blood and how there were others like them. George asked him why he wasn't there and he told her that he left because he wanted to live a normal life. He stayed only for two years but had immense training courses so he's prepared for almost any monster attack that comes to him. George also asked him where was it located and how to get there (future reference) and he told her. After their regular practice sessions they had, George was about to go home, but another monster attack occurred. This time it was two harpies who attacked George. Since Josh was still there, he was able to help her by attacking them and making them pay attention to him more than George. George then used the sword (the borrowed sword, original owner is Josh) to attack one of the harpies to help Josh out. Josh then defeated the other harpy he was battling.

At age 17, Josh knew that George needed to go to camp half-blood. So he offered to drive her there. George said she wouldn't leave her mother by herself but Josh pointed out that if she kept being around her mother, she will eventually be hurt sometime. Realizing this, George reluctantly packed her things and told her mother she was going to transfer schools to learn more about software engineering (which is something she is very skilled at). Knowing she wants to pursue her dream, Violet let George go to the 'school'. Josh drove her down to the camp and they had no difficulties getting there (meaning no monster attacks). Before George left, Josh gave her a present so that she can remember him. He handed her a bangle (the only piece of jewelry she wears) and told her that could morph into a battle axe (which she would learn how to use later on in her training). George hugged him and thanked him for the gift and walked into camp. Josh then drove away and two seconds after that, she was claimed as a child of Hephaestus.

Wow, I am highly impressed, but perhaps elaborate on what she does as a really young kid?

that was the third paragraph and that was basically all she did.

This claim has been approved as daughter of Hephaestus. You now need to make a page for them and a word bubble, if you aren't sure how to do this you can see the guide here. Once you have done that you can add your character's name to the cabin list located on the cabin pages and start role playing with your new character. If you have any questions feel free to ask a member of the Admin team.

Retrieved from "https://camphalfbloodroleplay.fandom.com/wiki/Claiming:Camp/Georgia_Winston?oldid=1339299"
Community content is available under CC-BY-SA unless otherwise noted.