Name: Glacia Godly-parent-Boreas Appearance: Glacia used to be tan but now her skin is very pale almost transparent like ice. Her skin also is very cold to touch. She used to have brown eyes and brown hair but that also change, now she has silverish blue hair and blue eyes . 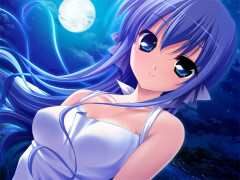 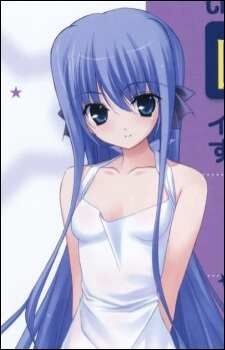 Species: Ice Nymph Personality: Unlike her appearance and skin temperature, she is very warm inside. She’s caring, loving and sweet, she loves making new friends. She’s also very confident and optimistic. She’d die for her friends again if she had to. Weapon: Her powers and an ice whip she carried when she was a demi-god History: Glacia was born to Boreas and Icy in Port Rico, she had a nice life. She had all she wanted. She was a great artist, she loved drawing and had lots of awards. She also was given a charm bracelet which tansforms into an ice whip. One day a satyr, along with a Hades kid and another Boreas kid. On the way to camp, a giant hellhound appeared. The hellhound was so strong that all of them were wounded from battling, that’s when Glacia decided to risk her life. She told the satyr and her friends that she’ll live, no matter what, the satyr made her promise that he’ll see her face once again and she promise him and her friends. After the promise, the Hades kid used all his strength to go to camp half blood by shadow travelling with the satyr and Boreas kid. After 5 minutes of fighting, Glacia’s body gave-up and she died. When she was in the Underworld, she was classified as a hero, however, Boreas wasn’t contented, and he wanted his daughter and her bravery to live forever. Hades agreed to this, because he believed, “a life for a life”, he was impressed by her character in the Underworld and because Persephone loved Glacia as her own daughter that she wanted her to live again. After all the drama, Hades set free Glaica’s soul and body and Boreas turned her into the first Ice Nymph. As an Ice Nymph, Glacia can: -Freeze items like water for about 20 minutes but the longer the more it drains her -Can use the cold wind as a shield or to boost speed -Can create items from ice like a volley of ice shards but the bigger the more it drains her -Can camouflage in places that snow or has ice -Can withstand all weathers, even summer since Boreas just modified her mortal body, but if shes wounded the colder the weather ther better "Broken_fire♥ Now Smile!X3 " 12:57, March 19, 2012 (UTC)broken_fire

There's only one problem with this, tomorrow is the first day of Spring in America, which means no ice at camp, which means no life force, which means, even if I claim this now, you won't be able to rp her until next winter.

What if Boreas modified her body? He kept her body when she died because he wanted her to continue her previous life, Hades agreed since it was unfair his son got to live contunually?But Boreas wanted an eternal servant too so made her body immortal?Is that okay? "Broken_fire♥ Now Smile!X3 " 11:39, March 20, 2012 (UTC)broken_fire

Boreas has alot of kids what exactly made her so special that he wanted her to live forever. User:Travelg

Could it her possible 1: boreas really loved her mother and her 2:Boreas saw all the nearly all the gods have servants of their own and he wanted one so Glacia was there and she proved great character. Plus, it was easy to ask Hades for help since Persephone was there and Hephaestus owed him a favor since he helped him trap aphrodite and ares?So good timing and he doesn't want something good to be wasted and not of his use anyways he loses nothing?"Broken_fire♥ Now Smile!X3 " 00:24, March 21, 2012 (UTC)broken_fire

But Boreas is in the north, so why would he need a servant at camp? Sorry, but it really doesn't make sense. Bach says you can either have this accepted now but not rp until November, or it can be denied and you can just try again later when it's the right time for an ice nymph. So choose, please? Like, if Picasso made a person, You'd be his masterpiece.

Ugh..Now that you mention it, can I chose to make her or not, she'll only rp in winter but can I decide if Im not gonna create her..cuz Im not sure I should and Im not sure I should not.So can you accept this claim but I MIGHT not make the character?Cuz Ima think for a while"Broken_fire♥ Now Smile!X3 " 11:51, March 21, 2012 (UTC)broken_fire

Um, well, I'll put it on hold, and you can think about it and decide, but I really can't accept if you may not make a char. But take your time :) Like, if Picasso made a person, You'd be his masterpiece.

Okay, remember, only use her during the winter months. For where I lay, it's you I keep; This changing world might fall asleep.

This claim has been approved as ice nymph. You now need to make a page for them and a word bubble, if you aren't sure how to do this you can see the guide here. Once you have done that you can add your character's name to the cabin list located on the cabin pages and start role playing with your new character. If you have any questions feel free to ask a member of the Admin team.

User:RubyRose17
Retrieved from "https://camphalfbloodroleplay.fandom.com/wiki/Claiming:Camp/Glacia?oldid=1222253"
Community content is available under CC-BY-SA unless otherwise noted.