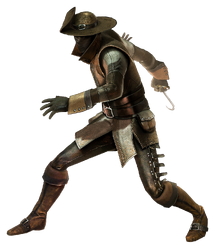 Close up of the veil he uses. 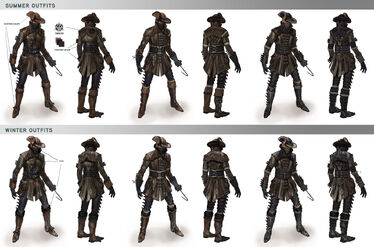 He wears different clothes during the seasons. 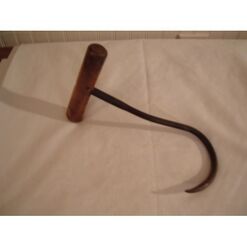 His hook.
Add a photo to this gallery

Personality: He is a very edgy and shady character. Being a hired gun during the revolutionary war he is rather heartless and uncaring of others. He is doesn't fall in love easily, but the people he loves he's 100% loyal to and will give his life in a second if theirs is spared.

History: It was 1757 on a cold winter night when Diana was about to close her tavern. Her tavern was rather popular amongst the colonists. One night a new comer came into town and asked for everything on the menu. He was obviously thirsty and hungry so she made it as fast as she could. He paid her rather well which caught her attention. The man said his name was Anthony, but it was secretly Zeus. He knew she could see through the mist which caught his attention at first, Zeus and Diana began to talk and later began to date. After a few weeks she had sex with him and 9 months later on Dec. 22nd 1758 Haython was born.

Diana rather hated Zeus due to his leaving during her pregnancy. He said how he was a god and loved her on a letter he left on her bedside. She didn't believe it one bit and thus raised Haython to hate the gods. He was raised within a rather peaceful area of Boston until he was 12. He was walking around The Province of Massachusetts Bay and he heard gunshots. Being rather curious he peaked around the corner only to hear 3 more gunshots and see 5 people dead on the ground near British Troops. He ran as fast as he could home and told his mother who expected this to happen sooner or later. She wanted him to be safe so she'd walk him to and from school everyday and kept an eye on him while he was outside. She grew very overprotective of him and rather smothered him. When he was 15 he began to work at his mom's tavern and made rather a lot of money as he was very good at communicating with people and got them to enjoy their stay at the tavern.

He turned 17 and soon enough the Revolutionary War began. While he was 16 he rather enjoyed secret things. He liked finding hiding and making up his own secret codes. He began to think about joining the American Military and asked his mother. She refused to allow him to sign up so he ran. He packed his things and ran off to sign up. They saw his age and refused. He argued that he was just 1 year under yet they still refused. He then ran off and decided to just kill as many redcoats as he could. He needed a place to stay so he took apprentinceship under a carpenter. It became rather obvious that Haython was good at creating and building things and he rather enjoyed it. During the day he'd be an apprentince but during the night he was the "Nightstalker" a well known masked delinquite especially known for killing red coats.

He was used any method he could to take out as many red coats as possible but usually used a meat hook the most. Haython never caught the attention of his father and was never given any kind of weapon or anything such as that. There for he thought his father was simply a pig that used women for sex. He despised him. After a few months of being the "Nightstalker" he was finally ended. He was on a mission to take out a small 10 person camp. He had taken out the lookouts so that was 6 left, soon only 4 were left and those 4 were all around the campfire. He took out two but was easily shot by 2 already loaded muskets and began to slowly bleed to death hearing the rude remarks of the 2 British soldiers. They decided to unmask him and were surprised to see a 17 year old.

Haython thought it was the end. To simply die on the ground being rudely remarked by some low life soldiers. But Nemesis saw him and took pity on the boy who never saw his father or even heard of him. She healed him and thus he would kill those 2 soldiers. He continued his life through the Revolutionary War as the "Nightstalker" and after, began a carpenter and retired the "Nightstalker" who had become a Robinhood like character.

Nemesis then told him what happened on that night as he hadn't known. He thought he had just gotten lucky. She explained the Gods and Goddesses and about his father Zeus. Haython grew into a rage and told Nemesis how much he hated his father. She understood and told him about Camp Half-Blood but he refused to go as he might see his old half-siblings which he wanted no part of.

He continued to be a carpenter and adapted rather well to the changes of time. He went heavily in depth with conspiracies and hacking. He absolutley loved hacking things and taking apart computers but that wasn't enough. He also grew into conspiracies now doesn't trust anyone. After a few years he was asked again by Nemesis about camp. He had grown much wiser over the years and thought about it. He finally decided to go but simply so he could see what it was like. He now resides at camp and simply hopes to be by himself without anyone.

This claim has been approved as a revenge spirit. You now need to make a page for them and a word bubble, if you aren't sure how to do this you can see the guide here. Once you have done that you can add your character's name to the cabin list located on the cabin pages and start role playing with your new character. If you have any questions feel free to ask a member of the Admin team.

Retrieved from "https://camphalfbloodroleplay.fandom.com/wiki/Claiming:Camp/Haython_Williams?oldid=1222669"
Community content is available under CC-BY-SA unless otherwise noted.