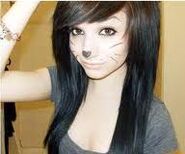 Heather's Mom, Megan met Thanatos in a men's club where she worked.

It was a normal day for Megan, wake up at 11:00, get dressed, put on some random make-up, and drive the Maudy Mens Club. After Megan had checked in with her boss, she went and started flirting, with random men, but one man in particular kept looking her from across the room. A few minutes passed by, and the man was still looking. So Megan walked over to him, flipped her hair over her shoulder, and squatted down right by the man.

The man looked at Megan and winked, smiled and with a grin said, "I'd like to buy you for the night." Megan was shocked but naturally she said, "O-h-kay," and walked the man up to the counter so that he could pay for her use. The man payed with gold coins that he pulled out of his pocket. The cashier didn't want to take them, but when the man glared at him, the cashier could hardly move fast enough to cash the coins, and give the man change.

Megan took the man back into the loitering area, and down a hallway, took another turn and into a hallway filled with open doors. Megan walked to the second to last door on the left, stood at it and waited for the man to walk into the room. After the man walked in and sat on the edge of the bed, he began to take of his shoes, and Megan walked in, shut and locked the door, and began stripping.

Megan woke up in the bed, and the man was gone but there was a note in her bra, explaining who her bed buddy was. After Megan finished reading the note, she tucked it back into her bra, and walked out to the "Locker room" and collected her clothing. She quietly began putting her clothing on, reached to grab her keys, but they weren't there, instead there was another note, she put this one into her pocket and began her trek home.

9 Months later Megan was in the hospital getting ready to give birth to her baby girl, Heather. Megan had forgotten all about the notes, but while she was sleeping in the hospital one night, another note appeared, this one finally had legible words on it, "I am Thanatos, Our daughter is a demigod." Four hours later, Megan had had her baby, and had a week to stay in the hospital until she and her baby were released.

On nights that Megan worked, she had to hire a babysitter to watch Heather, and that lifestyle went on for a long time. Upon Heather's 8th birthday, a man in black showed up and watched the entire birthday party from a distance, Thanatos was watching Heather and everyone thought he was just a man reading the Saturday News on a bench in the park.

Heather, was still growing, and soon she was thirteen, Heather, her mom and Heather's friend Marian were shopping in a clothing outlet in the local mall, when a clothing rack started rustling. And out jumped a hell hound. Heather's friend, Marian, who was also a satyr, kicked the Hell-Hound in the face, grabbed Heather and Megan's arms and ran them out of the store.

Marian practically moved in with Heather and her mom after that incident. Another two years had passed with no incident, Marian and Heather were getting ready to go to school when two Hell-Hounds came flying through the sliding glass door in the back of the house, Marian screamed at Heather and Megan to get in the car and go to Camp. As soon as Heather and Megan were in the car, Marian turned around, kicked off her shoes, pulled out two Celesitial Bronze knives, threw them both into the first dog, and then ran out into the garage.

Marian ran to the car, ripped open the door, and climbed in, slamming the door behind her, while Megan floored the gas and began driving away from the house. After they got out of town, Megan drove Heather and Marian both to Camp Half Blood.

How was an untrained demigod able to fight that well against two hellhounds?

So the satyr took 2 hellhounds on alone?

This claim has been approved as Daughter of Thanatos. You now need to make a page for them and a word bubble, if you aren't sure how to do this you can see the guide here. Once you have done that you can add your character's name to the cabin list located on the cabin pages and start role playing with your new character. If you have any questions feel free to ask a member of the Admin team.

Retrieved from "https://camphalfbloodroleplay.fandom.com/wiki/Claiming:Camp/Heather_Sicizli?oldid=1523652"
Community content is available under CC-BY-SA unless otherwise noted.